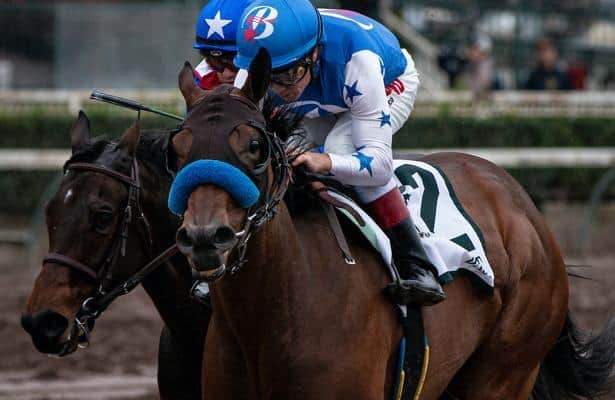 Bast turned back odds-on favorite Donna Veloce in the stretch Saturday at Los Alamitos while reasserting herself near the top of the 2-year-old filly division with a win in the Grade 1, $300,000 Starlet Stakes.

Third when last seen in the Breeders’ Cup Juvenile fillies — that day behind Donna Veloce, the runner-up to British Idiom — Bast has now won three races. All were in Grade 1 company, with this latest score continuing trainer Bob Baffert’s dominance of juvenile racing at Los Al.

Baffert had just more than an hour prior won the Los Alamitos Futurity (G2), while another victory in the Starlet gave the Hall of Famer a sweep of both races for the third straight year.

"She'd been training really well coming into this race — much better than when going into the Breeders' Cup," Baffert said.

A daughter of Uncle Mo campaigned by Baoma Corportation, Bast got the jump on a field of five and led at every call, clicking off fractions of 22.80 and 47.22 seconds over a wet track in southern California.

Donna Veloce appeared apt to press about a neck back throughout. But when it came time to kick on in the stretch, Bast turned back her top rival, finishing 1 1/16 miles in 1:43.36 under jockey Drayden Van Dyke.

It was well back to K P Dreamin in third. Another of Baffert’s entries, Gingham, was fourth with Roadrunner’s Honor fifth to round out the order. The Top 4 in this field earned qualifying points to next year’s Kentucky Oaks on a 10-4-2-1 basis.

Bast broke her maiden in the Del Mar Debutante (G1), then stretched her speed around two turns in Santa Anita Park’s Chandelier (G1). In the Breeders’ Cup, she chased early leader Two Sixty, then briefly took the lead before fading over a deep track. Two Sixty ran last, while British Idiom and Donna Veloce battled to the wire from off the pace.

"When we brought her here," Baffert said of Los Al, "we thought she'd run so much better on this more of a dirt surface here, where we're dealing with a lot of deep sand (at Santa Anita) and she struggles there with her body type.

"I didn't say anything to Drayden. He just rode her the way he felt. We knew that Donna Veloce, she was going to be really tough. You have to gut it out to beat a really good filly like that. I knew it was going to come down to the end like that."