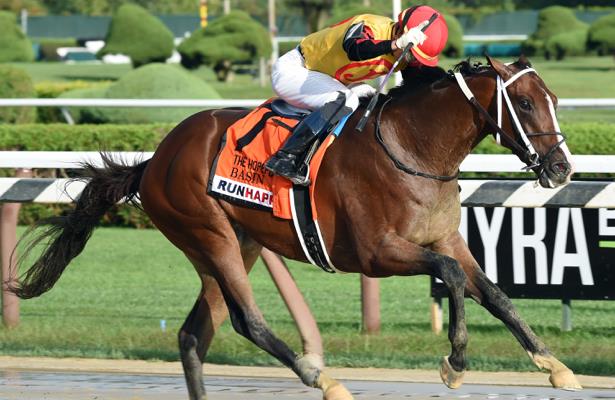 Following a second-place finish in the Arkansas Derby that continues to sow controversy, Ryne Poncik, one of the owners of Jackpot Farm was optimistic about Basin’s chances in Saturday’s Grade 2 Blue Grass Stakes after seeing his recent workouts.

“Steve [Asmussen] said it was perfect work,” Poncik said. “He couldn’t really blow out a candle coming off the track so he is fit, ready to go.”

The son of Liam’s Map last appeared in the Arkansas Derby (G1) at Oaklawn Park. His last win came in September of 2019, in the Hopeful Stakes (G1) at Saratoga.

Poncik said that the Arkansas Derby was a good experience for the colt to have under his belt, and the time off since the race has been extremely beneficial.

“The Arkansas Derby really took a lot out of him trying to keep up with Charlatan all the way around there,” Poncik said. “This nine weeks, he’s got good weight and he’s really looking good.”

The Arkansas Derby might turn out to be even more rewarding for Basin, as the controversy surrounding Charlatan’s positive test for Lidocaine might lead to disqualification for the Bob Baffert-trained colt, giving the official victory to Basin.