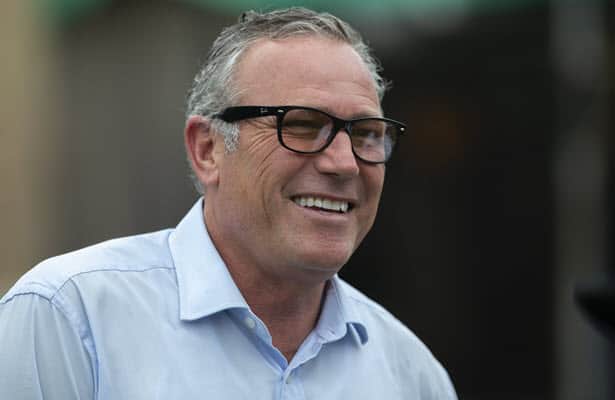 After a whirlwind six weeks that saw him win his first Santa Anita Derby (G1) and saddle his first Triple Crown starters, Tim Yakteen was back to a more normal routine Wednesday at Santa Anita.

A day earlier, Preakness starter Armagnac returned from Pimlico and was bedded down in Yakteen’s shedrow at Santa Anita. He joined classic-starting stablemates Taiba and Messier, each of whom have settled in after finishing off the board in the Kentucky Derby.

With the Triple Crown run now at an end for those former Bob Baffert trainees, Horse Racing Nation caught up with Yakteen to see what might be next for those colts and more.

Armagnac. It was ambitious placement sending this colt cross-country to run in a classic just two weeks after winning a Santa Anita allowance. Sent off the longest shot on the board in the Preakness, Armagnac showed the way for more than three-quarters of a mile before faltering to a seventh-place finish.

“I would have liked to have hung around a little bit more,” Yakteen said of the effort.

With five starts this year – including four in 10 weeks – Armagnac will take things lightly before returning to work, likely in the middle of June.

“We’re just in a regrouping stage, and we’ll figure out our campaign,” Yakteen said.

Taiba, Messier. Both of Yakteen’s Kentucky Derby starters are in light training at Santa Anita before gearing up for summer campaigns, which could include return trips east for some of the big-money 3-year-old races, such as the Travers (G1) and Haskell (G1).

“They’re back and they’ve been training. We’ve just lightened up on them a bit before getting ready for some of the summer classics,” Yakteen said.

Messier faded to 15th in the Kentucky Derby after racing close to a hot pace. Taiba, the Santa Anita Derby winner who ran for the roses with only two starts under his belt, finished three spots better in 12th under the twin spires.

“They both are doing great and in excellent shape,” Yakteen added.

Messier, whom Yakteen previously said could target shorter races moving forward, sports a record of 7: 3-3-0 and earnings of $435,600. He was second in the Santa Anita Derby in his first start for Yakteen after being transferred from the suspended Baffert.

Taiba won his debut at Santa Anita on March 5 prior to the Santa Anita Derby. He was a $1.7 million auction purchase by Zedan Racing.

Doppelganger. The Into Mischief colt failed to qualify for the Kentucky Derby while with Baffert after finishing second in the San Felipe (G2) at Santa Anita and fourth in the Arkansas Derby (G1). Transferred to Yakteen after Baffert's suspension, he was cut back to a one-turn mile in the Pat Day Mile (G2) and was no match for winner Jack Christopher when sixth on the Kentucky Derby undercard.

“I thought he ran respectable,” Yakteen said of the effort.