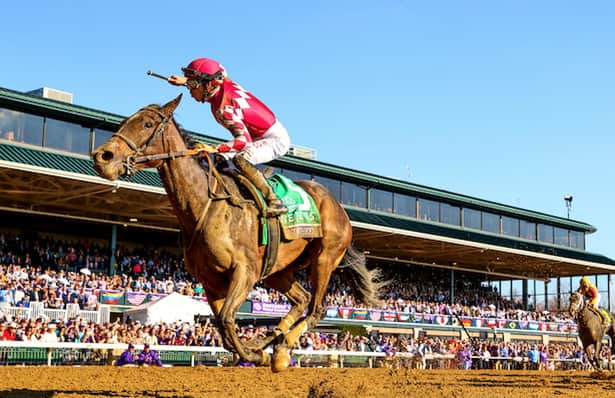 Hall of Fame Trainer Mark Casse has a likely Eclipse Winner in his barn after Wonder Wheel won the Breeders' Cup Juvenile Fillies last weekend. But she's not his only talented young filly.

Casse told Horse Racing Nation this week that "we have six or seven fillies that have the potential to go on and be nice horses."

But first, Wonder Wheel. The daughter of Into Mischief is 4-for-5 this year, with the loss coming in a second-place finish in the Spinaway (G2) at Saratoga. She led gate to wire in the Alcibiades (G1), holding by a nose, then rallied from last place to win by three lengths in the Breeders' Cup Juvenile Fillies.

Casse said he “saw a big difference” in Wonder Wheel between the Alcibiades and the Breeders' Cup.

In the Alcibiades, he said, “she had everything go her way. And I thought maybe she just pulled herself up. She made the lead so easy. That's what I was hoping because she got lucky, some of the horses had a troubled trip in the Alcibiades. She had a great trip.”

Then came the Breeders’ Cup. “I don't have wow moments very often. But that was kind of a wow moment. I've said all along, good horses win when things go their way. Great horses can win when nothing goes right. And it was rough from the start.

“Tyler (Gaffalione) and I had talked about it, we thought there was a lot of speed in the races. So we figured we'd be settling back fourth or fifth, possibly. But she didn't come away from there running. And then she started picking up as they went down the backside. And look, Tyler gave her an unbelievable ride. But it takes a really good horse to do what she had to do. He had to check her for probably 50 or 60 yards at about the half-mile pole and just let everybody go on their way while she was sitting idle. And then of course, he got the room along the rail. And I mean, he went through spaces not everybody would go through – horse or rider.”

REPLAY: Wonder Wheel wins the $1 Million @NetJets #BreedersCup Juvenile Fillies on #FutureStarsFriday at @keenelandracing! Congrats to all of the connections! pic.twitter.com/smmIRhtcxE

Casse is optimistic about next year because Wonder Wheel “still has a lot of maturing to do. She's a big, tall filly that hasn't filled out completely. So there's a lot of room for growth.”

For now, though, “she's getting a little break in Ocala. I haven't really decided yet which direction we're going to head. We've had a lot of luck in New Orleans. So could go that direction or Miami. I think starting off, we'll go against fillies. But later on, depending on how well she does on her comeback, we could flirt with possibly the colts.”

Here’s a rundown of other talented 2-year-olds in Casse’s stable for the latest in HRN’s Barn Tour series.

Webslinger was Casse’s other Breeders’ Cup starter, finishing 10th in the Juvenile Turf. Before that, the Constitution colt won a black-type stakes at Monmouth Park after starting 0-for-2. One unexpected factor in the Breeders’ Cup was that jockey Dylan Davis was unable to fly in for the race, so John Velazquez took over.

Webslinger “got very unlucky” at Keeneland, Casse said. “Johnny took over and we talked about it in the paddock and we said we've got to save ground because in these turf races you need everything to go your way. And of course, he was wide on both turns. And then Johnny said when he got running, he said he just couldn't get a clear path. I still like to see that horses have good energy after a race. And I mean he galloped out with the winners. So I think his race was much better than it looked on paper.

“I think he could end up being a really useful horse.” Casse said. “He's going to become a gelding here this week, and he can have a little bit of an attitude and we don't want to get too far down the road and then wish that we had gelded him. So we're going to go ahead and do that this week.”

Overall, Casse thinks Webslinger is “a pretty good horse. He ran at Saratoga and he nearly went over the hedge and still came on and finished second. And then he had a bit of a troubled trip even at Monmouth and was able to overcome that. I think he's a horse that is going to get better and better, and I think making him a gelding's definitely going to help him.”

The trainer isn’t sure what’s next for Webslinger, but he thinks a race such as the Belmont Derby (G1) could be a good fit.

Boppy O also could have run in the Breeders’ Cup thanks to a win in the With Anticipation (G3) on turf at Saratoga. But his only other win came in his debut, and he finished ninth last out in the Street Sense (G3) on dirt at Churchill Downs.

“That was just a disastrous day. The track was so bad. I was wanting to give him another try on the dirt. Unfortunately, we learned nothing. We learned that he doesn't like the mud. He got beat a long way. So he's back home, going to have a little break. And he'll kind of do the same thing as Webslinger, look for possibly a race at Gulfstream or Tampa or even the Fairgrounds.”

Personal Pursuit, a 2-year-old Tapit filly, is a horse “that I really like a lot,” Casse said. “She broke her maiden at Aqueduct impressively in her second start. And she came back and we ran her in the Matron (G3, fifth-place) and she just had a horrid trip and came running late and I think that filly's really talented.

Casse ticked off other 2-year-old fillies who “have the potential to go on and be nice horses.”

• Ryder Ryder Ryder is a Quality Road filly who has won her only start, scoring on the Tapeta at Woodbine. “I think ultimately she's going to like the grass.”

• Ticker Tape Home is a daughter of Medaglia d’Oro who broke her maiden at Woodbine on her fourth try and then finished second against colts in a listed stakes there.

• Renegade Rebel is a Nyquist filly who “won very impressively a couple of weeks ago at Woodbine,” breaking her maiden on her fourth try with a seven-length win.

The Gun Runner colt was second in last year’s Breeder’s Cup Juvenile and went 0-for-6 last year, though he ranked in the top 20 among Kentucky Derby qualifiers after earning points in four prep races. He finished second to Jack Christopher in both the Pat Day Mile (G2) on the Derby undercard and the Woody Stephens (G1).

“We gave Pappacap some time off, and he's doing really well. Probably he'll make his first start down at Gulfstream at some point in an allowance race.”

Casse said Pappacap likely will begin breezing next week, noting that his Florida operation was bracing for a hurricane.

Who’s the Star, a 4-year-old son of Tonalist, was another graded-stakes winner for Casse last weekend. He scored in the Autumn (G2) at Woodbine for his second graded win in a row and fourth win in his last five starts.

“That horse is unbelievable,” Casse said. “I mean, if you watch his races, you would think at the top of the lane he has no chance. He's really excelled on the Tapeta. Well, I mean everything. I think he's got three track records. Just can run all day. I'm going to run him in the Valedictory (G3) at Woodbine.”

Filo Di Arianna is a 6-year-old son of Drosselmeyer who won his last two starts in the King Edward (G2) and Connaught Cup (G2). “He was injured after his last win. And he's been home, starts probably back in training in about 30 days.”

Souper Hoity Toity is a 3-year-old Uncle Mo filly who won three of her last four starts, including the Ontario Colleen (G3) and Selene (G3). “She's done well. She's back in Live Oak, having the winter off and she'll be back next year.”

“They went through it,” Casse said, and they’ll take the winter off in Ocala. ”I like letting our 3-year-olds grow up and become older horses. This is something I've been doing for years where once the 3-year-old deal is over, I bring them home and give them a few months off.”

Fev Rover is a 4-year-old filly who finished third in the E.P. Taylor (G1) last out and rallied to win the Canadian (G2) by a nose before that. She’s “a possibility for the Matriarch (G1) at the end of the year at California.”

And Our Flash Drive, second last out in the Ontario Matron (G3), is entered in Saturday’s Bessarabian (G2) at Woodbine.