Barn Tour: What's next for Sconsin, Foley's other top talent? 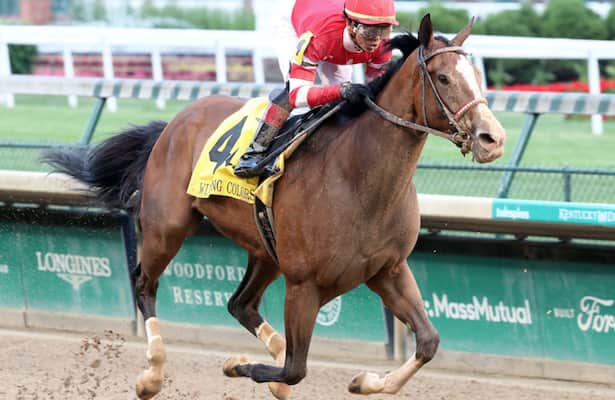 Greg Foley has had an outstanding last several years, getting his first Kentucky Derby horse with Major Fed last year, and following it up with O Besos in this year’s Run for the Roses. The trainer has had several other outstanding horses in his care recently, including Sconsin, who won the Winning Colors (G3) on Saturday at Churchill Downs.

Foley provided updates on some of his top stable talent and up and comers to Horse Racing Nation.

The fifth-place finisher in the Kentucky Derby likely will return to the races on Saturday in the Matt Winn (G3) at Churchill Downs. Foley said the decision wasn’t final but that the Orb colt probably will run.

“We’re going to enter (Wednesday) and pay that to look at it,” Foley said.

As for what could come next, Foley said the Ohio Derby (G3) at Thistledown could be a post-Matt Winn appearance. Foley also said O Besos has looked good in training.

“He was feeling great (Tuesday) morning,” Foley said. “It’s still several weeks until the Ohio Derby, it’s not till June 26 – still got several breezes in him between now and then.”

The filly earned her first victory of 2021 Saturday in the Winning Colors (G2) at Churchill Downs, which followed a second-place finish in the Derby City Distaff, where she was only beaten by Gamine.

The 4-year-old by Include will next race in the Roxelana under the twin spires on June 19.

“We’re going to run her here,” Foley said. “She loves Churchill right here at home where she can walk out of her stall.”

After that, Foley said, she likely will be pointed toward the Ballerina (G1) at Saratoga in August.

“She looks great,” Foley said of how the filly came out of her most recent race. “Prancing around there this morning, she was a handful to walk. She looks good.”

Foley’s 2020 Derby horse has not raced since his 10th-place finish in the Run for the Roses. He recently returned to the work tab, and Foley said he will return to racing in the next several weeks, starting out in allowance company.

“He’s really doing great,” Foley said. “He’s probably two, three works away from running. He’ll be in at Churchill before the end of the meet.”

Foley was optimistic about the Ghostzapper colt’s future.

“We’ll have some fun with him this summer, this year.” Foley said.

The 4-year-old Into Mischief filly has won her last two races, including an allowance effort going six furlongs on the Churchill Downs main track on April 29.

Foley said she will run another time in an allowance race and that she eventually should take on stake company.

Foley pointed to the 3-year-old Alternation filly as an up-and-comer in his barn. She broke her maiden on fourth asking in her most recent race at Churchill Downs on May 8, going 6 1/2 furlongs on the dirt.

The filly will run in allowance company next time out.