Barn Tour: What's next for Fast Boat, 10 others in Sharp's stable 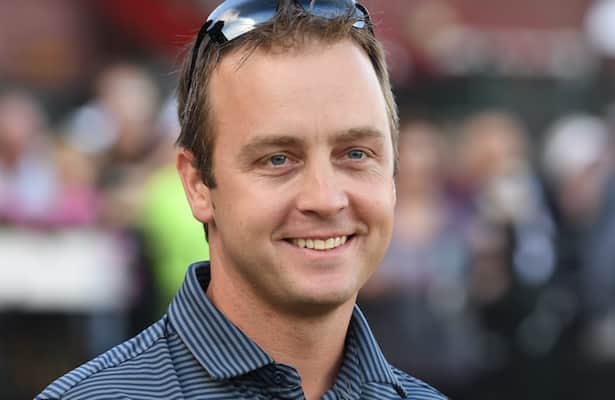 Joe Sharp is coming off a fine Kentucky Downs meet, compiling a record of 3-3-3 from 17 starts.

But that record also reflects disappointments, such as when Fast Boat finished fourth in the Turf Sprint Stakes (G3) after winning the Troy (G3) in his previous start and the Twin Spires Turf Sprint (G2) in April.

Sharp keeps most of his horses in Louisville, with a small string in New York. He said he is doing well since his second surgery last year after he had a benign brain tumor removed.

"I've got to go back for a checkup next month, but so far, so good. I've been getting on horses every day. I got on seven today. So yes, I've been back riding and running and things like that.

Sharp took a few minutes Monday to discuss his promising runners with Horse Racing Nation for the latest in our Barn Tour series.

Fast Boat. The 6-year-old gelded son of City Zip has a career record of 27: 10-1-3, but this year's graded stakes wins were his first. Of the Turf Sprint Stakes, Sharp said, "We were very optimistic going into that race and we really, really had a tough trip. We just basically just had nowhere to go the entire trip and were locked in, never really got a chance to run. I think that'll be his last race and we're going to point for the Breeders Cup Turf Sprint off of that. We definitely didn't take anything away from his effort that day. On Saturday, he basically had plenty of horse and nowhere to go. So that's just racing luck. That's where we are with that. But you know, definitely still proud of him. I don't have any reservations in pointing to California at this point for the Breeders' Cup."

Logical Myth. The 5-year-old son of Data Link is having a good year, with a record of 7: 2-2-1. "Logical Myth's doing well, he's actually at our farm. The owners and I talked about, he never had a break really since since we've claimed him (in May 2020) and who knows how long before that. So after his race at Mountaineer, we decided to take him to my farm here in Kentucky, and he's going to come back in training Oct. 1 to target the series at the Fairgrounds that he had some success in last year." After winning the listed Colonel E.R. Bradley and Buddy Diliberto Memorial, Logical Myth finished second in the Fair Grounds Stakes (G3) in February and third in the Muniz Memorial (G2) in March.

Catch a Bid. A 5-year-old daughter of Real Solution, she finished second in the Ladies Sprint Stakes (G3) at Kentucky Downs on Saturday. "We were really, really pleased with her performance at Kentucky Downs the other day. She just ran a huge second, just got beat. She's shown me an affinity for going short, long, so that's huge for opening up her options. We'll probably target something at Keeneland or Belmont this fall."

Summer in Saratoga. After winning the listed Indiana General Assembly Distaff in July, this 5-year-old daughter of Hard Spun finished seventh in the Kentucky Downs Ladies Turf Stakes (G3). "We were a little disappointed the other day. She got a very wide trip all the way around, and she just basically was a little bit flat. But we're going to regroup, and she's a nice filly. So we'll probably try to target something at Keeneland with her as well. If not, she's definitely shown a liking for the Fair Grounds. So we'll take her down there and target those series in New Orleans with her."

Midnight Tea Time. The 6-year-old gelded son of Midnight Lute has won only an allowance at Keeneland in the last year, and he finished third in the Tapit Stakes at Kentucky Downs last week. "He ran a great race the other day at Kentucky Downs. We're probably going to run him in an optional $100,000 claimer up at Belmont first week in October."

Flint Ridge. The 3-year-old Into Mischief colt broke his maiden on second try last month at Saratoga. "Flint Ridge is running Saturday night at Churchill, he'll be in a one-turn mile, first-level allowance race. He's transitioned well since being back here to Kentucky and definitely a horse we think that'll have a bright future and looking forward to getting him a little more distance in the one-turn mile."

Cruz Bay. After starting her career this year with four starts through June, this 3-year-old Broken Vow filly graduated at Kentucky Downs with a 4 1/4-length win. "She's doing well. She came out of the race well, and we're going to probably target either something at Keeneland, like a first-level allowance there, or wait for the Fair Grounds with her as well. She's another one that I think she's a little bit better sprinting but can also go the flat mile if we need her to. I think ultimately the Pago Hop (at Fair Grounds) would be an end-of-the-year kind of goal for her."

Misthaven. This Candy Ride filly broke her maiden on debut at Kentucky Downs. "We're really proud of how she ran first time out. She overcame a lot to win, as far as her trip was concerned that day, and showed a lot of heart, a lot of maturity. And so I think we're going point her, as long as we can, we're going to to point her for the Jessamine (G2) at Keeneland with hopes of getting some graded earnings to get closer to the Breeders' Cup. I think our next start will definitely be around two turns."

Azamana Empire. The Classic Empire filly was second by a neck in her debut at Kentucky Downs. "She ran really impressive, just got beat first time out. And so we're going stretch her out to a mile."

Lady Danae. This Klimt filly broke her maiden on debut at Saratoga and then finished fifth in the Ainsworth Stakes Sunday at Kentucky Downs. "We drew the 12 hole and just got stuck wide all the whole trip at Kentucky Downs yesterday. We're definitely disappointed with the outcome but not with her effort. We're going to target the Grade 3 (Matron), Oct. 9, I believe, at Belmont, going six furlongs. That'll be her next race."

Manasota Sunset. She broke her maiden on second try in July at Ellis Park then finished third in the Ellis Park Debutante Stakes in August. "She's going to point to a non-two allowance going two turns at Keeneland."