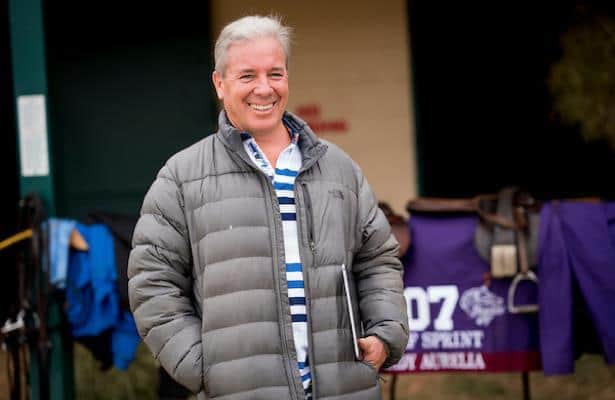 Wesley Ward, like many of his best horses, is enjoying a winter break. He was set to leave his Keeneland base this week and head west for a ski trip in Montana with his children.

Ward can celebrate a 2021 season that saw his runners win 10 graded stakes, including two Breeders’ Cup events. Twilight Gleaming gave the trainer his third straight Juvenile Turf Sprint score Nov. 5 at Del Mar and then Golden Pal flew to a win one day later in the Turf Sprint.

Before he left for the slopes, Ward spoke with Horse Racing Nation for a Barn Tour to discuss Golden Pal, Twilight Gleaming and some of his other prominent runners.

The Breeders’ Cup returns to Keeneland in 2022. Golden Pal will look to score his third win at the World Championships and his second on home soil.

Golden Pal is scheduled to start his march toward the Breeders’ Cup over that same Keeneland lawn in the Shakertown Stakes (G2) on the track’s opening weekend in April. The next target likely would be the King’s Stand Stakes (G1) in June at Royal Ascot.

If all goes well for Golden Pal in Kentucky, England and beyond, he could travel late next year to the southern hemisphere to end his 4-year-old season. The sprinter’s Coolmore owners want to get him a race in Australia, RSN reported last week.

A start in Australia would come after the 2022 Breeders’ Cup, BloodHorse reported, and Ward confirmed.

“Hopefully he’ll be able to transfer his American form to the Southern Hemisphere and as well to Europe,” Ward said. “On the grass, he’s unbeaten in America. Anytime you’re going to another country or even another hemisphere, it’s a big ask. But if ever I had a horse to do it, this is the one.”

Twilight Gleaming. After back-to-back starts in Europe, Twilight Gleaming returned to the U.S. and held off a late rally from Go Bears Go to win the Breeders’ Cup Juvenile Turf Sprint. The National Defense filly finished ahead of two of her stablemates, Kaufymaker (third) and Averly Jane (fifth).

Twilight Gleaming competed as a juvenile at Royal Ascot, running second in the Queen Mary Stakes (G2). Ward said another trip to that meet is in the cards for 2022, with the Commonwealth Cup (G1) her likely target.

Like Golden Pal, Twilight Gleaming also is scheduled to prep for Royal Ascot with a Keeneland stakes start. Hers likely will come in the Limestone Turf Sprint against fellow 3-year-old fillies.

Bound for Nowhere. Ward owns and trains Bound for Nowhere, a son of The Factor who is training toward an 8-year-old campaign in 2022. As a 7-year-old, he won Keeneland’s Shakertown for the second time in his career.

With Golden Pal pointing to that event, Ward said Bound for Nowhere is likely bound for California to make his first start of the season.

“I definitely don’t want to run him against Golden Pal,” Ward said.

Santa Anita hosts the $100,000 San Simeon Stakes (G3) for turf sprinters on its downhill course Feb. 20. Bound for Nowhere competed in that event in 2020, finishing second.

Like the King. Ward’s 2021 Kentucky Derby starter is resting at an Ocala, Fla., farm with plans to return to his trainer’s stable in January.

Like the King won one of his seven starts this season, taking Turfway Park’s Jeff Ruby Steaks (G3) in March. That win punched the Palace Malice colt’s ticket into the Derby, where he finished 12th.

In each of his final four starts of the season, Like the King raced on the turf. He will likely start his 4-year-old season on the all-weather track at Turfway, Ward said, then run again during Keeneland’s April meet.

Arrest Me Red and Kimari. Both these graded stakes winners will relocate to Florida at some point this winter, but Ward has not been in a hurry to ship them south.

“I just have been reluctant to send them down there because up here at Keeneland, we’re able to turn them out every day, during the day in the sunshine and the warm weather,” Ward said on a 66-degree afternoon in Lexington, Ky. “They get to go in their own paddocks as well as train on the track here at Keeneland.

“When the weather starts to turn, that’s when they’ll head down to probably Payson or Palm Meadows, one of the two.”

Arrest Me Red finished his 3-year-old season with three straight stakes wins, including a Grade 3 score in October’s Belmont Turf Sprint Invitational. The Pioneerof the Nile colt is 5-for-7 lifetime.

Kimari scored her first career Grade 1 win in April’s Madison Stakes on the main track at Keeneland. The 4-year-old Munnings filly did not start again until the Breeders’ Cup Turf Sprint, where she finished seventh, six lengths back of stablemate Golden Pal.

“Once we get them down (to Florida) and get a few works, we’ll look at the stakes schedule and away we’ll go,” Ward said.