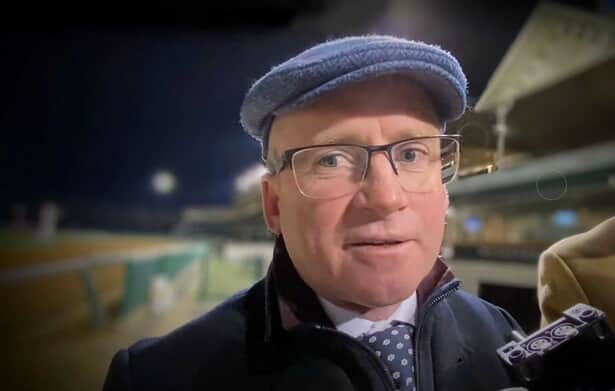 On the back of a career year in 2021, trainer Brendan Walsh has been enjoying yet another.

It was Maxfield who headlined Walsh’s $7,564,526 in earnings last year. This year the 49-year-old native of Ireland totaled $8,325,119 through November. He is five wins from equaling his single-year high of 81.

His star this year has been Santin, who collected Grade 1 victories at Churchill Downs in the Turf Classic on the Kentucky Derby undercard and in the transplanted Arlington Million last August.

“He’s had a great year,” Walsh said. “Any horse that wins two Grade 1s, two million-dollar races, and runs second in a Grade 2 (Muniz Memorial presented by Horse Racing Nation), for a horse who had only started running last September, it’s quite remarkable.”

In a phone interview from his barn office at Palm Meadows Training Center in Florida, Walsh discussed Santin and nine other standouts in his stable as part of this Horse Racing Nation Barn Tour.

Santin. The 4-year-old Godolphin homebred by Distorted Humor peaked with his victory in the Arlington Million. He since finished ninth as the favorite in the Keeneland Turf Mile (G1) and fourth Saturday at 7-2 odds in the Seabiscuit Handicap (G2) at Del Mar. It was his 10th race since his debut only 14 months ago. “We’re just going to give him a little break now and then decide where we go from there,” Walsh said. “He hasn’t had any time off, really, since he started racing. We’re going to give him a brief freshening and then bring him back.”

New Year’s Eve. Owned by a partnership led by Qatar Racing, the 3-year-old Kitten’s Joy filly who won the Edgewood (G2) on the Kentucky Oaks undercard was turned out since her fourth-place effort in the Dueling Grounds Oaks in September at Kentucky Downs. “She’ll be due to come back to us here at Palm Meadows,” Walsh said. “Normally with a lot of turf horses, we bring them back at Christmas or the first of January and go from there. You’d hope she’d make us a very nice 4-year-old. She should be right up there with the best of them next year.” Walsh did not have a particular next race in mind for New Year’s Eve.

Cazadero. Also owned by Qatar Racing and partners, the 4-year-old Street Sense gelding followed his six-furlong triumph in the Nearctic (G2) at Woodbine with an 11th-place finish at 33-1 in the 5 1/2-furlong Breeders’ Cup Turf Sprint. Walsh said the Joe Hernández (G2), a 6 1/2-furlong grass race for older horses Dec. 31 at Santa Anita, might be Cazadero’s next stop. “He needs to go a little further,” Walsh said. “I think he found the Breeders’ Cup race a little sharp for him. When he won the Nearctic, obviously six (furlongs) was perfect for him. … We feel he needs a dash or an extra little bit of distance, because he’s kind of an in-between sprinter.”

Temple City Terror. The 6-year-old Temple City mare stepped up to graded competition this year since she was sold for $600,000 to Louise Courtelis and her daughter Kiki Courtelis. She peaked with consecutive wins in the Dowager (G3) last month at Keeneland and the Long Island (G3) on Friday at Aqueduct. Walsh said Temple City Terror was not quite ready for retirement. “We’re going to keep on cracking on with her,” he said. “Where we’re going to go next, I don’t know. We’ll probably give her a run or two at Gulfstream with the longer filly-and-mare races over the winter. That’ll decide whether she stays in training or whether she goes to the breeding shed. She doesn’t look like she’s ready to go to the breeding shed yet going off her race last week. … She’s probably in the prime form of her career.”

Prevalence. Bred and owned by Godolphin, the 4-year-old colt by Medaglia d’Oro may get a start in Florida in the last hours of 2022. “He loves Gulfstream,” Walsh said, “so a crack at the Mr. Prospector (G3, seven furlongs) there on Dec. 31 is a probability there.” Prevalence won the Commonwealth (G3) in April at Keeneland. After he was seventh in the Churchill Downs (G1) on Kentucky Derby day, he got a five-month break before he ran fourth in a $140,000 allowance sprint in October at Keeneland. “He’s working here at Palm Meadows, and he’s working well,” Walsh said. “I don’t really know what to make of his race at Keeneland. Maybe he’s getting a little older now and he needed that race off the bench.”

Flirting Bridge. The 4-year-old Camelot filly owned by John Halley and Ciara Hogan was just a maiden winner in nine starts racing for trainer Henry De Bromhead in her native Ireland. Since she was shipped across the pond to Walsh’s barn, Flirting Bridge has hit the board in all four of her starts. Since winning an allowance race in May at Churchill Downs, she finished second in the Dr. James Penny Memorial (G3), took third in the Canadian (G2) and was promoted from third to second in the E. P. Taylor (G1) nearly two months ago at Woodbine. “We gave her a little break as well,” Walsh said. “She’ll be due back to Palm Meadows here soon. She ran a very, very good race in the E. P. Taylor. She was lightly enough raced this last year, so she should have a huge year in front of her. She could be a top filly in the country next year.”

My Philly Twirl. The John Gallegos homebred filly by Hard Spun is likely to return to where she began her 3-year-old campaign with a three-race winning streak. “We’re probably going to run her back at Gulfstream in the Tropical Park Oaks (on Dec. 26),” Walsh said. Graduating to graded company proved to be a tall task for My Philly Twirl. She finished eighth in the Edgewood (G3) on Kentucky Oaks day, got a nearly five-month break, won an allowance race at Presque Isle Downs and then finished eighth in October in the Valley View (G3) at Keeneland. “I won’t say she needed the last run, because she had a prep,” Walsh said. “We’ll get her back to there, and hopefully she’ll be competitive.”

Business Model. Bred by Godolphin and sold to Qatar Racing for $130,000, this 4-year-old Candy Ride gelding out of the Bernardini mare Innovative Idea came back from a nearly 11-month break last summer and won two allowance starts in his next four races. Now he may be ready for stakes company at Fair Grounds. “Business Model has gone to New Orleans,” Walsh said. “We’ll probably have a look at the Tenacious with him on (Dec. 26).”

Pretty Mischievous. As the second choice Saturday in the Golden Rod (G2), this 2-year-old Into Mischief filly out of the Tapit mare Pretty City Dancer finished third to Hoosier Philly, missing second by a neck after winning maiden and allowance races at Churchill Downs. “I always thought she was going to make a nicer 3-year-old, but she’s won two nice races, and I thought she ran a good race the other day,” Walsh said. “It was her first time around two turns, she was drawn ‘1,’ so it was the first time she had gotten crowded down inside like that. She learned a lot, because she’s a smart filly. We’ll probably find her at some of the (Kentucky) Oaks trials over the winter.”

Twice As Sweet. Walsh saw something special in this 2-year-old Candy Ride filly bred and owned by Godolphin. Out of Snowbell, another Tapit mare, Twice As Sweet won by 6 1/2 lengths last month in the six-furlong Smart Halo Stakes at Laurel Park. “She absolutely won for fun that day,” Walsh said. “We’ll probably bring her down to New Orleans for the (six-furlong) Letellier (on Dec. 26) and then go from there.” Rather than direct Twice As Sweet on the road to the Kentucky Oaks, Walsh felt like he had a sprint standout in the making. “She’s got a lot of speed, so I don’t know how much she’ll stretch out,” he said. “We’ll stretch her out gradually. If she keeps being able to do it, we’ll know.”