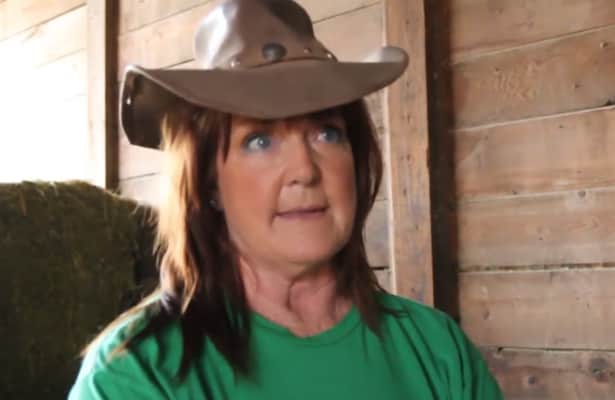 A year-and-a-half ago, Valorie Lund sold her home in Phoenix with plans to buy a farm in Kentucky. "But we haven't bought one yet."

So for the time being, at least, “I’m a gypsy,” the veteran trainer said. "I bought a 42-foot RV. I have been in Minnesota, I've been in Kentucky, I've been down at Oakland and I've been in Florida. And I'm not sure where I can call home right now.”

Right now, she's in Minnesota with her mother, Marylou Holden, who is a partner in racing as well as traveling. Lund's sisters, Leslie Cummings and Kristin Boice, also are involved in owning and breeding horses.

And it's in Minnesota, at Canterbury Park, where Lund had six horses entered on Wednesday's card, which Horse Racing Nation’s Ed DeRosa previewed this week.

That’s a sizable chunk of her 26 horses, and she provided a rundown of what to expect Wednesday for HRN’s Barn Tour series.

Exxel is a 3-year-old colt by Tale of Ekati and owned by Cummings, and he's entered an allowance optional-claiming race. "He's my pick of the night. If I was going say who will win or has the best shot to win, I would have to say it'd be Exxel." The colt broke his maiden in April in his fourth start and is coming off a June 9 allowance win at Canterbury.

Asena, a 3-year-old Coast Guard filly with two straight wins, was entered in the Curtis Sampson Oaks. “I buy a lot of horses – not a lot, I buy a couple of year out of Washington, because I'm from the West Coast originally, and I usually attend the sale up there. I've had very good success buying young horses up there. So I purchased her for Barry and Joanie (Butzow) as a yearling very inexpensively, and she's just a very nice filly. She's stretching out to a mile on the grass after sprinting. But I actually think that whole line, that whole family, the Coast Guards do exceptionally well on the grass. I've had several – again, being from the West Coast, not a lot of people know who Coast Guard is, but he's Stormy Atlantic. And I think this filly will do well on the stretch out and well on the grass.”

Color Me Legendary, a 3-year-old gelding by Atta Boy Roy (owned by Lund) who broke his maiden on first try June 11, is owned and bred by Cummings and was entered in the MTA Stallion Stakes. “Nice little 3-year-old. We have very high hopes for him. I believe that he's good enough to win the Minnesota Derby. Sprinting's not really his game and yet he did win his first out sprinting, and he's back in a small stake on Wednesday going six and a half again. I think if the track is playing like it was (Sunday), it'll favor him because speed was not holding on. There's one filly in the race that's got a tremendous amount of speed. But she may not hold on for 6 1/2. So it'll be an interesting race. But yeah, I think he's a pretty nice colt.”

Mark of Valor is a 3-year-old gelding who was entered in a Wednesday claiming race. “He's going to be a good little sprinter. He's got to run six. And he's really a 5 1/2-furlong horse. He did win at six last time out. But again, if the track is playing like it was Sunday, speed was dying, closers were closing, and that's not going to help him (Wednesday). We'll see. It is evening racing. It was day racing (Sunday). Maybe with it being evening they can keep a little more water on the track and make it a little more fair, but (Sunday) it was all closers. None of the speed did any good.”

Lund also has two horses entered in the Dark Star Turf Sprint: Ship It Red, a 7-year-old gelding who is looking for his first win of the year, and Bodenheimer, a 5-year-old colt who is an also-eligible. Lund did not expect he would scratch into the race.