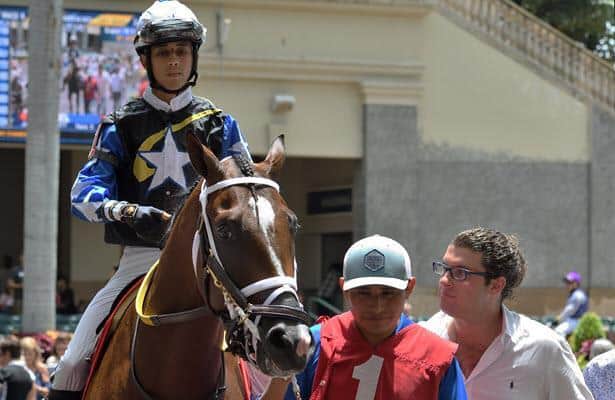 He has five graded-stakes wins: two with Mischevious Alex in the Gulfstream Park Sprint (G3) and the Carter (G1), two with Drain the Clock in the Swale (G3) and Bay Shore (G3), and one with Queen Nekia in the Royal Delta (G3).

Joseph also is leading the trainer standings at Gulfstream Park with 26 wins in 86 starts since the current meet began April 1 – a win rate of 30 percent.

Horse Racing Nation checked in with Joseph from his Gulfstream barn to get a status report on his top horses.

Mischevious Alex. "He's doing well. He's going to go to the Met Mile. He has probably two more works before then."

The Metropolitan (G1) is on the Belmont Stakes undercard on June 5. Mischevious Alex most recently worked a bullet 5 furlongs in 59.46 at Gulfstream on May 16.

Drain the Clock. "He's doing well. He's going to work a couple more times and then he's going to point to the Woody Stevens (G1) on Belmont day."

Winner of five of his seven career starts, Drain the Clock last worked five furlongs in 1:00.74 on May 16.

Tonalist's Shape. She is entered in a Gulfstream allowance on Saturday carded as the tenth race. "Hopefully she could run well off the layoff, and then possibly she would point to the Princess Rooney."

The 4-year-old filly's last start was a fifth-place finish in the Raven Run (G2) in October.

In her last out, the 6-year-old mare finished fourth in the listed Top Flight Invitational.

Island Commish. "He's on the comeback trail. He's still a ways from racing. He's probably not going to run for another six weeks. He started back working. He's had like three breezes so far."

The 4-year-old colt has not raced since a third-place finish in the black-type Showing Up Stakes in November.

Math Wizard. "He's back working but no target for him yet. He's probably like a couple more works away from running, and we'll get him back started in an allowance."

With a career record of 21: 3-3-3, Math Wizard is Joseph's only millionaire. He finished ninth in his last race, the Pegasus World Cup Invitational (G1).

Ny Traffic. "There's a slight possibility could run on Met Mile day. But I would say more realistic, we're going aim to Monmouth" for the June 12 Salvator Mile (G3).

The May 2 allowance, a seven-furlong sprint at Belmont, was Ny Traffic's 2021 debut, and he won by 6 3/4 lengths in a field of five. His prior start was a ninth-place finish in the Preakness Stakes in October.

Chance It. The 4-year-old colt, who hasn't raced since finishing fifth in the 2020 Tampa Bay Derby (G2), was entered in an allowance race at Gulfstream on Sunday, the ninth race on the card. "He's a pretty nice horse."

Sweet Bye and Bye. "She's a nice filly. She won a stake here at Gulfstream (the listed Sand Springs). She's going to run, possibly in the Just a Game (G1) on Belmont day or the Intercontinental (G3) the day before."

In January, the 6-year-old mare finished second in the Marshua's River (G3).

Promising 2-year-old: Of a Revolution has "shown quite a bit of ability so far. He's by Maclean's Music. He's probably going to debut in a week or so."