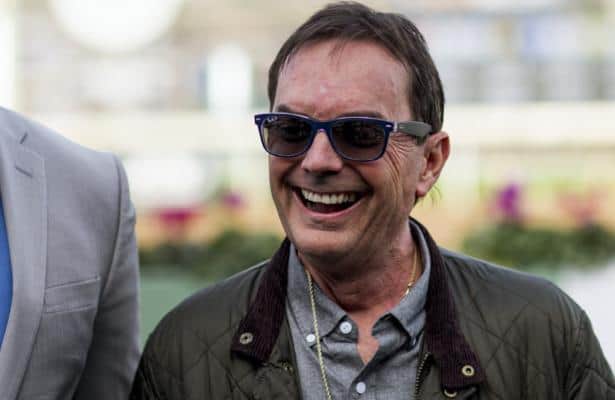 Trainer Peter Eurton got off to a quick start at Santa Anita earlier this week with two winners on Monday’s card and added a pair of minor awards with lightly raced maidens who look to have a future.

In addition, Eurton’s prospects for the new year soon will be buoyed with the returns of 2019 champion 2-year-old male Storm the Court and Dream Shake, a one-time prospect for last year’s Kentucky Derby.

Eurton, who has hit at a 15 percent clip this year while banking nearly $2 million in purse earnings through Thursday, recently spoke with Horse Racing Nation for this latest Barn Tour.

Storm the Court. It has been tough sledding for the champion ever since his 45-1 upset of the 2019 Breeders’ Cup Juvenile. The Court Vision colt lost his next 10 starts, capped off by a fifth place sprinting in the San Carlos (G2) in March before heading to the sidelines.

Storm the Court has been galloping at Santa Anita in recent weeks and is “very close to his first work,” Eurton said, adding that a turf campaign was likely in store for 2022.

“He looks very good. We’re thinking that he could be a very good turf miler or down the hill,” Eurton said. “Not that he can’t do dirt too, he obviously can, but we’ll probably start there and let him tell us.”

Dream Shake. Following an impressive debut win in February, he hit the Kentucky Derby trail and finished third in the San Felipe (G2) and Santa Anita Derby (G1). Electing to bypass the Derby, the connections instead put him in the Pat Day Mile (G2) on the undercard, where he pressed blistering fractions and was a game second by a head to potential champion sprinter Jackie’s Warrior.

From there, the son of Twirling Candy regressed in three subsequent starts, including the Woody Stephens (G1) and Oceanside Stakes on turf.

“He’s back in training and has been jogging for about three weeks,”Eurton said. “He’s probably going to start galloping any day now once the weather gets better. I hope to have him ready in March.”

Eurton said Dream Shake was fine physically when sent to the sidelines in August, “but he needed some time off. That race at Churchill seemed to fry him mentally.”

Dream Shake in 2022 is likely to target dirt races between one mile and a mile-and-a-sixteenth.

“I think that’s probably what he’s best at, whether it be one turn or two,” Eurton said. “But I’ll just see what he brings to the table when he’s training. You can always give him a race on the grass off the freshening to get him started, but I’m hoping he’s still a dirt horse.”

I Got a Gal. The first of Eurton’s two winners on Monday, this 2-year-od filly by Pioneerof the Nile was stretched out to a mile on grass and responded with a three-quarter length win despite a troubled trip.

The chart notes that I Got a Gal stumbled at the start, was forced to steady, then was rank early. Despite all that, she still managed to prevail under Juan Hernandez.

“I was so pleased for the filly,” Eurton said. “She grabbed a quarter leaving (the gate) and I thought we were (finished). But she showed an amazing amount of stamina, considering what had happened to her.”

Eurton believes she has found a long-term home on the grass.

"Pioneerof the Nile can throw turf horses, and the way she is put together, she looks like she wants to run on top of the track rather than digging into that deep dirt," he said.

I Got a Gal was a $150,000 auction purchase earlier this year by Exline-Border Racing. Eurton said he probably will look for an allowance race, but another option would be the $100,000 Sweet Life (G3) on the Santa Anita downhill turf course on Feb. 12.

Vantastic. The 5-year-old gelding by Dialed In was Eurton’s second winner on Monday, taking a six-furlong turf allowance by an impressive three lengths under John Velazquez.

“That’s the best that horse has run in ages,” Eurton said. “Looks like he’s starting to come around again.”

Vantastic has now won two of his last three starts to cap off a productive season with a record of 7: 3-0-0 and earnings of $96,100 for Ciaglia Racing and SAF Racing.

“The best thing in the world for him was castrating him,” Eurton said. “I remember when we shipped him over to Los Alamitos (last December), he was spent for the race before we even got into the paddock. He was just so studdish. But he’s matured nicely.”

Exultation. This productive 6-year-old gelding by Paynter is another nearing a return for Eurton. Off since July, Exultation has three wins and three seconds this year with earnings of $97,600 for C R K Stable. He has been working steadily since Halloween and could resurface in an allowance Sunday at Santa Anita. Entries will be taken on Thursday.

“He’s had a heck of a year for us,” Eurton said. “He’s one that gives you his all every time, regardless of class. He doesn’t win by many … but he’s as honest as the day is long.”

Lady Mystify. The 3-year-old Bernardini filly won the Remington Oaks (G3) in September and just missed as the favorite in the Nov. 23 Zia Park Oaks when getting run down late. She has yet to breeze since that effort, but Eurton said that could come this weekend.

“We’ve just freshened her up and she’s scheduled to work either Friday or Saturday,” he said.

“I’ve got her nominated for Houston and it’s a possibility, but I want to keep her on Lasix for at least another start,” Eurton said.

Oaklawn Park is one of the few tracks in the U.S. where Lasix is still permitted in stakes races.