Barn Tour: Sisterson is ramping up in Southern California 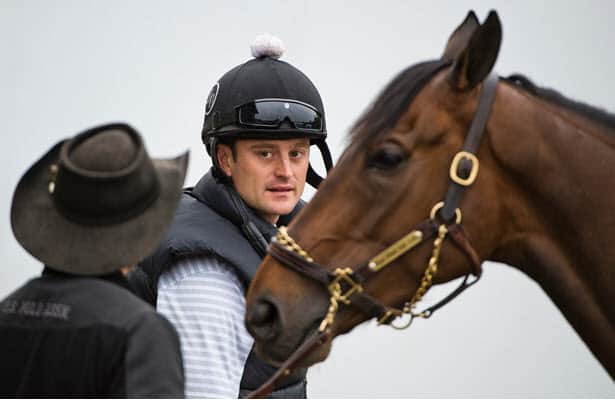 In early June, Jack Sisterson announced he would no longer train exclusively for Calumet Farm and instead would open a public stable in Southern California.

That transition has begun. Sisterson had three starters during closing weekend of Santa Anita, all owned by Calumet Farm, and currently has 11 horses bedded down at San Luis Rey training center in north San Diego County. He expects to have at least 25 stabled at Del Mar when its meet opens July 22.

At Santa Anita, which closed June 19, Sisterson was 0-for-3 with a runner-up finish in the Possibly Perfect Stakes with Scarabea. On Wednesday, the 37-year-old native of England told Horse Racing Nation his transition to a public trainer is moving full-speed ahead.

“I was supported in this decision by Calumet, to go from private to public, and really nothing has changed,” Sisterson said. “It’s been pretty simple.”

Sisterson trained privately for Brad Kelley’s Calumet Farm since the start of his career in 2018. Among his most notable runners for the historic Kentucky nursery are Grade 1 winners Channel Cat, Lexitonian, Vexatious and True Timber.

“This was a decision that was made before summer,” Sisterson said. “You obviously want to have a successful summer as that’s when the big races are that lead into the Breeders’ Cup. We thought with me going public this summer, this would be a great opportunity to potentially have some big wins and kind of expose yourself to pick up some new horses along the way.”

Sisterson is familiar with the Southern California circuit, having served as an assistant to Doug O’Neill for "eight or nine years." During that time, O’Neill's barn won a pair of Kentucky Derbies with I’ll Have Another in 2012 and Nyquist in 2016.

Sisterson said “it was either Saratoga or Del Mar” where he would plant his flag. Deciding on the seaside oval was a result of Del Mar’s “ship and win” program plus the current makeup of his barn, he added.

“I love New York. We won four (Grade 1) races in New York and I’m forever indebted,” Sisterson said. “But I just thought the horses we have right now in the barn were better suited to Del Mar. They did well down at Gulfstream with the faster course there this winter, and with the ones that kept in training, I thought they were better suited for the Del Mar track.”

“Our vision next year is we’ll do Del Mar and potentially Saratoga. Moving forward I think we’ll have an East Coast and West Coast string,” he said.

Among the more interesting runners to head west for Sisterson is Calumet’s Tango Tango Tango. The 4-year-old colt by Tourist is exiting a runner-up in the May 21 Dinner Party (G2) at Pimlico, which was his third start of the year after a six-month layoff. He is pointed to the Eddie Read (G2) at Del Mar on July 31.

“He’s really thrived from 3 to 4 and thanks to the farm for allowing me to give him a break during the winter and let him really mature into a really nice horse,” Sisterson said. “I don’t think we’ve seen the best of him yet.”

It is hoped a strong effort in the Eddie Read will propel Tango Tango Tango to the Del Mar Handicap (G2) on Sept. 3, a “win and you’re in” for the Breeders’ Cup Turf.

Kentucky Pharoah, a listed stakes winner, made his first California start in the American Stakes (G3) at Santa Anita on June 19. He showed the way for three-quarters of a mile before fading to last.

“He wasn’t 100 percent fit. … I did want to get a run in him before Del Mar, and it was perfect timing to try that spot," Sisterson said. "I thought it was a tough enough race.”

Next up for Kentucky Pharoah will either be the $100,000 Wickerr Stakes going a mile on turf on July 24 at Del Mar or a second-level allowance a week later.

As for Scarabea, she has two fourths and a fifth in her graded stakes this year, including the April 16 Jenny Wiley (G1) at Keeneland. In the 1 1 1/4-mile Possibly Perfect, Scarabea was beaten just a length by odds-on favorite Neige Blanche.

“She’s a filly that shows up every time,” Sisterson said of the 4-year-old daughter of American Pharoah. “I’ve ambitiously spotted her after just breaking her maiden at Gulfstream, going straight into stakes company. So I think that shows how much we think of her, talent-wise.”

Scarabea is ticketed for a Del Mar allowance on July 28.

“She will eventually win multiple stakes,” Sisterson said. “What I’ll do now is just drop her down a bit. I think she’ll enjoy a touch of class relief and let her get her head in front again. Then she’ll go into stakes company after that.”