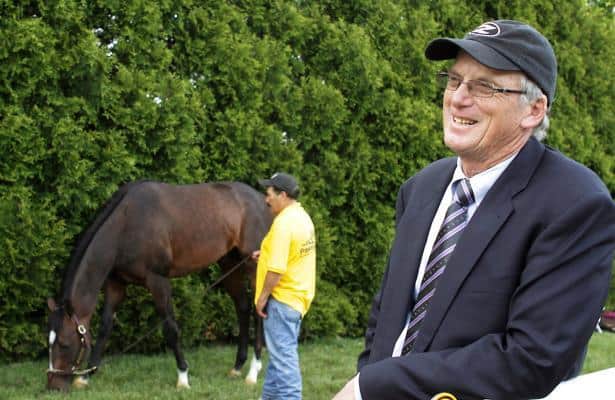 Trainer John Shirreffs has one horse ticketed to next month’s Breeders’ Cup at Keeneland. On Saturday at Santa Anita, he’ll try to add two more to the lineup.

Shirreffs on Wednesday entered flashy debut winner Justique in the $200,000 Chandelier (G2) for 2-year-old fillies and the well-regarded maiden Skinner in the $300,000 American Pharoah (G1) for 2-year-olds. They will try to join their stablemate Beyond Brilliant, winner of last weekend’s City of Hope Mile (G2) at Santa Anita, on the plane to Kentucky for the Breeders’ Cup on Nov. 5-6.

While going through his morning paces at Barn 47 on the Santa Anita backstretch Wednesday, Shirreffs updated his Breeders’ Cup prospects and other stable standouts for this Horse Racing Nation Barn Tour.

Justique. Shirreffs does not win often with first-time starters, which is what made this filly’s smashing debut on July 31 at Del Mar all the more intriguing.

By Triple Crown winner Justify out of the Bernardini mare Grazie Mille, Justique debuted going 5 1/2 furlongs on dirt. Given her classic-type pedigree, Shirreffs's reputation with young horses and a work tab that offered few clues, bettors let her go at 8-1 in a 10-horse field.

“Her works weren’t real fast,” Shirreffs said of Justique’s training ahead of her debut. “But she would just gallop along behind her workmate and then pass them at the end. So the only thing that really stood out about her was how easily she was doing it.”

In her bow, Justique broke dead last under Victor Espinoza. She remained in that position after an opening quarter-mile in 21.44 seconds set by Bob Baffert’s odds-on favorite Home Cooking. But on the turn, the whole complexion of the race changed. The chart noted that Justique “inhaled foes,” and it was an apt description. She blitzed around the turn while wide, changed leads at the top of the stretch and proceeded to blow past her rivals while Espinoza barely moved in the irons. She won by 2 1/2 lengths.

Home Cooking, who was third by three lengths, came back to be second in the seven-furlong Del Mar Debutante (G1).

Justique had to miss last month's Debutante because of an illness. Shirreffs said “we lost maybe a week or 10 days” of training because of the setback. She returned to work on Aug. 27 and has registered six breezes ahead of her two-turn debut in the 1 1/16-mile Chandelier.

Espinoza will be back in the irons Saturday. He and Justique will break from the far outside in a seven-horse field, which also includes Debutante 1-2 finishers And Tell Me Nolies and Home Cooking.

Justique is a half sister to Grade 1 winner Mo Town and was a $725,000 auction purchase as a yearling. She is campaigned by C R K Stable.

Skinner. After splitting a field of maidens in his debut at Del Mar in July, he was entered in the seven-furlong Del Mar Futurity (G1) and checked in third behind the Baffert pair of Cave Rock and Havnameltdown.

Skinner will get a second chance at Cave Rock in the American Pharoah on Saturday.

In the Futurity, Skinner was away slow and dropped back early. He began to make up ground on the turn and when straightened for the wire, he ran on nicely to get the show dough.

Shirreffs offered insight on the decision to go Grade 1 hunting early with the maiden colt by Curlin out of graded-stakes winner Winding Way.

“The 2-year-old year is very specific for horses. If you think you have a horse with talent, sometimes you take shots,” Shirreffs said. “We thought after his first race he was a closer and we liked the seven-eighths (distance) for him in the Futurity. So you roll the dice and see how it goes.

“I thought he ran really well,” Shirreffs continued. “He had a little trouble at the start and wasn’t used to having dirt in his face. So he didn’t level off for a while. But once he did, he finished very well.”

Skinner and Espinoza will break from post 7 in the American Pharoah, which attracted a field of eight, including four trained by Baffert. Skinner, who is also owned by C R K Stable, was a $510,000 auction purchase earlier this year.

Beyond Brilliant. In the aftermath of his win in the City of Hope Mile, Shirreffs was not sure whether the Grade 1 winner would move on to the Breeders’ Cup. It now seems that is the plan.

“I think so. Yeah,” said Shirreffs, who has won three Breeders’ Cup races in his career.

A 4-year-old colt by Twirling Candy, Beyond Brilliant collected his third graded-stakes win when scoring in the City of Hope by three-quarters of a length under Espinoza. In the spring, Beyond Brilliant won the Charles Whittingham (G2) at Santa Anita to add to his win in last year’s Hollywood Derby (G1).

“I thought he looked really good,” Shirreffs said. “Especially because he was kind of on a longer rein. Victor wasn’t trying to hold him back. He was just flowing and getting over the track really nicely.”

Also owned by Lee and Susan Searing’s C R K Stable, Beyond Brilliant has never raced outside of Southern California in his 14-start career. In the Breeders’ Cup, not only will he have to travel, he also will have to tackle a different type of turf course than is found on his local circuit.

“It’s hard to say (how he’ll handle it),” Shirreffs said of Keeneland’s sand-based turf course. “In California, we generally run on firm grass. I don’t know what the weather is going to be like back there. But I think he’ll handle it.”

Express Train. The 5-year-old Grade 1 winner reeled off three straight wins this winter, including the Santa Anita Handicap (G1). After a five-month break, he resurfaced in last month's Pacific Classic (G1) and checked in fourth behind the dominant winner Flightline. He returned in last Saturday’s Awesome Again (G1) and again was fourth, beaten about 6 3/4 lengths by winner Defunded.

“Of course we were a little disappointed,” Shirreffs said of the Awesome Again. “But he was in a terrible position stuck down on the rail. For him, he really needs to get to the outside. Victor never had a chance to get him out.”

He also expects Express Train to return for a 6-year-old season.

“I can’t really see why not,” Shirreffs said.

Zilkha. A 2-year-old filly by Candy Ride, she is the fourth foal out of multiple champion Zenyatta. Zilkha has been in mostly light training for Shirreffs while occasionally breezing. Her most recent work was Sept. 11 at Del Mar, when she cruised three furlongs in 38.4 seconds.

“We’ve worked her, given her some time, then worked her. She’s just immature,” Shirreffs said. “I don’t want to push her until her bones are firmly set. They’re not strong enough yet. So we just every once in a while breeze her, see how she does, and then go from there.”