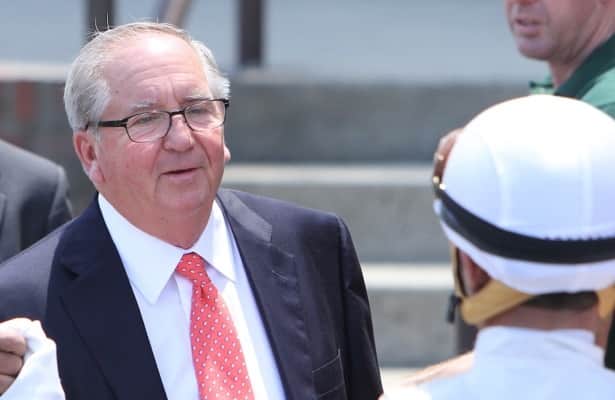 Hall of Fame trainer Shug McGaughey will learn a lot this weekend about whether Greatest Honour, winner of the Grade 3 Holy Bull, can keep that momentum going through Saturday's Fountain of Youth (G2) at Gulfstream and then perhaps on to the Kentucky Derby.

"He ran awfully well, he’s trained well since then, so this is just another step," McGaughey told HRN Thursday. "We feel pretty confident he’s going to run good. Most of the horses, we’ve run against — we haven’t Fire at Will, we haven’t Saffie Joseph’s horse (Drain the Clock). But we’ve got a lot of confidence in Greatest Honour and looking forward to Saturday."

In the Holy Bull, Greatest Honour rallied easily past his competition to win by 5 3/4 lengths.

On Saturday, McGaughey said, "hopefully the speed will be up in front of him and Jose can ride him just the way he did the last time."

Much has been made of the fact that McGaughey's other Derby winner, Orb, won the Fountain of Youth before going on to win the Florida Derby (G1) and then the Kentucky Derby.

McGaughey acknowledged the similarity, though he said it was not by design. He also noted that Orb won an allowance race between breaking his maiden and the Fountain of Youth. "Just as we were with him, we’re still looking to see what we’ve got. Hopefully his races can carry him to the next race."

McGaughey also provided a rundown on other horses in his barn — other 3-year-olds as well as his older horses.

Ten for Ten — After breaking his maiden in October, the 3-year-old Frosted colt was second in both the Nashua (G3) and the Remsen (G2).

"I hope he’ll be back racing sometime probably in June," McGaughey said. "He’s turned out up at the farm now, but his time’s about up, and we’ll be looking forward to getting him back. I think if we get him back, he could have an exceptional year."

Scarlett Sky — After winning the Central Park Stakes, the 3-year-old son of Sky Mesa won an allowance at Gulfstream in January and is entered in Saturday's Palm Beach Stakes.

Romp — This 3-year-old sired by Orb broke his maiden on Feb. 12 on his fifth try.

McGaughey said he "will probably come back in some sort of starter race" which he'll determine after the next after the next condition book comes out. "Maybe going two turns on dirt."

Deep Water Cay — This 3-year-old Pioneerof the Nile filly broke her maiden on debut at Gulfstream in January. McGaughey said he has entered her for a race on Sunday — "whether she’s in or not I don’t know?"

McGaughey also said he expects good things from Absolute Courage, an unraced, 3-year-old Into Mischief colt "that got sick last summer — in fact, it was on Belmont Day. I like him a lot, and I think that he’ll probably get to the races the first of April." He's been working at Payson Park, and "he’ll work out of the gate this weekend," McGaughey said.

He also brought up Bears Watching, a half-brother to Code of Honor who finished a close third in his first race on Feb. 6 at Gulfstream. "I think he could be a nice colt as we go along."

Among McGaughey's older horses, 5-year-old Performer is entered in Saturday's Gulfstream Park Mile (G2) after winning six of eight starts — including the Fred W. Hooper (G3) on Jan. 23. "He’s been training very well, had a real good breeze here last Sunday (four furlongs in a bullet 49.4 at Payson Park). I think he looks really good. Then again, we’ll run this Saturday and see what we’ve got."

Code of Honor is taking a break after his fifth-place finish in the Pegasus World Cup (G1). "He’ll probably run the first of April. He’s doing fine, he was just going to get a little bit of a break."

Mrs. Danvers, a 4-year-old Tapit filly, "didn't run very well" when finishing fifth in Saturday's Royal Delta (G3), which followed a win in the Comely (G3) at Aqueduct in November. She's pointed to the April 10 Top Flight at Aqueduct.

Six-year-old filly Civil Union, fifth in the Breeders' Cup Filly & Mare Turf after four straight wins, has no recorded works since then, but McGaughey said: "She worked last Sunday on the turf, she’ll work this Saturday on the turf. We’re just kind of looking for a summer campaign for her, we’ll get a race into her at Keeneland or Aqueduct, I just haven’t looked that far down the road. Hopefully she’ll be competitive in some of the long filly and mare races throughout the year."

McGaughey had two starters in the Pegasus World Cup Turf (G1): 6-year-old Breaking the Rules (finished ninth), who is turned out with Code of Honor and is expected back for summertime racing, and 5-year-old North Dakota (10th), who is pointed to a long turf race at Keeneland.

Vigilantes Way has had "a little bit of a break" since finishing fifth in the Marshua's River (G3). The 4-year-old daughter of Medaglia d'Oro will "have her first breeze on Saturday, since she ran, and I’m pointing her for a filly and mare stake on the grass and long, sometime in April."

The barn tour wrapped up with two horses that haven't raced since last summer. Creed won two of three starts last year as a 3-year-old. "If all goes well on a breeze this weekend, he runs on, I think it’s March 6, a week from Saturday," McGaughey said of the Honor Code colt.

And 5-year-old Top Seed went 5: 3-1-0 last year, with his last start an allowance win at Churchill Downs in June. "Top Seed hurt a cannon bone again, and we had to give him some time, and he’s breezing at Payson Park, had a good breeze last weekend. We’ll breeze again this weekend, we’ll look for a race around the first of April somewhere."