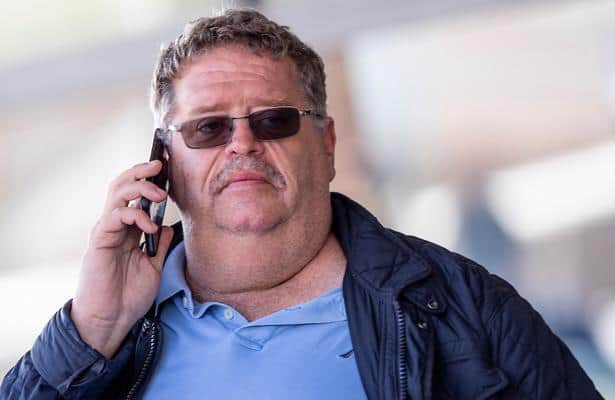 Photo: Eclipse Sportswire
Check out Barn Tours on Horse Racing Nation
Dale Romans has a stable full of younger horses with potential. One of them will run Saturday at Keeneland, while another is set to take on the Breeders’ Cup.

Romans this week updated Horse Racing Nation on some of his top young talent.

Strong Silent. The 3-year-old Wicked Strong filly will take on stakes company for the first time on Saturday in the seven-furlong Raven Run (G2) for sophomore fillies at Keeneland. After finishing second in her debut in July at Ellis Park, she broke her maiden on Sept. 17 at Churchill Downs going 6 1/2 furlongs.

Strong Silent will likely not be favored in the race, which features a field of 13 to go seven furlongs on the main track. Cilla and Souper Sensational are both entered in the race, as is Obigatory.

“I think she’s got to move up,” Romans said. “Step forward. She’s lightly raced but she can do it.”

Giant Game. After breaking his maiden by three lengths going 1 1/16 miles at Keeneland on Oct. 9, Romans said the 2-year-old Giant’s Causeway colt is bound for the Breeders’ Cup Juvenile on Nov. 5 at Del Mar. The colt will ship to California next Thursday.

“He’s done a lot of things right, I think he’s moving the right way,” Romans said. “Extremely talented racer. The race was slow the other day but he went the last sixteenth in just under six second and he went the last quarter faster than he went the first, and I think ability to finish is going to be extremely important out there.”

Red Knobs. Another top 2-year-old colt in Romans’ barn, Red Knobs finished third most recently in the Iroquois (G3) at Churchill Downs. He will likely run next in the Street Sense Stakes on Oct. 31 under the twin spires.

“He’s done very well,” Romans said. “I thought about taking him (to the Breeders’ Cup) but the owner has got another one in there so he doesn’t want to go.”

The Union Rags colt is owned by Jim Bakke and Gerald Isbister, who are also co-owners of Champagne (G1) winner and futures favorite Jack Christopher.

Red Knobs colt broke his maiden in August when going a one-turn mile at Ellis Park.

Mr. Bouma. Another of Romans’ juveniles, the Candy Ride colt finished sixth in the Breeders’ Futurity (G1) on Oct. 9 at Keeneland. He previously earned his diploma at Ellis Park in August.

“He didn’t run bad the other day in the Futurity,” Romans said. “I don’t know what I’m going to do with him. He’s one that could stay around for the Jockey Club.”

The Kentucky Jockey Club (G2) is set for Nov. 27 at Churchill Downs.

Mac’s Time. After finishing 11th in the Breeders' Futurity, Mac’s Time could be heading to New York for his next start.

“I would like to try to get him to the Remsen,” Romans said, speaking of the 1 1/8-mile, Grade 2 race on Dec. 4 at Aqueduct. “He had a bad post the other day, had a few other issues in the race. He’s a Not This Time, which is the hottest sire out there. I think a mile and an eighth, you could see him taking the lead and keeping on going.”

Howling Time Another 2-year-old colt by Not This Time, Howling Time earned his diploma on Sept. 25 at Churchill Downs.

“I think he’s as good as any of them,” Romans said. “He’s going to run in the Street Sense.”