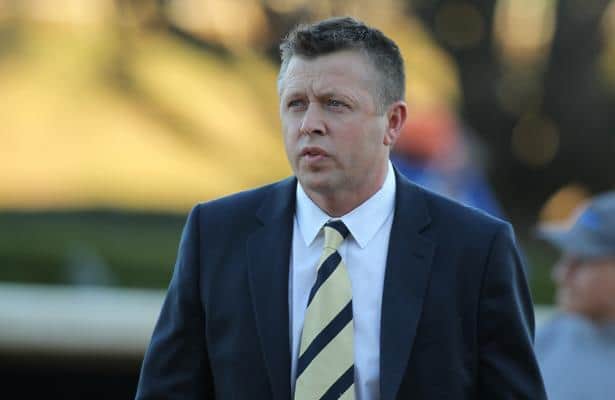 Photo: Eclipse Sportswire
Check out Barn Tours on Horse Racing Nation
Trainer Ron Moquett saw one of his geldings earn his first stakes win on Saturday, joining fan favorite Whitmore , who finished third in his most recent trip, the Churchill Downs (G1) on May 1, as a stakes winner for Moquett.

The reigning Eclipse Sprint Champion went seven furlongs in the Churchill Downs, where he crossed the wire just behind Flagstaff and Lexitionian. The colt will now point toward the True North (G2) on June 4 at Belmont.

“Usually if he puts his head in front, he’s tough,” Moquett said. “I think that there was not a whole lot of pace and that may have ahad something to do with it.”

Moquett said the 6 1/2-furlong distance suits the 8-year-old best, despite having had success at slightly longer distances in the past.

“I certainly like the way he’s come back and done everything,” Moquett said. “...I always feel more confident with him running under 7/8s.”

“There’s always someone the beneficiary of a good trip,” Moquett said. “You don’t get any missteps going 5/8s, so I was very proud of how he ran.”

Moquett said he did not have a planned next race for Firecrow, but said he will be aiming for the Breeders’ Cup Turf Sprint at Del Mar in November, a race that will be contested at five furlongs.

“I firmly believe that with the right trip he’s as tough as anyone in the business at that distance,” Moquett said. “So we’re just going to try to work, try to allow him to earn his way to that direction.”

Man in the Can

After finishing second in both of last two races, both in stakes company, the Can the Man colt will drop down to allowance company for his next race.

“Hoping that we can we can find an allowance race to pick his head up and get him back in the winner’s circle,” Moquett said. “Put some money in the bank and then we’ll start looking for other things.”

The First Samurai gelding finished ninth in his race on Saturday, the Maryland Sprint Match Series Stakes (G3) at Pimlico. Moquett said that performance is not indicative of the 6-year-old’s talent level.

“Seven’s better than he ran the other day, he stumbled out of the break,” Moquett said. “If you’ve been watching the races up there, if you’re on the outside going around the turn, you’re running on a different surface than the horses on the inside were on.”

Moquett said Seven Nation Army’s next spot is yet to be determined.

You're to Blame finished fourth last time out in the Issac Murphy Marathon Overnight Stakes on April 27 at Churchill Downs.

“The horse that beat him is obviously that division leader,” Moquett said of Lone Rock, who has won his last two races against You’re to Blame. “I think there’s not enough of these marathon races where you can avoid someone, so you just have to go over there and hope that a situation works out in our favor.”

Moquett said he was still optimistic about the future for the 7-year-old son of Distorted Humor.

“He’s training well, he’s a happy horse,” Moquett said. “We just need some things to go our way so he can be the big daddy in those races.”