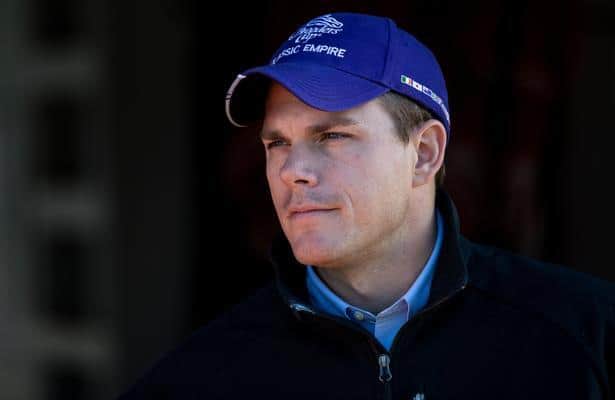 So far this year, Norm Casse has accumulated $455,861 in earnings, operating out of Churchill Downs. Casse, who struck out on his own in 2018 after working as an assistant for his father, Mark, has been winning at a 20 percent clip so far in 2021, with his starters finishing in the money more than 40 percent of the time.

Casse updated Horse Racing Nation on the status of his top stable talent.

The 3-year-old Tapizar colt, a Marylou Whitney Stables homebred, last ran in the Risen Star (G2) at Fair Grounds, getting bumped at the start and never getting his trip on the way to an 11th place finish.

He made his return to the track Saturday at Churchill Downs, going three furlongs in 37.2.

“He had some chips in his ankle that we had to remove, so that’s where he was,” Casse said. “He just had his first 3/8s back. Very, very excited about him, always have been, so hopefully he comes back bigger and stronger.

Casse will take horses to Saratoga this year, including the 4-year-old Mineshaft filly, an allowance winner in April at Churchill before finishing fifth in her most recent trip on June 5.

“Since we took the blinkers off and got her to relax a little bit more, she’s become a really nice allowance horse for us,” Casse said.

Other likely Saratoga runners for Casse include Puya Timing and Pretty Birdie, who is entered for her debut on Thursday at Churchill Downs.

“We’re going to have a really good Saratoga meet,” Casse said. “Kind of with limited starters, but kind of going to make a name for ourselves when we go.”

Casse spoke highly of the 3-year-old Super Saver filly, who has yet to break her maiden in three tries and has not raced this year. She finished second in her most recent race, in October at Churchill, losing at the wire to Kentucky Oaks starter Clairiere. She suffered a setback and has been out since, but Casse said he is excited for her impending return.

Super Quick last worked Saturday at Churchill, going four furlongs in 47.0, good for sixth out of 140 works at the distance.

“She’s been on the comeback trail all spring, and she’s getting ready to run on June 20,” Casse said. “We’re really excited about her.”

Glacial broke his maiden on first asking at Churchill on May 29, coming back from a slow start to win by 2 1/2 lengths in the 5 1/2-furlong race for 2-year-olds.

Casse said the Frosted colt is being pointed toward the Bashford Manor (G3) on June 26 at Churchill.

“We were really excited with the way that he ran,” Casse said. “He kind of got away bad, didn’t have an ideal trip for a first time-starter, especially a 2-year-old, and he still won with authority so we’re excited about him.”

In her first race, the 2-year-old filly won by 1 3/4 lengths in a five-furlong trip at Churchill on May 13. She is pointed toward the Debutante on June 26, also at Churchill.

“She ran a really impressive first time out race,” Casse said. “Came back and has worked really well since.”