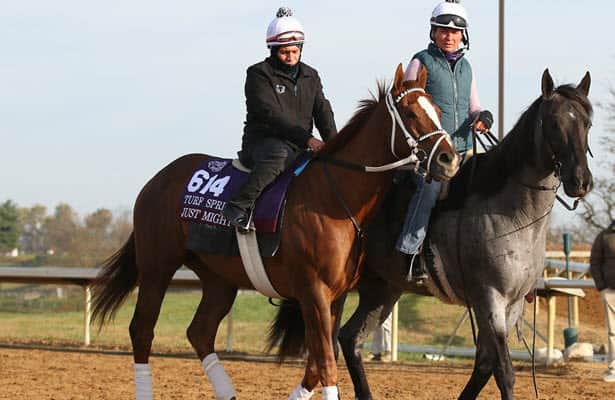 With Churchill Downs closing for the summer to replace its turf course, trainers will need to find other accommodations. For Michelle Lovell, an expert on the grass, the move will be to Colonial Downs, where her turf stars will have plenty of options.

“I’m taking them all,” Lovell said of how much of her barn will make the trip to the New Kent, Va., track. Opening day at Colonial Downs is July 19.

Lovell provided updates on some of her top horses for a Horse Racing Nation Barn Tour.

Just Might. The winner of the Mighty Beau in his most recent race at Churchill will be among those making the move to Colonial, where he will make his next start in stakes company in the $100,000 Da Hoss, going 5 1/2 furlongs on the turf.

“Depending on how he does there, there’s a couple of races up that way,” Lovell said. “Maybe at Parx, I think there’s something there for him, five (furlongs) on the turf, so we’ve got some options for him.”

Change of Control. The Fed Biz Mare has two stakes victories to her name already for 2021, including her most recent trip, the Intercontinental at Belmont Park on June 3. In that race, she managed to win by 1 1/2 lengths despite jockey Colby Hernandez losing his crop.

“She’s coming off two awesome wins,” Lovell said. “The owners want me to point her towards Woodbine, the Royal North.”

Sail on Ellen. One of Lovell’s top allowance runners, the 4-year-old daughter of American Pharoah broke her maiden in February at Fair Grounds. In her most recent race, she finished second at Churchill Downs on June 4, going 5 1/2 furlongs on the turf.

If possible, Sail On Ellen will be back in action on Saturday.

Maybe Later. One up-and-comer whose future Lovell expressed excitement about is Maybe Later, a 3-year-old daughter of Not This Time who finished second in her most recent race at Churchill. The filly lost that race, a $100,000 maiden special weight, to Look Me Over, who outclassed the field for an emphatic win.

Lovell was undeterred by the loss.

“I really like her,” Lovell said. “She’s going to develop into a really nice filly.”