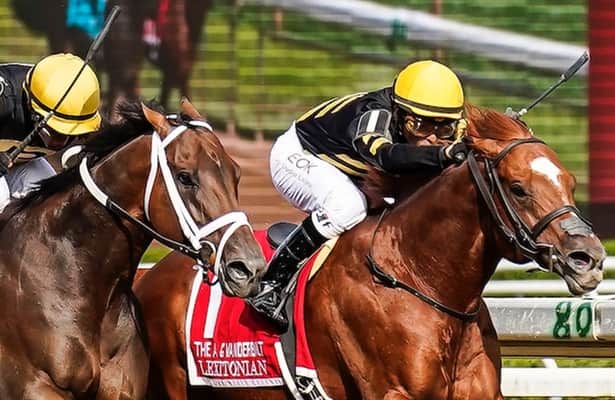 Photo: Dan Heary/Eclipse Sportswire
Check out Barn Tours on Horse Racing Nation
So far, 2021 has been a successful year for Jack Sisterson. In his fourth year on his own, training for Calumet Farm, has already has bested his previous highest-earning year, earning $1,804,534 through Oct. 5.

The trainer, who earned a Grade 1 win earlier this year with Lexitonian, updated Horse Racing Nation on top horses in his stable.

The winner from this year’s Vanderbilt (G1) at Saratoga will train straight to the Breeders’ Cup Sprint, according to Sisterson. In his most recent race, the Forego (G1) at Saratoga, he stumbled badly out of the gate and finished last in the field of six.

“These things happen in racing,” Sisterson said of the stumble. “He came out of the race in great shape, and we’re looking forward to the Breeders’ Cup Sprint with him.”

After a sixth-place effort in the Kentucky Turf Cup (G2) at Kentucky Downs, Channel Cat also will train up to the Breeders’ Cup, with Sisterson planning to send him in the Turf.

“Certainly a disappointing effort,” Sisterson said. “We didn’t really know what to take from that because he came out of the race in great shape and he’s trained forwardly out of it.”

The 3-year-old Tourist colt went the longest distance of his career, 1 1/2 miles in the Sept. 18 Jockey Club Derby on the lawn at Belmont Park, with blinkers off. He came into that race off of two strong showings going shorter distances at Arlington Park, with a runner-up effort in the Bruce D. (G1) and a win in the American Derby.

“We’re going to cut back in distance, put the blinkers back on and probably point to the Bourbon (G2) at Keeneland there at the end of the meet,” Sisterson said. “Then probably give him a freshening and shoot for the Tropical Park Derby with him at Gulfstream toward the end of December.”

After two consecutive allowance wins at Ellis Park in July and August, the 5-yaer-old son of Will Take Charge made his first stakes company start since 2018 in the Louisville Thoroughbred Society at Churchill Downs on Sept. 18. After he finished sixth and last in that race, Sisterson said, Derby Date will drop back down to allowance races.

“He didn’t really perform in that Louisville Thoroughbred Society race,” Sisterson said. “I want to drop him down, get him back to his winning ways.”

After winning two races in 2020, the 4-year-old Honor Code colt made his 2021 debut on Sept. 17 at Churchill Downs, finishing sixth in an allowance race. Despite that finish, Sisterson said the colt is doing well and he is optimistic for his next race.

“A lot to ask of a horse after a nine or 10-month layoff. We knew he wasn’t 100 percent, but he ran a very credible race,” Sisterson said. “It seemed to be a very speed-favoring track that day or week at Churchill, but he actually made up a lot of ground … just rightly so got tired.”

Sisterson said Twenty Twice most likely will run again at Keeneland on Oct. 23 in another allowance race.