Barn Tour: See how Sadler has more than Rock Your World 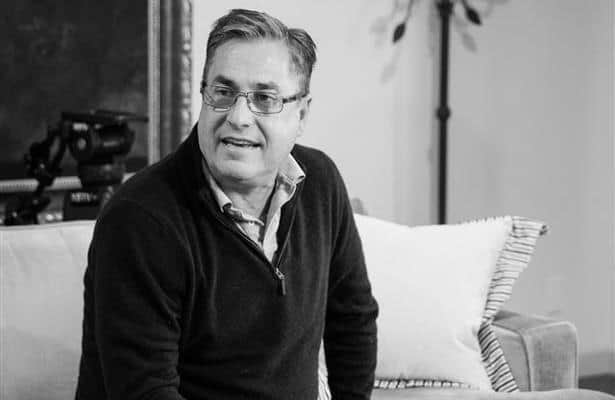 It is set up to be the Bob Baffert party for the 10th time. Or maybe even Mike Smith’s for the fourth year in a row.

Don’t mind, though, if trainer John Sadler tries to spoil their Santa Anita Derby (G1) celebration Saturday. Even with a horse that has never raced on dirt. An undefeated horse named Rock Your World.

“I think that he’s a horse that can run on both surfaces,” Sadler said at Santa Anita on Thursday for a Horse Racing Nation Barn Tour.

He has a roster that provides the promise of Rock Your World and the riddle of an unfamiliar 3-year-old who will also be in the Santa Anita Derby. There are also five older horses from his stable plus one familiar face that has moved on to another barn.

Rock Your World. Loyal connections are associated with this $650,000 Candy Ride colt. Lead owners and brothers Kosta and Pete Hronis have been with Sadler for 21 years that were highlighted by Accelerate’s championship season in 2018. In Rock Your World they have a horse that won his sprint debut on New Year’s Day and the $100,000 Pasadena Stakes going a mile Feb. 27. Now they make the big leap from the turf to a 1 1/8-mile win-and-you’re-in qualifier for the Kentucky Derby.

“We said we’ll start him on grass, and then when the time is right we’ll try him on dirt,” Sadler said. “He’s a big, stretchy colt. He should have no problems with a mile-and-an-eighth, a mile-and-a-quarter. After he won the Pasadena we said this is a natural progression.”

That was even before the defection of consensus Derby favorite Life Is Good because of an injury. It was not as if Sadler was waiting to put Rock Your World into the shallow end of the talent pool.

“You get a race like this, you always get a good field,” said Sadler, who won the 2010 Santa Anita Derby with Sidney’s Candy. “It was our plan all along to go into this race. With Life Is Good out, it just makes the field bigger.”

Umberto Rispoli will ride Rock Your World, the morning line’s 4-1 third choice from the field of 10.

Back Ring Luck. Sadler is still not sure what he has with this Malibu Moon gelding who was claimed for $62,500 out of a victorious 1 1/16-mile run March 5 at Oaklawn. “This is a private purchase for a new ownership group,” Sadler said, referring to a partnership led by the Clarke M. Cooper family trust. “They were looking for a 3-year-old that could run long,” Sadler said. He said he was still getting acquainted with Back Ring Luck. “He just got here Monday. I don’t really know that much about him other than that he shipped OK and looks pretty good. It’s like a lottery ticket.” Tyler Baze will ride Back Ring Luck, a 20-1 long shot.

Flagstaff. As the 8-5 favorite drawing the rail in Saturday’s seven-furlong Commonwealth Stakes (G3) at Keeneland, this 7-year-old Speightstown gelding and graded-stakes winner might break out of his version of “Groundhog Day.” Flagstaff’s last race was March 13 at Oaklawn, where he was third behind C Z Rocket and Whitmore. In three of his last four races Flagstaff lost to C Z Rocket. “Gosh, it was the same field as the Breeders’ Cup Sprint,” Sadler said. “They will go back in the Hot Springs sprint next week, so we thought we’d ship to Kentucky and go in the Commonwealth.” Flagstaff’s last win was nearly 13 months ago in the San Carlos Stakes (G2) at Santa Anita. “He’s a very honest horse with consistently good form,” said Sadler, who takes the blinkers off Flagstaff on Saturday. “We’ve got (Joel) Rosario on at Keeneland on Saturday, and we’re looking for a big race.”

Campaign. Twice victorious in Grade 3 races two years ago, the 6-year-old entire by Curlin will race in a stayers allowance next Friday on the dirt at Oaklawn. Since an 11-month break Campaign has finished sixth in a mile turf stakes at Santa Anita and fifth last month going 1 1/2 miles on Oaklawn’s main track. “He’s a long-distance specialist,” Sadler said. “It’s more about the distance than the surface. Long distance is his thing.”

Cistron. Still looking to rediscover the form that made him a Grade 1 winner in 2019, the 7-year-old entire by The Factor is being aimed for the Kona Gold (G3), a 6 1/2-furlong dirt race on April 18. Counting a loss in the San Simeon (G3) on March 13, it will be Cistron’s second race back from a 9 1/2-month break. “We brought him back off the layoff on grass,” Sadler said. “He was fourth, beaten two, and we’ll put him on the dirt for his next start. He’s a good, proven horse.”

Combatant. Winless in six starts since he finished first in last year’s Santa Anita Handicap (G1), this 6-year-old Scat Daddy ridgling is on a break since his one race this year, a fifth-place finish in a February allowance at Oaklawn. “Combatant is on the farm currently,” Sadler said. “He’s going to come back for a fall campaign.”

Chaos Theory. A Grade 3 winner last summer at Del Mar, he was claimed for $62,500 from a runner-up finish in a turf sprint at Santa Anita last month. The new owners led by David Bernsen sent the 6-year-old Curlin gelding to trainer Bob Hess.

Quick. Twice a winner in her native England and twice a winner in the U.S., the 5-year-old Olympic Glory mare had a setback since she won Jan. 17 in the 1 1/2-mile Astra Stakes (G3) on the Santa Anita turf. “She got a colic after her race, which was unfortunate,” Sadler said. “She spent a little time in the hospital. She’s on the farm currently and now recuperating. She’ll come back good, but it won’t be until the fall.”