Barn Tour: See Steve Asmussen’s plans for 18 of his horses 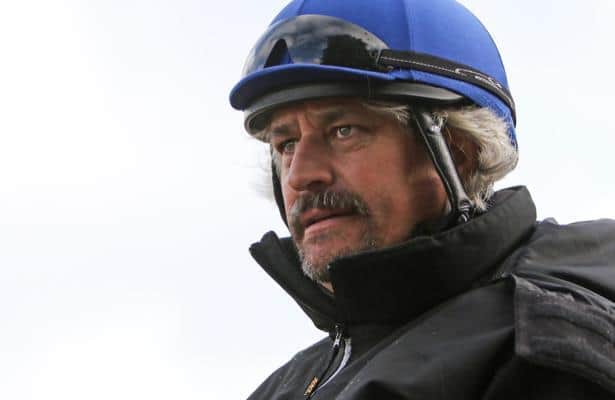 While Jackie’s Warrior might provide the best chance to bring him his first Kentucky Derby victory, Hall of Fame trainer Steve Asmussen might have an even better 3-year-old in his barn. Just not on the first Saturday in May.

“It’ll be the last Friday of April this year,” he said.

Asmussen was talking about Clairiere, the Stonestreet Stables homebred filly that closed from nearly 10 lengths off the pace to win this month’s Rachel Alexandra (G2) at the Fair Grounds. It also shortened her to 16-1 in overseas futures wagering on the Kentucky Oaks, which Asmussen has won twice.

“I would bet she would be lower odds than that on April 30,” said Asmussen, who took part in HRN’s Barn Tour series in a telephone conversation this week.

Not only did Asmussen discuss his 3-year-old males led by his top Kentucky Derby hopeful Jackie’s Warrior, he also provided an update on some of his better-known older horses.

The tour starts with his Oaks prospects.

Clairiere. Asmussen knows all about her sire Curlin, whom he trained to two Horse of the Year awards. The upper-crust bloodlines are also on the bottom side, since Clairiere is out of the Bernardini mare Cavorting. “Nothing but excitement there,” he said. “You have just as royally a bred, beautiful filly as can possibly be with the class and temperament you could only hope for. I’m just so impressed by what she has done with three races with every indicator she will be better with time and distance, just like her mama and her daddy.” With two wins and a second, Clairiere is being pointed next to the Fair Ground Oaks (G2) on March 20.

Joy’s Rocket. Mother Nature, specifically some historically bad winter weather in Arkansas, got the better of the plans for this Anthony’s Cross filly. “She missed training at Oaklawn,” said Asmussen, who was not sure when Joy’s Rocket’s next race would be. Three wins in minor stakes preceded her third-place finish in the one-mile Martha Washington at Oaklawn.

Thoughtfully. The Grade 2 winner by Tapit finished seventh in the Breeders’ Cup Juvenile Fillies but has not been idle since. “She has been out of training since the Breeders’ Cup,” Asmussen said, “and will make a summer return.”

Jackie’s Warrior. The beaten favorite in the Breeders’ Cup Juvenile tries to avenge his fourth-place finish to Essential Quality when they are rematched Saturday in the Southwest Stakes (G3) at Oaklawn Park.

Midnight Bourbon. The Lecomte (G3) winner that finished third in the Risen Star (G2) will stay on the New Orleans path to the Kentucky Derby. “I’m pleased with both of his races at the Fair Grounds,” Asmussen said. “I think everything went his way, and he had success in the Lecomte. A little more was thrown at him in the Risen Star. I expect him to respond positively to it and run back better in the Louisiana Derby (G2, March 20).” Asmussen also believes Risen Star winner Mandaloun and the two races’ runner-up Proxy will mix it up again with Midnight Bourbon. “I would expect so, and I think all three of them are very worthy 3-year-olds and the (1 3/16-mile) trip will separate them.”

Cowan. Asmussen said a poor start was critical in the Kantharos colt’s second-place finish by three-quarters of a length to Japanese shipper Pink Kamehameha last weekend in the Saudi Derby. “A versatile horse, he’s given us some nice thrills with his runner-up finish in the Breeders’ Cup and now the Saudi Derby,” he said. “But it’s frustrating at the same time when you feel that things could have gone different and he possibly could have won one of them.” Asmussen sent Cowan to Dubai, where the March 27 UAE Derby (G2) is a possibility – and perhaps a way to get the Kentucky Derby.

Super Stock. A black-type stakes winner last summer at Lone Star Park, the Dialed In colt was third in the Iroquois (G3), third in the Breeders’ Futurity (G1) and second in the Street Sense. He is expected back from his four-month break for the March 13 running of the Rebel (G2) at Oaklawn Park.

Saffa’s Day. A last-out winner of a two-turn mile for maidens at Oaklawn Park, he joins stablemate Jackie’s Warrior in Saturday’s Southwest Stakes.

Cazadero. A Grade 3 winner last summer, the Street Sense colt has not raced since he finished fifth in the Saratoga Special (G2). Back on the work tab regularly since mid-November, Asmussen is still weighing his options. “I have not circled his start date back,” he said. “He is nearing a return.”

Finite. A three-time graded-stakes winner that finished fourth in the La Brea (G1) at Santa Anita, the Munnings filly has a tall order in her 4-year-old debut Sunday. She tries to upset two-time Eclipse Award winner Monomoy Girl in the Bayakoa Stakes (G3) at Oaklawn Park.

Silver Prospector. With four wins including two graded stakes in 13 starts, the 4-year-old colt by Declaration of War tries this weekend to improve on his fifth-place finish last month in the Louisiana Stakes (G3). He is entered in the Razorback Handicap (G3) at Oaklawn Park.

Yaupon. After finishing eighth as the previously undefeated favorite in the Breeders’ Cup Sprint, next month’s six-furlong Dubai Golden Shaheen (G1) will mark Yaupon’s first race as a 4-year-old – and his second chance to get his first open-company stakes victory.

Max Player. An 11th-place finish in last weekend’s Saudi Cup marked the first race for Max Player since he finished fifth last October in the Preakness. “He’s coming back stateside,” Asmussen said. “We’ll let him get over the trip before deciding.”

Nucky. A Grade 1 winner as a 2-year-old colt for Peter Miller in the summer of 2019, he has not finished better than fifth in his six starts since. That included a ninth-place finish in a turf allowance last month at the Fair Grounds in his first race for Asmussen. Nucky had been on a long break after being claimed for $80,000 by Gary Hartunian’s Rockingham Ranch last spring. “He is now a gelding,” he said of the 4-year-old by Ghostzapper. “That’s a recent development. We’ll see how he trains as a new man, so to speak.”

Tenfold. Now 6, this is the Curlin horse that famously finished a hard-charging third in the foggy 2018 Preakness, getting within three-quarters of a length of Justify at the wire. Since winning the 2019 Pimlico Special (G3) on the same track, he has but two third-place results to show for his last 13 starts. They included a fourth-place finishes last month in the 1 1/2-mile John B. Connally Turf Cup (G3) at Sam Houston. After two tries on turf, Asmussen puts him back on dirt to race March 13 in the second running of the 1 1/2-mile Temperence Hill, a $150,000 black-type stakes at Oaklawn.

Henley’s Joy. This durable 5-year-old grass horse is on a 10-race streak of off-the-board finishes since he won the 2019 Belmont Derby Invitational (G1). He will try to reverse the trend in a one-mile allowance race March 4 at Sam Houston, where he finished eighth last month in the Connally Cup.

Rotation. A one-mile allowance win two starts ago at Sam Houston came after an 0-for-5 year in 2020. After a fifth-place finish over that same course and distance Jan. 30, this 5-year-old horse by Tapit switches to the turf and joins Henley’s Joy in that one-mile allowance March 4.

Engage. With two graded-stakes wins and three other victories in 16 starts, this 6-year-old sprinter by Into Mischief is being pointed to the six-furlong running of the Hot Springs, a listed stakes March 13 at Oaklawn Park.

Knowing that racing fans would love to know who his next standout will be, Asmussen made like a savvy poker player.

“We’re blessed with opportunity,” he said. “I feel that the weather interruptions definitely got in the way of some very impressive maidens that we’re going to regroup and point again. We have that to look forward to. I will keep the names to ourselves so that the surprise is sweeter.”

And to make the payoff is bigger for a few knowing bettors? Even over the phone, one could see Asmussen’s poker face when he said, “Something like that.”