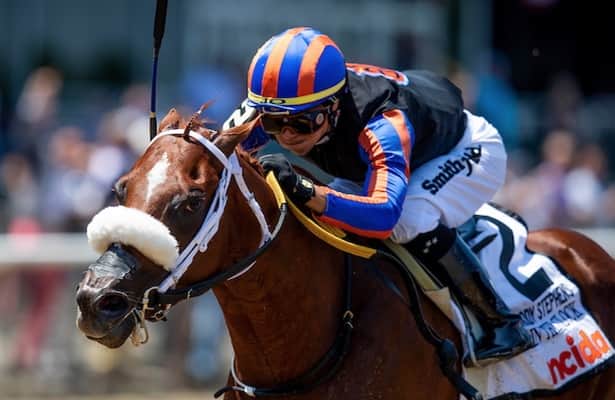 Despite not having a starter in the Kentucky Derby or the Breeders’ Cup, Saffie Joseph Jr. has had quite a good year.

He won two Grade 1 stakes – the Carter with now-retired Mischevious Alex and the Woody Stephens with Drain the Clock. His $7.8 million in earnings is his most ever. And he has quite a string of 2-year olds.

Joseph provided an update on his stable Monday for the latest in Horse Racing Nation's Barn Tour series.

Drain the Clock. Last seen finishing fourth in the H. Allen Jerkens (G1), the 3-year-old by Maclean’s Music resumed working last month at Gulfstream. His last posted work was four furlongs in 48.03 seconds on Oct. 17. The winner of the Woody Stephens (G1) in June “is probably going to run back in December at Gulfstream,” Joseph said.

Ny Traffic. The eighth-place finisher in last year’s Kentucky Derby won the black-type Hudson Handicap by 8 3/4 lengths last out. “He's going to run in the Cigar Mile. He worked this morning (four furlongs in 49.22 at Gulfstream), and he's going to have one more work next week and he runs in the Cigar Mile.”

Shifty She. The 5-year-old mare got her first graded-stakes win last month in the Nobel Damsel (G3) at Belmont, her third win from six starts this year. “She's probably going to go straight to the Pegasus Turf (G1), or she may prep in December. We haven't decided yet. I'll have to talk it over with the owner a little bit more before we decide.”

Queen Nekia. The 6-year-old mare’s last win came in the Royal Delta (G3) in February, and she has finished third or fourth in five starts since – including a Gulfstream handicap on Sunday. “She ran fourth. … I think she was a little too close to everyone. She'll probably run next month again if there's a nice graded stakes for her, and then she's going to go to stud next year. They have a booking to Gun Runner.”

White Abarrio. This colt by race day broke his maiden with a 6 3/4-length in September and then won a Gulfstream allowance by 4 lengths. “He's one that the owners purchased after he won first time out. He ran for us going a mile in an allowance, he won quite well. working extremely well this morning. He's going go to the Jockey Club at Churchill on Saturday.”

A. P.’s Secret. This Cupid colt graduated on debut Nov. 6 with a four-length win in a seven-furlong race. “He's a horse that always showed a lot of class, and every breeze he's had, he's worked exceptional. ... I think he needs a lot further than seven eighths, but it was just a good race to get him started in. He's going run in an allowance at Gulfstream in December.”

Of a Revolution. The Maclean’s Music colt broke his maiden in May and then returned on Nov. 13 to win an allowance at Gulfstream. “He's 2-for-2 and he actually won quite a competitive allowance race last time, beating a horse (Summery) that was an impressive maiden special winner. He is probably going to go the same road as Drain the Clock. There's a stake in January that he'll come back in his 3-year-old year.” Joseph said Of a Revolution was given a break after becoming sick. “Then he just wasn't right, so we backed off of him and started him back up. He came back off the layoff, beating a very good bunch. The race didn't come back fast on figures but before the race, it was supposed to be a very good bunch. He missed the break and was still able to overcome that, so I think he's a horse that we hold in high regard. We actually nicknamed him Drain the Clock Jr. They're by the same stud, and he's chestnut.”

Make it Big. He is another 2-for-2 colt, this one by Neolithic. “He won a Florida-bred first time, and he won a stake. He's going to go to Remington Park, the Springboard Mile. Stretch him out and try him against open company and see how he fits there.”

Skippylongstocking. This Exaggerator colt is 4: 1-1-0 this year, last finishing fourth in the listed Street Sense Stakes on Halloween. “Skippy broke his maiden quite well and then he ran at Churchill. I think he was a little disappointed, but he did act up in the gate. ... We're going to regroup with him, we'll probably start him back up in an allowance at Gulfstream in two weeks.”

Avant Glory. The Khozan colt won by a head in his September debut. “He won first time in a Florida-bred race. There is an opening-day race (at Gulfstream) that he's possible to run in if it goes, a nice Florida-bred allowance. He still has a long way to go to get the stakes, but I thought he was gutsy in his debut.”