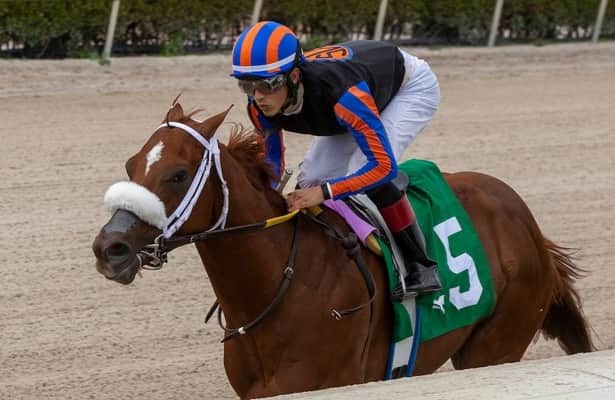 Saffie Joseph Jr., the up-and-coming trainer who had his first Kentucky Derby starter last year with Ny Traffic, has a handful of hopefuls for the Run for the Roses this year.

In a Barn Tour interview from Gulfstream Park with Horse Racing Nation, Joseph provided an update his best-known horses — Ny Traffic and Math Wizard — as well as those Derby contenders and others in his stable.

Ny Traffic — After runner-up efforts in the Louisiana Derby (G1), Matt Winn (G3) and Haskell (G1), Ny Traffic finished eighth in the Kentucky Derby and ninth in the Preakness before taking a break.

“We freshened him up,” Joseph said. “He’s back training steadily. I would say he’s probably two works away from running. Most likely get him back in an allowance here at Gulfstream first and then see how that goes and then after that go somewhere else.”

Math Wizard — Winless since his score in the 2019 Pennsylvania Derby (G1), the now 5-year-old finished ninth in the Pegasus World Cup (G1) last out.

The son of Algorithms is “kind of an overachiever,” Joseph said. “Each time he runs, it’s a tough race. On paper he has a form that doesn’t look good. We’re going to probably step back a bit with him and maybe run him next time in either allowance or a minor stakes, and we’re going to give him some class relief. He’s run some good races, but he’s run against some good horses. Next time we’re going to give him some easing class, try to get his confidence back.”

Drain the Clock — A son of Maclean’s Music, he has won 4 of 5 starts, including the Swale Stakes (G3) at Gulfstream on Jan. 30. His lone loss came when he did not finish the Jean Laffite Stakes on Nov. 30 at Delta Downs. He was ridden by Heriberto Figueroa, and the Equibase chart said he was “up close early from the outside, broke an iron up the backstretch, lost rider and walked off.”

Joseph has a different version of what happened: “The rider said that his boot ripped on the sole, and he lost his balance and fell off.”

Ahead of the Swale, “we weren’t really considering stretching him out any further just because we’re trying not to get any Derby fever,” Joseph said. “But the way he won, after talking to all the owners, we’re going to give him a chance either in the Fountain of Youth or the Gotham.”

“He’s been very impressive,” Joseph said. “I mean he has one flaw on his resume. So he’s a good horse.”

Collaborate — This Into Mischief colt was the 7-5 favorite in his Feb. 6 debut at Gulfstream. He finished fifth, but he made up 4 3/4 lengths in the last quarter-mile of a six-furlong race in the slop.

“He’s a horse that trained really well into the first race,” Joseph said. “We have high expectations. I know he got beat, but I don’t think we have lost any faith with him. He’s a really, really good horse.”

Next up for the Three Chimneys Farm homebred, also owned by eFive Racing Thoroughbreds, likely will be a one-mile maiden race on Fountain of Youth day Feb. 27 at Gulfstream.

“I think has a really bright future,” Joseph said. “Obviously, he hasn’t won yet, so it’s hard to kind of rank him up there.”

Super Strong — A Kentucky-bred son of Super Saver, he won his only race, the Classico Agustin Mercado Revron (G1) at Camarero in Puerto Rico. He is owned by Sonata Stable, which also owns another of Joseph’s 3-year-olds, Moonlite Strike.

After the win the owners began to “think he’s a really good horse,” Joseph said. “So they sent him back over to us, and he’s probably going to run in the Gotham I would think.”

Joseph added, “It was hard to judge his form in Puerto Rico,” but he said Super Strong “had a good work last week” — five furlongs in a bullet 59.6 seconds Feb. 13 at Palm Meadows.

Moonlite Strike — The Liam’s Map colt broke his maiden on his second try in November and then scored in an allowance race at Gulfstream before a fourth-place finish in the Smarty Jones at Oaklawn last out.

Joseph said Moonlite Strike did not ship well to Oaklawn. “He got colicky on arrival, just a little gassy for the first two days, and I thought he didn’t run as fast. Whether he’s just not in that class or the trip took a toll on him, it’s hard to say, but we’re going to give him one more chance. Probably going to run in the Fountain of Youth.”

Joseph said Moonlite Strike “has some turf pedigree. He may end up becoming better on the turf eventually.”

Mischevious Alex — The winner of last year’s Gotham (G3) and Swale (G3) won the Gulfstream Park Sprint (G3) on Feb. 13 for his second straight score after switching from John Servis.

“The first concern for us is is he going to have some more?” Joseph said. “His target is probably the Carter. The Dubai Golden Shaheen sprint is also on the table of options. So we’re going kind of play it by ear for the next few weeks before we decide.”

Tonalist’s Shape — The 4-year-old filly won the Forward Gal (G3), the Davona Dale (G2) and the Hollywood Wildcat last year but has not raced or worked since a fifth-place finish in the Raven Run Stakes (G2) on Oct. 17. She was due to return to Joseph on Tuesday after a freshening.

“She’ll make her comeback here in an allowance and, after that, try to get her back with a stakes, hopefully a graded stakes.”

“They’ve been training together basically in most of their breezes, and they’re in good form,” Joseph said. “I think they’re going to run their race. Whether they’re good enough, I will find out.”