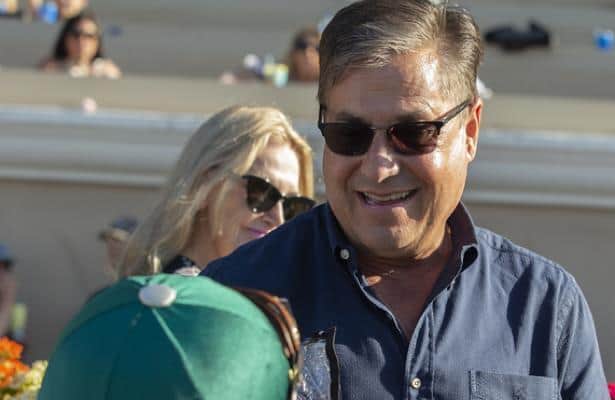 John Sadler has not only the world’s best racehorse, Flightline, bedded down at his Santa Anita barn, but potentially three other Breeders’ Cup starters.

Flightline is ticketed straight to the Nov. 5 Breeders’ Cup Classic after his smashing 19 1/4-length win in the Pacific Classic (G1) at Del Mar on Sept. 3. The undefeated Tapit colt has been galloping at Santa Anita and is scheduled to breeze on Saturday.

Trim your tickets with the Horses to Single Report

“The big guy’s doing good,” Sadler said Wednesday at Santa Anita. “He’ll work an easy half mile, and that will be the start of his weekly works going into the Breeders’ Cup.”

Also headed to the Breeders’ Cup for Sadler are Edgeway and the France-bred Bran. Edgeway most recently won the Rancho Bernardo (G3) at Del Mar for the second straight year in a gate-to-wire battle. She’ll look to do one better in the Breeders’ Cup Filly and Mare Sprint at Keeneland after finishing second last year at Del Mar to Ce Ce.

Bran punched his ticket to the Breeders’ Cup Turf Sprint when shipping to Kentucky Downs and taking down the $1 million Turf Sprint Stakes (G2) at 11-1.

Below is further insight on Sadler’s Breeders’ Cup prospects, plus an update on German 1,000 Guineas winner Txope, who never factored in the Del Mar Oaks (G1) in her U.S. bow.

Flightline. He would presumably have six works between now and the Breeders’ Cup. Whether those all are at Santa Anita remains to be determined. Sadler did not rule out shipping Flightline to Keeneland early so he could get a work over the Keeneland strip ahead of the Classic.

“I haven’t decided that yet,” Sadler said. “We’ll see how everything goes and we’ll look at the weather and the different things, but as of now everything is open.”

Flightline has won all five career starts by a combined 62 3/4 lengths, including three Grade 1 races. This month he was designated the world’s best racehorse by the International Federation of Horseracing Authorities. In the Breeders’ Cup Classic futures odds set by Costa Rica-based Bovada, Flightline is a heavy 1-2 favorite.

Sadler’s only Breeders’ Cup win came in the Classic in 2018 with Accelerate at Churchill Downs.

Bran. The 4-year-old gelding by Muharaar arrived in the U.S. during the winter and has had a relatively busy campaign, with eight starts beginning Jan. 1. The Breeders’ Cup also will be Bran’s third trip to Kentucky this year. Before his win this month at Kentucky Downs, he traveled to Churchill Downs for the 5 1/2-furlong Turf Sprint Stakes (G2) on the May 6 Kentucky Oaks undercard. He rallied to be second by less than a length to Arrest Me Red.

In the Kentucky Downs Turf Sprint going six furlongs, Bran’s rally was rewarded with a neck victory under Vincent Cheminaud. Arrest Me Red was third.

“He finally ran a big number. He ran a six on the Ragozin Sheets, which is a heavy, heavy number. And he’s continued to thrive,” Sadler said.

When it comes to the Breeders’ Cup Turf Sprint, Sadler does have concerns about the 5 1/2-furlong distance.

“That could be a little short,” he said.

Edgeway. The Rancho Bernardo was the third win in four starts this year for the 5-year-old mare by Competitive Edge. She also won the Kalookan Queen and Las Flores (G3) at Santa Anita this winter before a sixth-place finish in the Derby City Distaff (G1) on the Kentucky Derby undercard.

“We’ll do the same thing as we did last year and train up to the Breeders’ Cup,” Sadler said.

In the 6 1/2-furlong Rancho Bernardo, Edgeway dueled through fractions of 44.85 seconds and 1:09.24 before finally edging clear of her stubborn foe to win by a half length.

“We were very happy with her race at Del Mar. It was a battle and she battled on,” Sadler said. “She ran a good race.”

Tripoli. The Grade 1 winner could be Sadler’s fourth Breeders’ Cup starter. He is on track to run in next weekend’s Awesome Again (G1) at Santa Anita, which is a “win and you’re in” qualifier for the Breeders’ Cup Classic.

Last year, Tripoli won the Pacific Classic (G1), was fourth in the Awesome Again (G1) and then checked in seventh in the Breeders’ Cup Classic. The 5-year-old horse by Kitten’s Joy has made only two starts this year. He was fourth in the American (G3) at Santa Anita in June then was off the board in the San Diego Handicap (G2) at Del Mar.

Tripoli was entered for the Sept. 3 Del Mar Handicap (G2) on turf but was scratched. He has since had a pair of bullet works: five furlongs in 58.0 seconds at Del Mar on Sept. 11 and another five-furlong drill in 1:00.60 on Sunday at Santa Anita, which was the fastest of 36 moves at the distance.

Heywoods Beach. Winner of the Cougar II (G3) at Del Mar in July, he could be joining his stablemates at Keeneland for Breeders' Cup weekend. Heywoods Beach is set to go in the 1 1/2-mile Tokyo City Cup (G3) at Santa Anita a week from Saturday. A good effort there and he'll ship to Kentucky for the 1 5/8-mile Thoroughbred Aftercare Alliance Stakes (G2) on the Breeders' Cup Friday undercard, Sadler said.

Heywoods Beach, a 5-year-old horse by Speightstown, most recently finished off the board in the Del Mar Handicap when trying grass.

Txope. The aforementioned German 1,000 Guineas was her third and final win in Europe before arriving in Sadler’s barn this summer. It turned out to be a short stay in the U.S. for the 3-year-old daughter of Siyouni.

Txope tried the Aug. 20 Del Mar Oaks (G1) for her U.S. debut and finished 10th of 13 while never a factor. Sadler said she has returned to Europe to be bred to Frankel, one of the world’s top stallions.