Barn Tour: Rob Atras on his new G1 winner, others in his barn 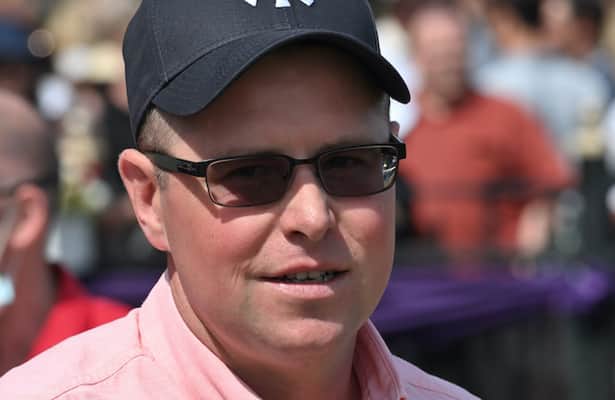 The Honor Code filly had not won since breaking her maiden in February. In her previous start, she finished seventh in the Kentucky Oaks (won by Malathaat).

Driving between Belmont and Saratoga on Tuesday, Atras told Horse Racing Nation that it was a "thrill" to even compete against Malathaat and Clairiere – "two very accomplished fillies." But to win, well, "was something else. It was very thrilling."

And it could be the start of a rivalry with Todd Pletcher's Malathaat, as they could meet again in the Alabama (G1).

"That's what we're pointing towards right now. And it sounds like they are too. So I'm all for it. And the outcome might be different. But as long as our filly does well the next couple weeks and runs in the race and shows up, I'm sure she'll make a good race of it again."

The CCA Oaks was the first Grade 1 victory for Atras and an important accomplishment for an up-and-coming trainer. Based at Belmont, he struck out on his own in 2019 after working as an assistant for Robertino Diodoro for four years – though he also had trained on his own a bit before that.

For now, Atras said, "we had a good, good winter, where we won a few stakes races. (More on that later.) We've kind of got a balanced stable, we've got some allowance horses, we've got a couple stakes horses, and then we've got some 2-year-olds, but there's still a little ways away, so I can't really talk about them right now."

Atras' other graded stakes wins also came this year, one with Chateau in the Tom Fool (G3) in March. Since then, the 6-year-old gelding finished fourth in the Carter (G1), second in the Runhappy (G3) and third in the black-type Light the Fuse stakes.

"We've kind of had a little bit of trouble spotting him since those races," Atras said. "We took a shot against some of those Breeders' Cup-type horses, and he may just be a notch below them. So, we still haven't really decided where we're going to run him next."

He also won the Toboggan Stakes (G3) with American Power in January. That was the third of four straight wins in New York, followed by a second-place allowance-race finish. Then, in his last two starts, the 6-year-old was third in the True North (G2) and sixth in the John A. Nerud (G2).

"He got really good at Aqueduct. We stretched him out a little bit, seven eighths and a mile. And he rattled off I think four wins in a row for us. And then his last race was a little bit disappointing. So he's another horse that we're just not exactly sure where we're going to spot him yet. But he's probably a notch below those Grade 1, Grade 2-type horses."

Atras entered Sadie Lady, a 5-year-old mare, in Wednesday's Honorable Miss, but scratched her from that Wednesday morning and said he would enter her in the Union Avenue Handicap for New York-breds.

Atras has about 50 horses in his barn, split for now between Saratoga and Belmont.

In recruiting new horses, he said, he looks at sales as well as claiming races. "Over the last year, I've definitely looked at more quality than quantity. That's been that's been our goal. And, you know, we do claim still and we've definitely we get some 2-year-olds in now, which is nice."