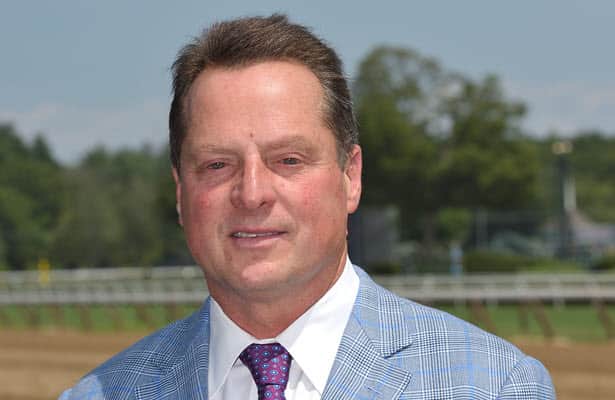 Fair Grounds will be the focus of the horse racing world this weekend with the Risen Star (G2) and Rachel Alexandra (G2) being virtual win-and-you're-in races for the Kentucky Derby and Oaks.

Tom Amoss figures prominently in both races, with three entries in the Rachel Alexandra and two in the Risen Star.

“None of my horses in the Rachel Alexandra or the Risen Star are going to win this race on their own accord from what they’ve accomplished in the past,” Amoss said Monday in an HRN virtual Barn Tour. “Each one of those horses is going to have to be better than what they were last time, but that’s what young horses do. They progress.”

Amoss offered an update on all five 3-year-olds, along with perspective into what kind of improvement he wants from each of his weekend entries and the latest on retired 2019 Kentucky Oaks winner Serengeti Empress.

The Union Rags colt is set to make both his stakes debut and first trip at 1 1/8 miles in Saturday’s Kentucky Derby prep. He won his last race going one mile at Aqueduct to break his maiden on first asking Jan. 8.

Amoss praised the colt, who will also be making his first trip for Amoss after previously being trained by Chad Brown.

“He’s a quality horse that comes into the race off a quality performance up in New York,” Amoss said. “He’s got to press.”

If Defeater, another son of Union Rags, runs in the Risen Star, it will represent a major step up in distance for the colt, who ran six furlongs in his lone appearance, a maiden victory at Fair Grounds on Jan. 2.

However, the colt is cross-entered in a 1 1/16-mile allowance race at Fair Grounds on Saturday.

“That's really throwing a horse in the deep end of the pool, and that’s not a move I would typically make,” Amoss said. “So in looking over Saturday’s card, although no decision has been made, the ownership group must have a good conversation about it on Thursday.”

The daughter of Ghostzapper carries a stakes win into the race from the Dec. 1 My Trusty Cat at Delta Downs. She since has a fifth-place finish in her 3-year-old bow, the Silverbulletday at Fair Grounds on Jan. 12.

“You’ve got to just say that the race is an anomaly,” Amoss said of her most recent trip. “She’s trained well. She’s coming back this weekend, we’ll certainly be looking to ride her in a more patient fashion and try and finish up on the end of the race.”

Amoss said he thought the filly was doing well before her last trip.

“She won very, very easily,” Amoss said of her race at Delta Downs. “Certainly coming back in her next start at Fair Grounds was disappointing. It’s really unusual.”

Zoom Up will make her stakes debut in the Rachel Alexandra, but she has earned victories in her last two races, both at the Fair Grounds.

“She’s won a couple races back to back,” Amoss said. “She’s proven that she can cover a lot of ground in her last start (one mile and 70 yards), and she ran quickly.”

The Rachel Alexandra is certainly a step up in competition for the daughter of Upstart, but Amoss thinks she is up for the challenge.

“A horse that’s very deserving of a chance in this race based on all that,” Amoss said. “She’s one that knows where to tactfully place herself. I would say she’s a little bit more versatile.”

Another filly making her stakes debut in the race, Off We Go finished second in a 5 1/2-furlong allowance race at the Fair Grounds in her last race. Amoss said he considers her the “wild card” of the Rachel Alexandra.

“She’s quick,” Amoss said. “I would say she is probably more likely to be a pacesetter in this race than either of the other two, and she’ll be making the transition from one to two turns, so we’ll see how far she carries it.”

A multiple Grade 1 winner, including in the 2019 Kentucky Oaks, Serengeti Empress was retired after a second-place finish in the Breeders’ Cup Filly & Mare Sprint on Nov. 7. Amoss said the 5-year-old, who will be bred to Into Mischief, is enjoying her retirement at Taylor Made Farm in Nicholasville, Ky.

“She loves it out there,” Amoss said. “Plays around in the snow, well taken care of. Taylor Made has done just a wonderful job of not only caring for her but of keeping us up to speed on her through Twitter (@SerengetiEmp1), so she’s doing great.”