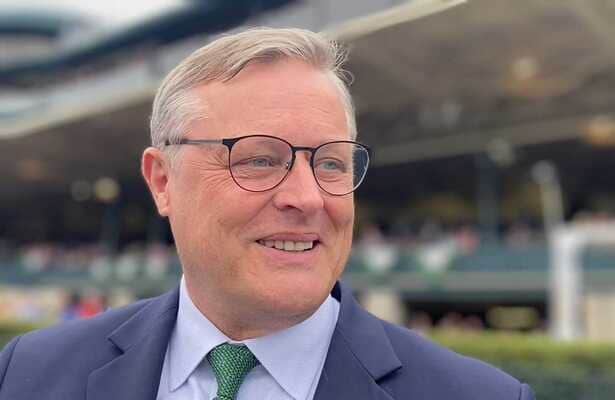 Presuming he fares well in Saturday’s highly competitive renewal of the Grade 2 Stephen Foster Stakes at Churchill Downs, Mandaloun has an ambitious summer planned for him.

But what else is new for a Grade 1 winner from Juddmonte Farms?

“If our next stepping stone is to the Whitney (G1) with the field that’s building for that race, we better get a good race here,” Juddmonte manager Garrett O’Rourke told Horse Racing Nation on Monday.

That race Aug. 6 at Saratoga figures to include Life Is Good and Hot Rod Charlie, two more horses whom Mandaloun may expect to see yet again Nov. 5 in the Breeders’ Cup Classic.

The championships this fall at Keeneland might provide a showcase for more than a few Juddmonte horses – many, like Mandaloun, in the care of trainer Brad Cox. Others will be brought in by trainers such as Bill Mott and, yes, Bob Baffert. They all will carry the pink and green colors of Juddmonte, which is out to build on its seven previous Breeders’ Cup victories.

Usually done with a trainer, this Horse Racing Nation Barn Tour was provided by O’Rourke, who looks after the U.S. arm of Juddmonte while headquartered at a pair of farms covering four square miles south of Lexington, Ky.

Six Juddmonte homebreds were the focus of this tour.

Mandaloun. Coming off a ninth-place finish in the $20 million Saudi Cup (G1) in February, the 2021 Kentucky Derby winner will face a salty field Saturday. Olympiad, who has won his last four starts, including the Alysheba (G2) on the Kentucky Oaks undercard, and Americanrevolution, the winner of the 2021 Cigar Mile Handicap (G1), are the foremost rivals.

“Olympiad is absolutely at the top of his game at the moment,” O’Rourke said. “It’s a field that runs deep.”

After getting two months of rest following the Saudi Cup, Mandaloun has been a reliable worker. The 4-year-old Into Mischief colt has had eight breezes in as many weeks at Churchill Downs, most recently going five furlongs in 1:00.8 on Saturday.

“I saw him on Saturday,” O’Rourke said. “Brad says he’s working very well. We just hope we can put (the Saudi Cup) into a distant memory and just move forward.”

More of what O’Rourke said about Mandaloun may be heard Friday on the Ron Flatter Racing Pod from HRN.

Fulsome. Another 4-year-old Into Mischief colt who was bred by Juddmonte, Fulsome usually works for Cox in company with Mandaloun. But Saturday, he was entered in a $150,000 allowance race that he wound up winning at Churchill Downs. “Brad actually had intended originally going to the Cornhusker Handicap (G3, July 9 at Prairie Meadows),” O’Rourke said. “Then he realized he was eligible for this allowance. It’s a good thing for us when you start offering $150,000 allowance races. You go for the low-hanging fruit.” O’Rourke said the three-time Grade 3 winner might land eventually in a Grade 2 race Aug. 26 in West Virginia. “We had discussed maybe going to the Charles Town Classic, which is a $1 million race,” he said. “I think at this level, he’s a very, very productive horse. We’ll keep fishing around without having an immediate goal for him in the next month, but I think that’s the main summer goal.”

Obligatory. Trained by Mott, the 4-year-old Curlin filly who won the Derby City Distaff (G1) came up a half-length short against Bella Sofia in the June 10 running of the Bed o’ Roses (G2) at Belmont Park. Those races were seven furlongs, which O’Rourke sees as a good fit for the four-time graded-stakes winner. “Bill had discussed going two turns with her again, which she did effectively in the Cotillion (G1, finishing second) last year,” he said. “But she was beaten by Clairière there. All the worthwhile races to aim for at two turns, she’s going to meet the likes of Clairière and Malathaat. It’s a deep division this year, and I think we’d be a lower price in seven-furlong, Grade 1 races. We wouldn’t be taking on the likes of those.” O’Rourke said the Ballerina (G1) at seven furlongs Aug. 28 at Saratoga would fill the bill for Obligatory. “We’re leaning toward taking it easy with her for a month. ... We might just freshen her up and bring her straight to the Ballerina.”

Masen. The 4-year-old Kingman gelding who was bred in England went 6: 3-1-1 in Ireland for trainer Ger Lyons before Juddmonte shipped him across the pond to race in stakes company for Chad Brown. Masen has not missed a beat since, coming within a nose in the Maker’s Mark Mile (G1) of being perfect in three American starts, all at a mile on the turf. In his last start June 18, Masen tugged at jockey Flavien Prat’s tight, early rein but still won the Poker (G3) at Belmont. The next stop is the Fourstardave Handicap (G1) on Aug. 13 at Saratoga on the way to a potential start in the Breeders’ Cup Mile. “He’s relatively fresh from the time off as an early 3-year-old,” O’Rourke said, referring to Masen’s 11-month recovery from an injury as a 2-year-old. “Being a gelding, we’d keep our options open and hope to have him racing for us over here for quite some time. If he can do that, we’ll keep on aiming toward those Grade 1 races. The best scenario is he gets to the top level in the miler division.” O’Rourke said that would especially flatter Kingman, whom Juddmonte would like to see covering more mares in the U.S.

Set Piece. Before Churchill Downs called off weekend racing on its tattered turf course, the 6-year-old Dansili gelding was going to try to win for the second year in a row Saturday in the 1 1/16-mile Wise Dan (G2). Now that race has been called off. “We ran some horses on that turf course (in early June) the last time they ran, and they just didn’t run their race,” O’Rourke said. “We were none the wiser coming out of it.” Now the next race for Set Piece is up in the air. Last time out he won the Dinner Party (G2) on the Preakness undercard May 21 at Pimlico. Being a deep closer, he is subject to the whims of an early pace – and track biases. “Sometimes you come across a turf course that is speed favoring, and that won’t help him,” O’Rourke said. “But then you come home, you regroup, you come back out, and he shows up at his best again next time.”

Laurel River. When asked about Baffert’s return this weekend from a 90-day suspension, O’Rourke quickly mentioned this 4-year-old Into Mischief colt who has not raced since an allowance victory last September at Del Mar. “I think he’s ready to come back,” O’Rourke said. “I haven’t spoken to Bob in a while, obviously, but he’s a horse that’s run very well at Del Mar last year. He should be back to the races in the next month.”