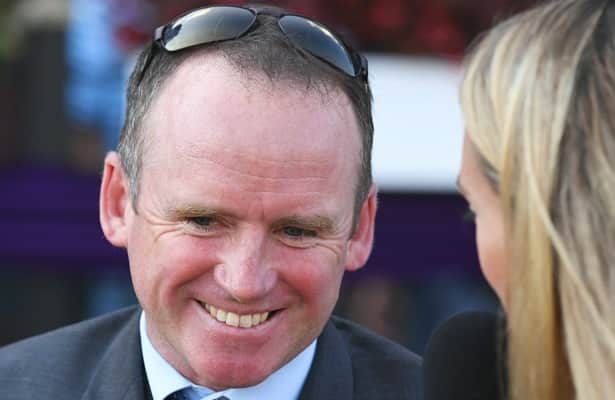 The first one is easy. His 5-for-5 colt Maxfield continues his comeback from two disruptive injuries Saturday when he will be favored to win the Santa Anita Handicap.

“There’s not a lot of Grade 1s for older horses in the country,” Walsh said Thursday at Santa Anita’s Clocker’s Corner. “With the time frame this was a good spot for the horse.”

Walsh has another highly regarded horse that will be making a comeback soon, one of nine that he discussed for HRN’s Barn Tour series.

Minor though it may have been, a cough last month put a halt to this Godolphin homebred’s trip down the Kentucky Derby trail. But only briefly.

A 48.4-second breeze the morning of the Fountain of Youth told Walsh the Medaglia d’Oro colt was ready to get back on the trail. He had another breeze scheduled for Friday morning. As for the next race Walsh said it will be coming quickly, but he was not sure where.

“We’ve got him nominated for everything,” Walsh said.

Prevalence won his January debut by 8 1/2 lengths and is best-priced at 30-1 in Las Vegas futures to win the Kentucky Derby.

There is nothing like a deep closer winning his debut to raise the eyebrows of horseplayers. This Big Blue Kitten colt did just that going a mile on the turf Jan. 23 at Tampa Bay Downs.

[Related: Horses to Watch: 12 names to know for exciting weekend]

Walsh was hoping to race him this weekend.

“I put him in (the Columbia Stakes) at Tampa Bay on Saturday, and he didn’t have enough earnings,” he said. “He’s on the also-eligibles. I need to find something else I can do with him.”

Even though she finished sixth at 22-1 odds in a seven-furlong dirt debut last Saturday at Gulfstream Park, Walsh singled out this $190,000 Street Sense filly as one of his prospects to watch this year.

“She got drawn into the ‘1’ hole her first time out,” he said. “I think we’ll hear a little more from her.”

After 49 races in North America, the durable 8-year-old millionaire is making a road trip to the greener grass of the Middle East. He will be in the March 28 running of the six-furlong $1 million Al Quoz Sprint (G1).

“He’s getting a little older, and we’re thinking it might be a good time to bring him out to Dubai,” Walsh said. “The last couple years we thought about it. He’s just a model of consistency.”

Walsh said the goal for the Kiss the Kid gelding is another crack at the Breeders’ Cup Turf Sprint, in which he finished fourth last year, only a length behind the winner Glass Slippers.

Winless in his 13 starts since the 2019 UAE Derby (G2), the 5-year-old Point of Entry ridgling has come up short in three consecutive allowance races at the Fair Grounds. That is where Walsh will continue trying to get him over the hump.

“I’d like for the horse to win a race and get some confidence," Walsh said. "He’s been working away good. I think it’s a question of trying to find a race far enough for him. He could use a little extra ground than the mile-and-a-sixteenth. If we can find something a mile-and-an-eighth or further here soon, I’m sure he’d get his head in front before too long.”

His encouraging win in a Grade 3 turf sprint late last summer at Kentucky Downs was followed by three out-of-the-money finishes, including a switch to dirt to begin 2021.

“His form tailed off a little bit, so we turned him out,” Walsh said of the 4-year-old colt by Wootton Bassett. “We’ve got to give him a little time and just let him reset. Hopefully he can come back and win us a couple nice races like he did last year.”

Unraced since last spring, the 4-year-old No Nay Never colt has been retired.

“Unfortunately he got injured,” Walsh said. “We tried to bring him back, but it just wasn’t going to happen.

Last Saturday’s photo-finish loss to Got Stormy in the Honey Fox (G3) turf mile at Gulfstream Park did not discourage Walsh.

“She was very unlucky,” he said. “There was not enough pace, and she had to move early and go wide. But she ran a really good race and got beaten a nostril by a champion.”

Walsh said the Jenny Wiley (G1) at Keeneland next month or the Distaff Mile (G2) on the Kentucky Derby undercard would be next for the 5-year-old Zoffany mare.

The 8-5 morning-line favorite for Saturday’s Big ’Cap at Santa Anita is the epitome of last but not least. If not for a stretch of more than two years when he was limited by injuries to one race, there might be no debate that he is one of the best in the older division.

“I would like to think as the year goes on that he could prove to be,” Walsh said. “I’ve heard people say that he hasn’t beaten horses of note yet. That was our whole point in bringing him to the Fair Grounds. That we could get some seasoning into him, and I think it prepared him to take on better horses. I feel now as he progresses he’s getting more and more ready to take on whoever he needs to take on.”

A victorious visit to California this weekend would be a step in that direction.

“Hopefully we get lucky this this year and we can get a good body of racing into him,” Walsh said. “Then he can prove how good he is.”