Barn Tour: Morley is hot; what is next for his horses? 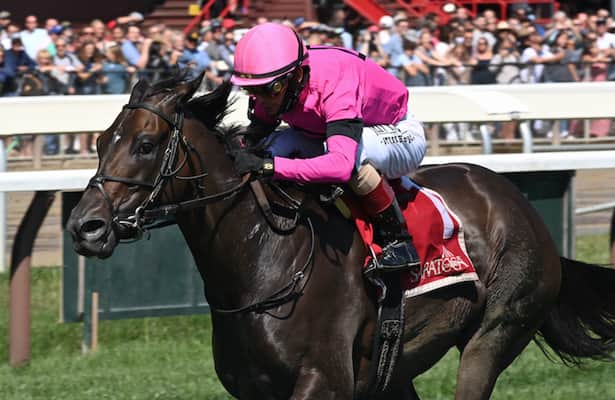 Tom Morley does not quite make the top 10 in the number of starts he has had at the Belmont Park fall meet. With 16 starts, he is far behind the dozens posted by the top names on the list.

But he is tied for second in the win column with seven, and his win percentage leads all trainers with more than 10 starts. Looking ahead, he is sending two starters to stakes races this weekend.

Morley provided Horse Racing Nation with a rundown of his top horses for the latest in the Barn Tour series.

Tell Your Daddy, winner of the Bernard Baruch (G2) last out, is pointed to the Keeneland Turf Mile (G1), a qualifier for the Breeders' Cup Mile. "He's been doing great," Morley said. "I got back from England this morning, and I was thrilled with the way he looked. His weight's fantastic, his coat looks good, he's moving well. There's absolutely no reason not to have a crack at it and see where we stand. He's a horse who's just improved all summer. And he's done very little wrong. And then obviously winning the Baruch at the end of Saratoga was was fantastic."

Temple won an allowance optional claiming race at Belmont last out, his first win since April 2020. "Tempo goes to the Knickerbocker (G3) on Sunday. We're going to have a crack at that. There's very little options for him. He's really best at nine and 10 furlongs, and there's there's really not a lot else for him. And I feel the way he ran last time at Belmont for us, he deserves a shot in one of these races."

Ocala Dream has won three of his last four races, including a New York Stallion Series Stakes at Belmont in June. He won a Belmont allowance race by a nose last out, and Morley is considering two options: the limited Glen Cove Stakes at seven furlongs on Oct. 15 and the Hill Prince (G3) at 1 1/8 miles on Oct. 23, both on turf at Belmont. "Ocala Dream loves Belmont Park. I thought that was a really good allowance win. He's a horse who has won twice at a mile-and-a-sixteenth, but I think that really stretches him. And obviously he's a stakes winner at seven furlongs already, so I'm leaning towards the listed race going seven-eighths for him."

Locally Owned won the Grand Prix American Jockey Club by a length over heavily favored Lone Rock last out on Sept. 18 and is headed to the 1 5/8-mile Thoroughbred Aftercare Alliance (G2) on the Breeders' Cup Saturday undercard Nov. 6. "Obviously, winning the race here and defeating Lone Rock gave us the confidence that he really does see these marathon trips out. It was a surprise to be able to beat Lone Rock, but he was obviously not at his absolute best for that race. But he couldn't have done it any better. And (jockey Dylan Davis) really felt that the added distance was a real bonus there because he's a horse who, he's a little quirky in his races. If he has to run around horses into a fast pace to a mile-and-a-sixteenth, then he sometimes struggles around the second turn. But but he got so much confidence out of being able to travel into the race on the bridle the way he did here in the Invitational."

Social Whirl has won three straight, two at Saratoga, and then an allowance at Belmont last out. "What a cracking little filly she's been for us this summer. … She's a 3-year-old filly and she's done nothing but improve all summer. She's not the biggest filly in the world. We do a lot of weighing of our horses, and she's been absolutely remarkable to follow her weight chart through the summer because she puts weight on after every single race. Now I don't think she's growing particularly, but I just think that she's filling out and getting stronger and stronger and stronger – and improving 3-year-old fillies are very dangerous horses to run again."

Sweet Franny Lu won by a neck in a blanket finish on turf at Belmont last out. "Sweet Fanny Lu has been a little bit of a difficult one for us, because I've always felt that she was going to be a better grass horse than she was on the dirt. The only time she's run on fast dirt, she was very disappointing, but she handles a wet track just fine. But her three starts on turf have been very good. … She was really impressive the other day, again, another 3-year-old filly who just appears to be improving. She is a bigger, scopier type. So there was always the thought in my mind as the year went on that she was going to get better. And she's done everything right so far. She'll now point towards a one-X stake race later this month here as well."

As for the other winners at Belmont this week, Now Yus Cant Leave and Zoomer both were claimed by Robert Falcone Jr.