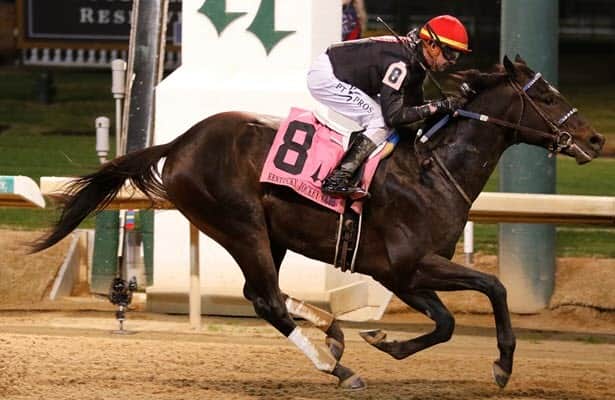 Photo: Candice Chavez/Eclipse Sportswire
Check out Barn Tours on Horse Racing Nation
Kenny McPeek is enjoying his best year as a trainer, with a career-high $7 million in earnings.

"It's been a really good 2021," he told Horse Racing Nation on Wednesday morning. "So no complaints."

And as has been the norm the last several years, he has a strong string of 2-year-olds. The difference this year is that many of them are colts, rather than fillies.

"I think we've had a rash of fillies for the last five or six years, going back to, I guess, Daddy's Little Darling and Swiss Skydiver, Crazy Beautiful," he said. "We've had so many good fillies but this year it seems like we're really heavy on colts."

McPeek updated HRN on his top talent for the latest in our Barn Tour series.

Many of his stars are getting a break at McPeek's Silverleaf Hills Farm in Florida, including Falls City (G2) winner Envoutante, Summertime Oaks (G2) and Delaware Oaks (G3) winner Crazy Beautiful and Lexington (G2) winner, King Fury, ahead of spring campaigns at Keeneland and Churchill Downs.

Among juveniles, Smile Happy is 2-for-2 after his 3 1/4-length win in the Kentucky Jockey Club. "Smile Happy is at Gulfstream also. Same thing, had a little bit of a break since his win, and I might work him Saturday, give him a little three-eighths and ease him back into things. He's going to be pointed towards, looks like the Southwest. But that's not set yet."

Dash Attack is entered in the Smarty Jones, a Kentucky Derby points prep Saturday at Oaklawn as a brand new 3-year-old. He graduated on debut at Oaklawn at a mile on Dec. 5.

Tiz the Bomb, a late scratch from the Nov. 27 Kentucky Jockey Club (G2), is at Gulfstream. "He's going to get back into a work routine, maybe even this weekend. No races scheduled yet. Just, he got a break after he had that little infection, and we're just easing him back in to things."

He has won three of five starts, finishing second last out in the Breeders' Cup Juvenile Turf.

Rattle N Roll was scratched from the Breeders' Cup Juvenile because of an abscess and has not raced since winning the Breeders' Futurity (G1) on Oct. 9. "He's doing fine," McPeek said. "He's galloping at Gulfstream. Not not ready to work yet but doing well."

Even though McPeek has these impressive young colts in his barn, he has no shortage of talented fillies, such as Sandstone, who is 2-for-4 and finished third in the Golden Rod (G2) last out. "She's a good filly that's going to be pointed towards the (Kentucky) Oaks."

"And we've got Cocktail Moments, who ran third at the Fair Grounds the other day – that filly's got a big future. Bhoma, coming off a win, she's a good filly, and several others."