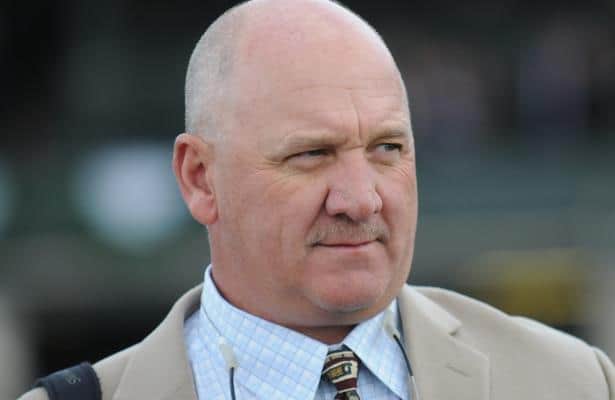 Swiss Skydiver, perhaps the biggest star in Kenny McPeek's barn, started 2021 with a promising win in the Beholder Mile (G1) but then finished third in a tough Apple Blossom (G1), behind Letruska and Monomoy Girl.

"She's galloping at Saratoga right now," McPeek said. "She's getting ready to get into a little breeze routine. We're pointing her to the Shuvee" (G3) on July 25.

In the meantime, he has plenty to keep him busy as he shuttles between Keeneland and Churchill Downs.

Coming up this weekend, for example, Envoutante takes on a tough field in the Fleur de Lis (G2) at Churchill Downs, and King Fury travels to Thistledown for the Ohio Derby (G3).

McPeek talked to Horse Racing Nation Monday to provide an update on the stars and up-and-comers in his barn.

Envoutante. Winner of the Shawnee Stakes and runner-up to Shedaresthedevil in the La Troienne (G1), the Uncle Mo filly remains at Churchill for Saturday's Fleur de Lis. "It's a great spot for us, it's on our home track," McPeek said. "She just has to walk over, she's trained there all her life." He doesn't seem concerned about a field that includes Letruska, Vault and Spice is Nice. "We've got her locked and loaded. She's on her home court and we're ready to go." Brian Hernandez will have the mount.

King Fury. The Ohio Derby will be the second start of the year after the Curlin colt won the Lexington (G3) in April. He has been working at Churchill Downs. "He's doing super," McPeek said.

Crazy Beautiful. "Crazy Beautiful is going to the Delaware Oaks on July 3. She's going to be ridden by Mike Smith again." Smith was aboard for her last race, a win in the Summertime Oaks (G2) at Santa Anita.

Oliviaofthedesert. She won her first race in four starts this year when she scored in the Panthers Stakes at Prairie Meadows. She is pointed to the Iowa Oaks (G3).

Semble Juste. This 3-year-old Ireland-bred filly broke her maiden at one mile on her seventh try on June 12. "Indiana Oaks. We're leaning towards it. She's a filly that seems to be finally figuring it out – likes the dirt better than the turf."

Gran Baby. The 5-year-old Chile-bred mare has five wins in 13 starts in her home country and will make her first U.S. start in the Lady Jacqueline Stakes at Thistledown on Friday. "She's a group 1, 2, 3 winner in Chile."

McPeek told HRN in March that he had "fantastic" 2-year-olds coming up. Several have had their first starts (or more), and McPeek said Monday that "we've got a list of them that'll be ready a little bit later in the fall."

Here is a rundown of some of his promising 2-year-olds who have raced:

Behave Virginia. This Unified filly broke her maiden on first try by 5 3/4 lengths and will make her next start in Saturday's Debutante at Churchill Downs.

Climb and Maintain. A gelded son of Sky Mesa who won his debut by 3 3/4 lengths on June 12 at Churchill Downs. "He's likely going to run in Florida. I'm going to send him down for the small stake on the 21st of August. Going to run him a little longer, but he's doing well. "

Penny Saver. A Super Saver filly who finished second in her debut at Churchill Downs on Friday. "She's going to go to to Saratoga for the summer. … Really lovely filly."

Creative Bid. The Creative Cause colt has yet to break his maiden after two tries at Churchill. "He's going probably come back at Ellis and run longer."

Tiz the Bomb. After a seventh-place finish in his May 14 debut, this son of Hit it a Bomb will run on July 2 at Ellis Park, McPeek said.