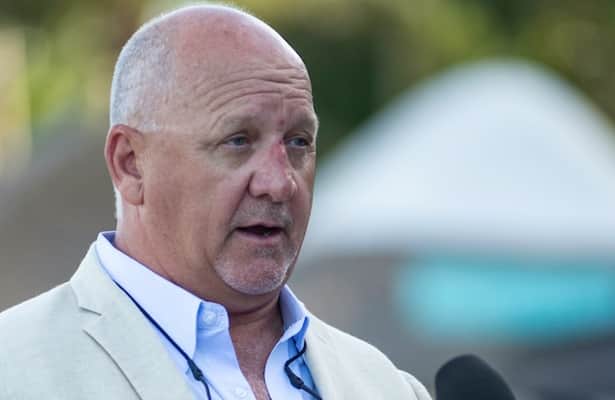 It’s fair to say that Kenny McPeek is on a roll.

See who is fastest early with the Pace Report
A Horse Racing Nation feature last December listed his lineup of soon-to-be 3-year-olds, and most are familiar names 10 months later. He has $7.5 million in earnings this year, a career high.

And McPeek appears to be loaded again, with seven 2-year-olds entered in Breeders' Cup qualfiers this weekend at Keeneland. And he picked up qualifying points for the Kentucky Derby and Oaks with Fun and Feisty’s win in the Pocahontas (G3) and Honed’s runner-up effort in the Iroquois (G3).

Think that’s a lot? “I hate to tell you, but I've got some that haven't even run yet that might be better than the group I'm running,” he said with a laugh. “So we'll see. It's a good, solid group. And we've been able to get some maidens broke to give them a chance in these spots. And they're all doing well. I tend to do a little bit better once the races stretch out. None of these have been winners going short. They've all done it going a mile. I think that the added ground, we’re a little more efficient at.”

At Keeneland Tuesday, McPeek provided an update on his top talent and those seven 2-year-olds who are running in this weekend’s graded stakes in Lexington.

Classic Causeway. After eight starts on dirt, the 3-year-old Giant’s Causeway colt switched to turf and won the Belmont Derby (G1) followed by thirds in the Saratoga Derby (G1) and Jockey Club Derby (G3). He’s pointed next to the Keeneland Turf Mile on Oct. 8. “It’ll be his first round against older horses and shortening the distance, which I think he might like, and sticking to the grass,” Mc Peek said.

Rattle N Roll. The 3-year-old son of Connect won three of his last four starts, most recently taking the Oklahoma Derby (G3). He’ll run next in either the Oct. 29 Fayette at Keeneland or the Thoroughbred Aftercare Alliance (G2) on the Breeders’ Cup Friday undercard. “We're hoping to run him a couple more times before the end of the year, and then we'll give him a little rest for the winter. He might also go to the Zia Park Derby late in the season.”

Creative Minister. Unraced as a 2-year-old, the son of Creative Cause tried the Preakness (third) and Belmont (fifth) after two straight wins in Kentucky. Last out, he was second by a nose to Home Brew in the black-type Bourbon Trail at Churchill Downs. “He's definitely going to run at Keeneland, I'm not sure where yet. He may surface back in an allowance race or the Fayette also.”

Tiz the Bomb. Another of McPeek’s talented 3-year-olds, the Hit It a Bomb colt finished ninth in the Kentucky Derby and Preakness and then was fourth last out in the National Museum of Racing Hall of Fame (G2) on Aug. 5. He has no published works since. “He is getting started back into training here this week. He's been out, he overextended his back of his right knee – nothing major. He’ll be back and should be 100 percent.”

Butterbean. The 3-year-old Klimt filly broke her maiden in July and then won three straight, including the Iowa Oaks (G3). She was fifth last out in the Coaching Club American Oaks (G1). “Butterbean’s got a little layoff. She's due to come back in training this week.”

Smile Happy. The 3-year-old Runhappy colt started the year with runner-up efforts in the Risen Star (G2) and Blue Grass (G1) before finishing eighth in the Kentucky Derby. He has not raced since. “He’s due to come back in training this week. He's had a little distal bone bruising.”

Dash Attack. The 3-year-old gelded son of Munnings has not raced since winning the black-type Long Branch in May. “Dash attack is probably not going to go back in training until the first of November. His ankles were bugging him a little bit, and we decided to back off.”

Crazy Beautiful. The 4-year-old Liam’s Map filly has finished in the money in three of her last four starts, including second last out in the Locust Grove (G3). She’s a possible for the Spinster (G1) this weekend at Keeneland, McPeek said. “We haven’t decided yet.” An allowance later in the meet also is a possibility.

King Fury. The 4-year-old Curlin colt has raced only three times this year and finished third in Saturday’s Lukas Classic (G2). “He'll come back in probably the Fayette.”

Fun and Feisty. The Midshipman filly broke her maiden on third try and then won the Pocahontas (G3) by 3 1/2 lengths over a full field. She’s one of two McPeek fillies entered in Friday’s Alcibiades (G1) at Keeneland. “This can be a really special filly," McPeek said. "The stretch out did her good. And I think the Alcibiades, she's got a pretty good aim at it.”

Honed. The Sharp Azteca colt broke his maiden on first try and then was second in the Iroquois (G3). He’s entered in the Breeders’ Futurity (G1) Saturday at Keeneland. “He’s doing good, worked with Frosted Departure last weekend. I think if he'd run a straight line in the Iroquois, he wins. But he was quite green. We've been working on some of that, trying to get him a little more direction.”

Stellar Lady. The daughter of Shackleford broke her maiden at Kentucky Downs last month after two tries at Saratoga and also is entered in the Alcibiades. “I think she's a filly that wants to go a little bit. I think she wants to run dirt. And she won on the turf irregardless last time out. But I really think dirt's a better surface for her, and we worked her and Fun and Feisty together last weekend and they were a pretty good match and I think she'll run for a piece of it.”

Frosted Departure. The Frosted colt is 2-for-4 after winning a Churchill Downs allowance by 9 1/4 lengths last out. He’s “all set” for the Breeders’ Futurity (G1) Saturday at Keeneland.

C C Cruise Control. A daughter of Cross Traffic, she is 1-for-3 and finished third in a listed stakes at Kentucky Downs last out. That start and her maiden breaker were on turf, and her other starts, sixth- and ninth-place finishes, were on dirt. She is entered in the Jasmine (G2) on Friday. “I think she'll like two turns and turf a little bit better.”

Rarified Flair. The Honor Code colt broke his maiden at Saratoga in August on second try and then was second in the Kitten’s Joy last out at Colonial Downs. He’ll run in Sunday’s Bourbon (G2) at Keeneland.

B Minor. The son of Mendelssohn had his first start on Sept. 3 and then broke his maiden 13 days later at Churchill. He’ll run as an entry with Rarified Flair Sunday in the Bourbon.