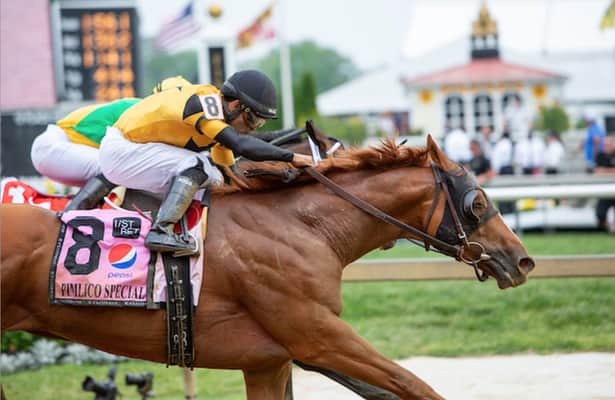 First Captain has been an exercise in patience for Hall of Fame trainer Shug McGaughey.

The son of two-time Horse of the Year Curlin was purchased for $1.5 million as a yearling and is owned by West Point Thoroughbreds, Siena Farm, celebrity chef Bobby Flay and Woodford Racing. Any hope they had for a quick return on investment was dashed when the youngster went unraced at 2.

“He was late getting started and needed to mature,” McGaughey said.

The willingness to give First Captain the time he needed was rewarded when he rattled off a career-opening three-race win streak in a stretch capped by a victory in the Dwyer Stakes (G3). That abruptly ended when the colt finished a disappointing third in the Curlin Stakes. He did not race again after July 30 as a sophomore.

McGaughey again gave the horse ample time to regroup. First Captain returned to competition with a victory in a Feb 27 allowance claiming race at Gulfstream Park only to flop by finishing last of seven in the April 9 Carter Handicap (G1) at Aqueduct.

He rebounded with an impressive rally in the May 20 Pimlico Special (G3), his fifth victory in seven starts and one that McGaughey hopes finally has the high-priced talent ready to fulfill his considerable potential.

“He’s training really, really well,” said the Lexington, Ky., native. “Since the Pimlico Special, I couldn’t ask for him to be doing any better.”

The acid test will come on Saturday at Belmont Park, when First Captain will compete in the $400,000 Suburban Handicap (G2) at a mile and a quarter as part of a short but talented field of five.

Here is a look at other standouts in McGaughey’s perennially strong barn:

Kathleen O. This dark bay daughter of Upstart looked virtually unbeatable when she launched her career with four consecutive victories, the last two of those coming in the March 5 Davona Dale (G2) and the April 2 Gulfstream Park Oaks (G2). She seemed to be set up perfectly for the Kentucky Oaks, the biggest race she may ever run. She lacked late punch and finished fifth, leading McGaughey to decide that a freshening was in order. McGaughey: “She’s just been in a field. I was getting ready to pick her up and I said, ‘I’ll give her more time.’ ” She is expected to resume training any day now with a fall campaign in mind.

Limited Liability. McGaughey’s high regard for this son of Kitten’s Joy is reflected in his willingness to enter him in the $1 million Belmont Derby (G1) on Saturday. The Stuart Janney homebred will oppose a deep field that includes a significant number of international standouts. Limited Liability has finished third in each of a trio of stakes appearances, most recently to Belmont Derby rival Emmanuel in the June 4 Pennine Ridge (G2). McGaughey: “The older he gets, the better he’ll get.”

Stolen Holiday. This 5-year-old War Front mare, owned by Annette Allen, finally broke through for her first graded-stakes victory when she prevailed in the June 18 Eatontown (G3) at New Jersey’s Monmouth Park. The gate-to-wire decision marked her fourth win in 10 starts. McGaughey: “She’s doing fine. I’m not sure what I want to do with her yet.” A start at the upcoming Saratoga summer meet is possible.

Vigilantes Way. A 5-year-old mare by Medaglia d’Oro, this Phipps Stable homebred is the kind of ultra-consistent horse owners and trainers dream about. She has hit the board in 14 of 17 starts, including six victories and five runner-up efforts. Her next start likely will come in either the July 23 Matchmaker (G3) at Monmouth or the Aug. 7 De La Rose at Saratoga.

McGaughey estimates that he will give 10 to 15 2-year-olds their first starts at the Saratoga meet, which begins July 14 and extends through Labor Day. “I’m looking forward to getting a lot of these 2-year-olds going and seeing which ones separate themselves,” he said.

He drew attention to three juveniles in particular. Capture the Flag, a Quality Road colt by War Flag, certainly has pedigree on his side. Self Confidence, an Into Mischief filly out of Sabbatical, looks to be a promising runner for Phipps Stable. Full Coverage, a Kitten’s Joy colt, is poised to launch his career on turf.

“I think we’ll do fine up there,” McGaughey said in embracing the stiff competition at Saratoga.