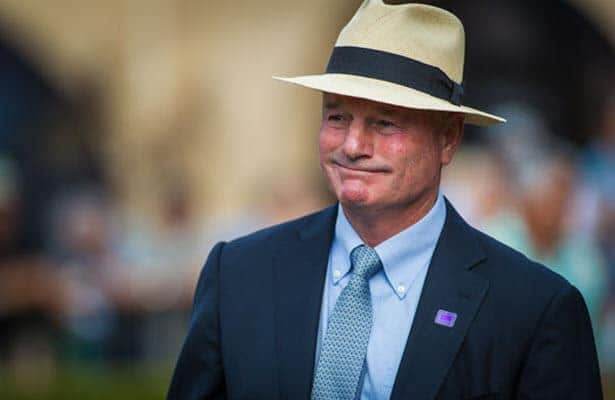 Richard Mandella has had his share of success when it comes to the Breeders’ Cup.

During his Hall of Fame career, the 70-year old trainer has racked up nine wins at the annual “World Championships” – including an unmatched four on a single day at Santa Anita in 2003 – to tie for sixth all-time in that category with fellow Hall of Famer Shug McGaughey.

That record of success comes despite having started far fewer horses (47) than his competitors through the first 37 editions of the Breeders' Cup.

This year’s Breeders’ Cup, set for Del Mar on Nov. 5 and 6, is a virtual home game for Southern California-based Mandella. His stable is coming off a productive Del Mar meet, banking $784,220 with a record of 35: 5-6-6. Interestingly, the only previous time the event was held at Del Mar, in 2017, Mandella did not have a starter. That does not figure to be the case this time.

On Tuesday, Horse Racing Nation caught up with Mandella to get the latest on his prospects for the Breeders’ Cup and other stable doings.

Forbidden Kingdom. Of Mandella’s nine Breeders’ Cup victories, his lone win in the Juvenile came with Action This Day on that magical day at Santa Anita in 2003. He could aim for a second with this colt.

Forbidden Kingdom debuted going 5 1/2 furlongs at Del Mar on Aug. 21 and promptly took the field gate to wire to win by a half length under Juan Hernandez. The son of Triple Crown winner American Pharoah has come back to work three times and is possible to make his next start in his sire’s namesake race at Santa Anita on Oct. 1, a “win and you’re in” for the Breeders’ Cup Juvenile.

“He’s doing good,” said Mandella, who is well known for his patient handling of young prospects. “But I haven’t figured out exactly where to bring him back. I have given a little thought to the American Pharoah. I’m just not sure if he’ll be quite ready to step into a Grade 1 like that off just the one race.”

Forbidden Kingdom is out of the Five Star Day mare Just Louise, who won the 2010 Debutante Stakes (G3) at Churchill Downs sprinting six furlongs. He was purchased for $300,000 at the 2020 Fasig-Tipton Kentucky select yearling sale by Spendthrift Farm and MyRacehorse, who also campaign the colt.

Dogtag. The 5-year-old mare has made four starts this year, all in graded stakes and all ending in second-place finishes, including most recently in the John C. Mabee (G2) at Del Mar on Sept. 4.

Mandella said the 1 1/4-mile Rodeo Drive (G1), a win-and-you’re-in for the Breeders’ Cup Filly & Mare Turf, will be next for the 5-year-old daughter of War Front.

Dogtag has been graded-stakes placed five times in her 14-race career, but a coveted win in such a race to enhance her broodmare value has proven elusive.

“She’s run very well and just been unlucky a few times,” Mandella said. “We’ll keep tinkering with her and hope it works out.”

Bombard. He made a return trip to Kentucky Downs for a second try in the Turf Sprint (G3) on Sept. 11, where he set the pace before “grudgingly” finishing third, as the chart notes document. Last year, Bombard was second in the race. This year's winner, Gear Jockey, completed six furlongs in a track record 1:07.90.

“I thought he ran very well. The (winner) broke the track record and we were beaten a nose for second, so I thought that was a good race,” Mandella said.

United. After an uncharacteristic poor effort in the Charles Whittingham (G2) to close out the Santa Anita meet in late May, he got back on the beam July 24 by winning the Eddie Read (G2) at Del Mar for the second straight year. He followed that effort a month later with a troubled fourth in the Del Mar Handicap (G2) when beaten less than a length.

“Things just didn’t break well for him that day,” Mandella said, referencing United being in tight quarters at the top of the stretch. “I hope it goes better for him next time.”

Tizamagician. After finding success at marathon distances on the dirt this year, he was cut back to a mere 10 furlongs for the Aug. 21 Pacific Classic (G1) and finished a solid second after setting the pace for the opening mile. He is now possible to cut back an additional furlong in the 1 1/8-mile Awesome Again, a win-and-you’re-in for the Breeders’ Cup Classic.

"We’re going to take a look at that,” Mandella said.

Royal Ship. He won the Californian Stakes (G2) this spring and was second in the Hollywood Gold Cup (G1) to close out the Santa Anita meet, then was beaten just over a length when third in the July 17 San Diego Handicap (G2). He joined stablemate Tizamagician in the Pacific Classic and was a disappointing seventh as the second-choice.

Mandella said Royal Ship will receive a “a couple months rest and we’ll point him to the spring.” He added there was nothing physically wrong with the 5-year-old Brazilian-bred.

Soothsay. The 3-year-old filly by Distorted Humor has three wins in four starts in a career that started Feb. 26, including the Santa Anita Oaks (G2) and Indiana Oaks (G3). Her lone blemish was a second to Crazy Beautiful in the Summertime Oaks (G2) at Santa Anita in the spring.

Following her July 7 win in the Indiana Oaks, Soothsay returned to Southern California and worked three times in August. However, she subsequently developed a physical issue that has forced her to the sidelines.

"She’s come up with a (bone) splint. So we’ll have to give her a rest and treat that,” Mandella said, adding he expects she will be ready for the Santa Anita winter-spring meet that opens Dec. 26.

Moonlight d’Oro. Unraced since winning the Las Virgenes (G3) at Santa Anita in February, the sophomore filly by Medaglia d’Oro returned to the work tab Aug. 26 and has been breezing once a week in the interim.

Mandella said Moonlight d’Oro exited the Las Virgenes with a bone chip in a knee that was removed surgically and sent her to the sidelines. He indicated it is unlikely she will compete at the short, stakes-filled Santa Anita fall meet that opens Oct. 1.

“She is still about three or four weeks from being ready,” Mandella said. “I don’t really have anything planned for her yet.”