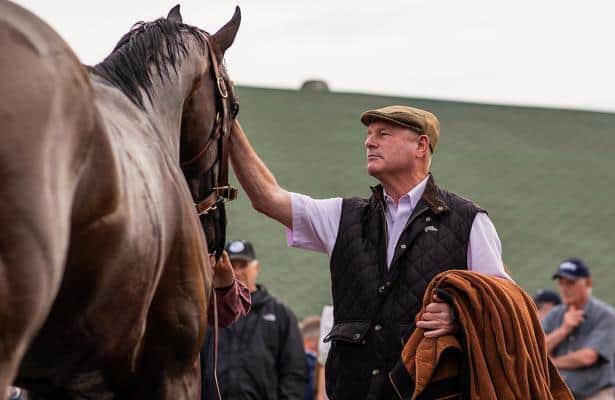 Trainer Richard Mandella, closing out his 45th year operating a racing stable in Southern California, is in the midst of another typical Mandella-like season.

With his usual modest-sized shedrow, the Hall of Fame conditioner has hit at a 21 percent clip from 166 starters this year and banked $3,681,476 in purse earnings. He has tallied 11 graded-stakes wins, including a pair by United, who Mandella said would be back for a 7-year-old campaign.

Mandella has won nine Breeders’ Cup races to tie with Shug McGaughey for seventh-most all time by a trainer. This year, he had just one starter for the World Championships at Del Mar: 5-year-old mare Dogtag, who checked in 10th of 12 when ambitiously placed in the Breeders’ Cup Filly & Mare Turf for LNJ Foxwoods.

On Friday, the 71-year-old trainer spoke with Horse Racing Nation for a Barn Tour.

United. The veteran gelding, also owned by LNJ Foxwoods, had to be scratched from a third try in the Breeders’ Cup Turf when developing a foot abscess the week of the race. Mandella said the recovery has gone smooth, but he will spend time at Peacefield Farm in Temecula, Calif. before returning for a fifth season of racing.

“We’re going to give him a few months off and then re-scan it, make sure everything’s OK before we put him back in training,” Mandella said.

Of course, Mandella has long been known for his work with older geldings. Perhaps most notably, he guided The Tin Man to a trio of Grade 1 wins, including the Arlington Million, as an 8-year-old in 2006.

Moonlight d’Oro.  The winner of this year's Las Virgenes (G2), she missed almost the nine months recovering from a bone chip before returning to be second in the Nov. 3 Seashell Stakes at Del Mar after stumbling at the break.

Stepping up in last weekend’s Bayakoa (G3) at Los Alamitos, the Medaglia d’Oro filly was last early and then grinded her way to a non-threatening third behind winner As Time Goes By.

Subconscious. After taking four starts to earn his diploma, the 3-year-old Tapit gelding has since gone on a quick ascent. He came right back to beat entry-level allowance foes on the turf at Santa Anita, then stepped up and took down the Oct. 31 Twilight Derby (G2) at Santa Anita.

Tested in the Hollywood Derby (G1) a month later, Subconscious would disappoint when fifth as the 4-1 second choice in the wagering.

“He came out of that fine, but he lost a little weight. Maybe that was one race too many as hard as he’d been trying,” Mandella said.

Following that effort, Subconscious was also sent to the farm for a little freshening. Mandella expects to have him back at the barn next week.

“He’ll probably be six weeks from running, something like that,” Mandella said.

Forbidden Kingdom. Mandella’s most accomplished 2-year-old was a debut winner on the Del Mar main track this summer then came back to be third in the five-furlong Speakeasy when trying turf at Santa Anita. Most recently, the son of American Pharoah was second to Messier in the Nov. 14 Bob Hope (G3) on dirt at Del Mar.

Forbidden Kingdom developed a foot abscess of his own after the seven-furlong Bob Hope, Mandella said, and he has yet to return to the work tab.

“It's getting pretty good,” he added. “I’m hoping to breeze him in a few days.”

Forbidden Kingdom was a $300,000 auction purchase as a yearling by Spendthrift Farm and Myracehorse.com.

Tizamagician. The 4-year-old Tiznow colt quietly banked $543,000 this season with a record of 9: 3-4-0 for Spendthrift and Myracehorse. He won the Tokyo City Cup (G3) in the spring at Del Mar and the Cougar II (G3) at Del Mar in the summer, both at a mile-and-a-half on the main track. After a runner-up finish in the 10-furlong Pacific Classic (G1) this summer, he returned to be fifth in the shorter Awesome Again (G2) at Santa Anita then was again second in the marathon Thoroughbred Aftercare Alliance (G2) on Breeders’ Cup Saturday.

Tizamagician is also in the midst of a winter break.

“He’s had a hard campaign, we’ll give him a couple months at the farm and point him to next year,” Mandella said.

Royal Ship. The Brazilian-bred 5-year-old by Midshipman won the California Stakes (G2) in the spring and came back to be second in the Hollywood Gold Cup (G1) and then third in the San Diego Handicap (G2). Following a disappointing seventh as the second-choice in the Pacific Classic (G1) in August, he was also sent to the farm for a break.

“He has had a nice rest and just came back to me at Santa Anita last week,” Mandella said. “He’ll be ready in March sometime.”

Sumter. After a dismal debut on dirt at Del Mar this summer, the 2-year-old War Front colt was switched to turf and three starts later rolled by 3 1/4 lengths to earn his diploma at Del Mar on Nov. 14.

Sumter has since returned to the work tab and is pointed to the $100,000 Eddie Logan going a mile on turf at Santa Anita on Dec. 31.

Mandella, who is not often stricken with Kentucky Derby fever, does not plan to revisit the dirt for a Triple Crown try with Sumter.

“Not unless I go off the deep end or something,” he said.