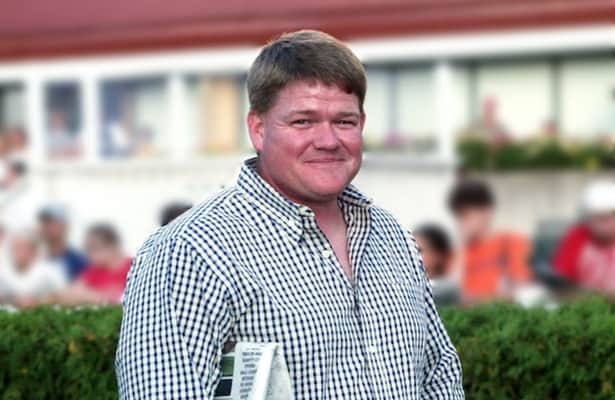 It's early days at Canterbury Park, where the 2022 season opened on May 18. But Mac Robertson is right where you might expect, atop the leaderboard with seven wins from 14 starts as he pursues his 15th training title at the Minnesota track.

Robertson talked with Horse Racing Nation Tuesday about why he likes Canterbury Park and why he's very content in Minnesota as opposed to, say, Kentucky. And he discussed some of his top runners.

Robertson had trained with his father, Hugh, in Chicago, until the operation grew to the point that he broke off and went to Canterbury. As the track's fortunes waned, he moved to Delaware.

"And then they got the agreement with the Mdewakanton Indians for 10 years, so I went back."

"Money has been good for the Midwest the last 10 years, but this is the last year for that," Robertson said. "So we'll see what happens. If they don't gain money, I guess I'll go to the East Coast and stay there again."

But he's really hoping that the deal will be renewed.

"Minnesota is great. It's a great barn area. The Sampsons have been great for racing. They took a track that was closed, opened it back up. There's always at least one Sampson there – (track CEO) Randy Sampson, he's there for all the races every day. If you've got something to say, good or bad, he'll listen to you, which a lot tracks don't have. That's a big, big plus. And the barn area is great and really good stalls. There's a lot of grass, and you've got a training track. Main track, dirt. The weather's good, it's not 100 degrees like some of these places, which I hate. I think it's a good environment."

Then, of course, is the success he's had with his stable there.

"I've had a lot of good horses come out of Canterbury – we've had like 100 stakes winners come out of there. If you're successful at something, I keep it the same always. All owners want their horse to run in Kentucky but the competition is awfully hard there, and you beat up a lot of horses trying to win races there. This place has been good for me and good for my horses. I love it."

It's not just the winning that matters. Robertson believes Canterbury Park is the perfect place to develop young horses.

"I don't really think it matters where the horse starts if they develop. The main thing with horses is like anything else, if you develop a good foundation, then those horses go on and have a career. If you don't, then they don't finish good. I think Canterbury puts a good foundation in young horses, which I think is really, really important. Whether they start or not, I think they get going the right way. And you get the handle on horses. And if they run fast enough, you can always try them against tougher horses. Rewarding a good race with a tougher task, it's sometimes a mistake. All owners want to run the big races, but I want my horses to run for three or four years, not three or four races."

After wintering at Oaklawn, Robertson's operation is back in Minnesota, though the trainer was in Baltimore this week for the Fasig-Tipton 2-year-olds in training sale.

From there, he provided updates of horses in his stable for the latest in HRN's Barn Tour series.

Cinco Star is a 7-year-old gelding with a record of 28: 9-11-4. He has yet to start this year but had been working at Oaklawn. "He's a really versatile horse running short, long, grass," Robertson said. "A big sound horse. And he's 7 years old, but he's as good now is he ever was. We expect to get him started in the next month somewhere. And if he runs well, maybe even run him at Keeneland after Canterbury."

Clickbait is a 6-year-old mare with another strong record, 13: 7-4-0. She came back from an eight-month layoff to win Canterbury's Lady Slipper Stakes last week for the second year in a row. "She got hurt as a 2-year-old and hurt as a 3-year-old. And we gave her a bunch of time. Had a really good year last year. We gave her another extended rest, and she came back great and ran really fast the other night, did it pretty easy. She's actually a horse that has run well going along too, so we'll probably just run one or two more times at Canterbury. And depending on what they get for next year for money, I might take her to the East Coast and try her against better this fall."

Ready to Runaway (24: 12-7-3) was second in the Lady Slipper this year and last. "She was just a good claim, we claimed her for $25,000, she won real easy, I won a shake. She got good and just was kind of a win machine. She ran into Clickbait the other night, wasn't quite good enough. But she runs long and loves to win. Actually both those two fillies, they've both run like 15, 20 times at Canterbury and have never been worse than first or second. So obviously they're fun to see in the stall. They just run good every time."

Super Constitution (19: 2-8-3) isn't quite a win machine, but he is a 5-year-old son of Constitution. "He's a nice horse. He tries hard every time he runs. And hopefully he'll get a little better. Constitution's just a really solid stud. You see horses like him everywhere, every track there's Constitutions that run well, and he's one of them."

Let's Cruise (9: 4-3-0) is a 4-year-old filly who has yet to start in a stakes race. In her last race, at Hawthorne, she was entered by Hugh Robertson. "She's a really good filly. She'd gotten good at Oaklawn, and she's run a couple of big numbers. I don't know if we'll run her back at Hawthorne or she'll go to Delaware. … Dad and I switch horses every week, we switch a horse or two if it doesn't fit or a race doesn't go. It's a good luxury to have."

Beach Flower (55: 11-8-12) is a 9-year-old mare who is 0-for-3 this year and is entered in Wednesday's Minnesota HBPA Distaff Stakes. "She's been a good horse. She's tailing off a little. We were thinking about breeding her but she ran a good second at Oaklawn, so we'll probably run her through Canterbury. I know she's 9 years old, but she's made a half a million and obviously she's run good, 2 through 8. Every year she makes 80, 90 or $100,000. She's just been a great horse to have. Any horse that basically makes over 200, 300, you're proud to have them in your stable especially in the Midwest. She's over 500, so maybe she'll get to 600, who knows? But her last couple of turns weren't very good. But she's sound and likes to run, she's done well at Canterbury. I think they're calling for rain (Wednesday). If it comes off the turf, that'll probably help her too."

Plane Talk (17: 4-4-3) and Sir Wellington (11: 3-2-1) are entered in Wednesday's Honor the Hero Stakes. "Sir Wellington, he won a stake at Fair Grounds for Louisiana-breds, he won a stake at Oaklawn. But he hasn't quite found his best stride yet this year. But he fits good with that group, dirt or grass. And Plane Talk, he's stepping up. We got lucky and didn't lose him for $12,500. He ran a couple of good races at Oaklawn, he ran really good on the turf last year at Canterbury."