Barn Tour: Lynch has plans for Classic Causeway, 6 others 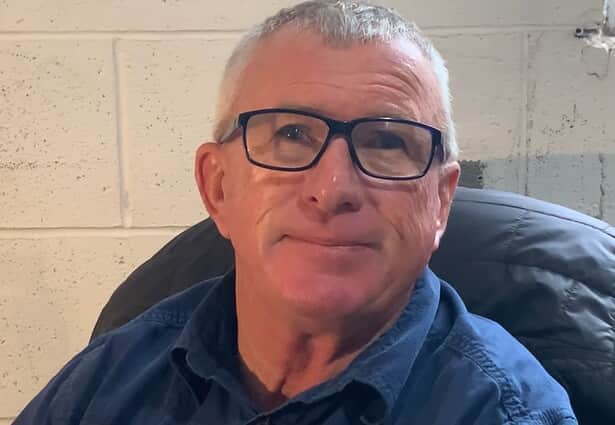 He might have been just a supporting player Saturday night in the Smile Happy show at Churchill Downs, but Classic Causeway still earned positive reviews for his runner-up finish in the Grade 2, $400,000 Kentucky Jockey Club Stakes.

“I thought he ran his race,” trainer Brian Lynch said. “I have no complaints with our guy. He rated. He sat where he needed to be. He made the move when he needed to and put himself in the race. He just got outrun.”

So it is on to Florida for the 2-year-old Giant’s Causeway colt who, like Smile Happy, has a best Beyer Speed Figure of 90 on his record. That was in a debut victory Sept. 4 at Saratoga. Classic Causeway has finished third since in the Breeders’ Futurity (G1) and second in Saturday’s latest points prep for the 2022 Kentucky Derby.

“We’ll go down to Florida and try and go from second to first,” Lynch said, adding that the Holy Bull (G3), Fountain of Youth (G2) and Florida Derby (G1) could be in Classic Causeway’s future.

In the closing days of the Churchill Downs fall meet, Lynch shipped his horses to the Palm Meadows Training Center in Florida. He also discussed some of them in a Horse Racing Nation Barn Tour.

Red Danger. Two summertime wins and a credible fourth in the Bourbon (G2) showed that this 2-year-old Orb colt can compete on the turf. Then Lynch moved Red Danger back to the dirt Oct. 31, when he placed second to Howling Time in the Street Sense Stakes at Churchill Downs.

“I thought he got beat by a horse that could potentially show up in any of these big races, and there was a little ways back to the third horse,” Lynch said. “It became a two-horse race, and I thought he ran really well. That was his fifth start as a 2-year-old, so I thought we would just give him a little bit of a breather.”

Lynch has penciled in the Dania Beach Stakes, a turf mile for new 3-year-olds, as a possible next start Jan. 1 for Red Danger.

“Or we could put him back on the dirt and see if he’s good enough to go on the Derby trail. The jury is still out on him.”

Lynch said morning workouts in Florida will influence his final call on the next start for Red Danger.

“If he can be a good workmate with Classic Causeway and show he’s competitive with him, maybe we’ll just go ahead and try him back on the dirt instead of going the grass route,” Lynch said. “At this stage he still might be just a step behind them. Not to say he’s not going to catch up with them. He’s just probably not as precocious as they are.”

Tobys Heart. Coming off a stakes triumph at Kentucky Downs, this 3-year-old Jack Milton filly finished fourth as the 8-5 favorite Oct. 29 in a wet, Grade 3 race at Keeneland.

“I thought she took the worst of it and wasn’t beaten badly,” Lynch said. “I think the winner relished the rain-affected turf that day, got loose on the lead and was a deserving winner. I think Toby ran really well. She got tucked down on the inside and was beaten less than a neck for the second.”

That race was at 1 1/16 miles. Tobys Heart’s four wins, including three stakes, have come in sprints. She hit the board in both her starts at one mile. She did not in her two races at 1 1/16.

“The predicament with her is do you try to keep her around two turns, or do you back her up and sprint here where you know she’s very effective?” Lynch said. “The good thing is she’s going to turn 4 in January, so she’s ‘4 and up’ now. There’s a good series of sprint races down there if we did want to shorten her up, or there’s no shortage of two-turn races.”

If Lynch wanted to jump the equine birthday by a day, he could put Tobys Heart in the five-furlong Abundantia on Dec. 31. Otherwise, he might have to wait and put her in the Ladies’ Turf Sprint going five furlongs Feb. 12.

“I’d certainly like to get some graded stakes on her this year,” Lynch said. “I think you campaign her back toward Kentucky Downs and those sorts of races. They are big purses. They are distances that certainly fall into her repertoire. I think Gulfstream will be the deciding factor. Will we go two turns, or will we back her up and sprint?”

Carotari. Lynch calls the 5-year-old Artie Schiller gelding “our stalwart that really likes Gulfstream.” Four sprints on the turf there with three wins and a second are evidence of that. He did not have a specific race in mind for his next start, but he knows where to choose. “They’ve got a good series of sprint stakes down there for 3-and-up boys, so he will certainly be pointed for all them.” The Dec. 31 Janus at five furlongs and the Feb. 12 Gulfstream Park Turf Sprint are possible targets.

Gift List. Lynch has some fillies who came into his barn from Europe. One of them was this 3-year-old by Bated Breath who was sold last spring and transferred from British trainer Karl Burke. In England, Gift List had a record of 5: 2-3-0. In America she is 3: 1-1-1 for Lynch, highlighted by a victory in the Edgewood (G2) on Kentucky Oaks day. Once race later, she had a setback.

“She was third in the prep for the Belmont Oaks, and then we cleaned up a little chip out of her ankle,” Lynch said, referring to the Wonder Again (G3) on June 3. Gift List has not had so much as a workout since and does not have a specific race for a goal.

“She will be down there in Florida,” Lynch said. “She’ll campaign through this winter, and she seems to be doing very, very well. She’s had a little bit of time, and she’s already showed us she’s a stakes-caliber filly over there. We’re excited about getting her back to the races.”

Mamba Wamba. This Ireland-bred 3-year-old filly by Mehmas raced 13 times for English trainer Adrian Nicholls, winning once in a novice sprint at York last September. After she finished fourth in a six-furlong handicap at Ascot, she was transferred to Lynch, who had not decided which race will be her next.

“She’s a sprinty type who’s run at Ascot, so she’s run on big stages,” Lynch said. “She’s a very clean-winded filly, and we haven’t seen a trace of anything after any work. We’ll just track on accordingly with her. She looks like an exciting prospect.”

Amber Storm. This 4-year-old filly by Night of Thunder is another Ireland-bred who has yet to race for Lynch. In fact, she has been on the bench since August 2020, when she won a handicap at York, England, for her second victory in four career starts. “She’ll be ready for Gulfstream, and she’s still eligible for couple conditions,” Lynch said. “She’s potentially a stakes horse down there getting ready for the spring back here at Keeneland.”

Lynch’s horses preceded him on the trip from Kentucky to South Florida. As for him, he said he would take his time.

“I put my car on a van, and then I drive down with my wife,” he said last week. “We go down through Ocala, and I have a chance to look at some young horses that we got through the sales that are now getting broken. We’ll take a day or so there, and then we’ll get set up and see what gets done through the winter.”