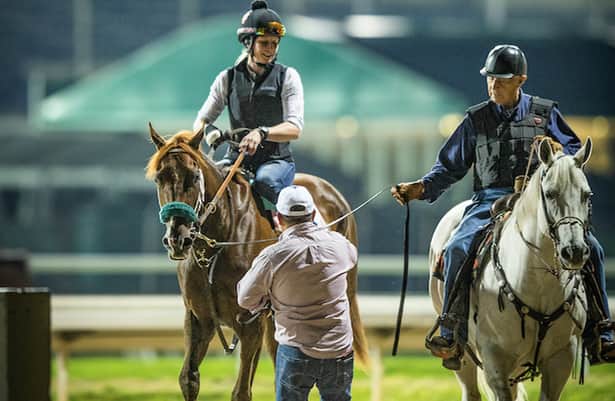 D. Wayne Lukas requires the aid of a step ladder to climb aboard his pony at Saratoga as he nears his 87th birthday on Sept. 2, but that does not keep him from accompanying each set of horses to the track for training each morning.

Although Lukas was missing from the big stage for a time, it seems there is no keeping him down. He has a primary contender for Saturday’s Coaching Club American Oaks (G1) in Kentucky Oaks victor Secret Oath and a considerable amount of other equine talent that he is developing.

Secret Oath. She returns to her division after finishing fourth in the Preakness. In her start before that on behalf of Briland Farm, she provided Lukas with his record-tying fifth Kentucky Oaks win and his first since 1990. Her lone work at Saratoga was a good one as she completed five furlongs in 1:00.01 on July 15. Luis Saez, Saratoga’s leading jockey last summer, was aboard for the drill and will ride her in the Coaching Club American Oaks. The race will bring a confrontation with Belmont Stakes runner-up Nest. Lukas said of Secret Oath’s final tuneup for her next start: “It was exceptional, I thought, the way she did it and the way she recovered so quickly. She was absolutely recovered by the time I picked her up with my saddle horse. That was good. That was what we were wanting to see. I hope I’ve got her tight enough.”

Summer Promise. The Sept. 4 Spinaway (G1) will be her next target after she and Saez ran second to Just Cindy by 2 1/4 lengths in the July 14 Schuylerville (G3). BC Stable purchased her for $500,000 as a yearling. Lukas on the Schuylerville: “I thought I did a poor job of getting her ready. I think she ran a good race, but I didn’t lean on her very much. That sandy, loose track got to her that last 100 yards or so. Luis might have moved a little early on her and she got a little bit tired, and that’s my fault. We can correct all of that. That’s easy to correct.”

Naughty Gal. Lukas is excited about the potential of this 2-year-old Into Mischief filly. Owned by Holy Cow Stable, she showed why when she overwhelmed her opponents by 9 1/4 lengths and galloped out well on July 4 at Churchill Downs in her second career start. She is scheduled to step up to stakes competition here in the Aug. 7 Adirondack (G3). Lukas: “She is a gorgeous filly, big and strong. She ran to her form. She looked awfully good winning. We’ll find out a little bit more when she runs in stakes company.”

Ethereal Road. His name will be linked to a trivia question for decades to come. The decision to scratch him the day before the Kentucky Derby allowed Rich Strike to come off the also-eligible list. Rich Strike went on, of course, to pull the second greatest upset in Derby history at 80-1. Ethereal Road also missed the Belmont Stakes with a quarter crack. The Sir Barton winner came in a disappointing sixth in the June 25 Ohio Derby (G3) in his latest effort. Lukas: “I’m getting him tightened down. If he doesn’t make the (July 30) Jim Dandy (G2), we’ll go all the way to the (Aug. 27) Travers (G1) and try that or maybe some undercard stake.”

Lukas’ 16-horse string at Saratoga includes promising 2-year-olds. Regally bred Take Charge Briana, a filly by two-time Horse of the Year Curlin, is one to watch for.

Lukas is cautiously optimistic about his upcoming talent. “Everybody who trains horses likes his 2-year-olds to a certain degree,” he said. “We’ve got to make it happen and see it.”