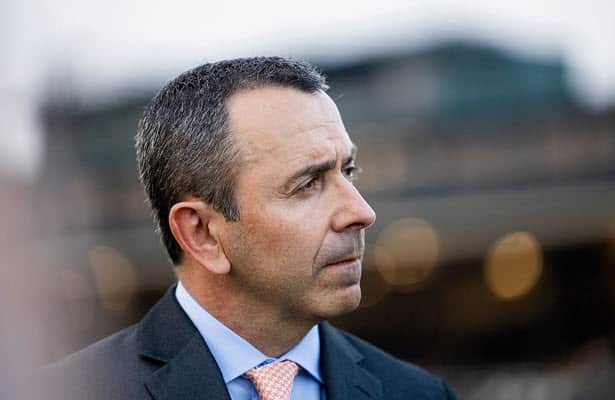 Paulo Lobo has had the best year of his career by earnings in 2021, eclipsing the $2 million mark for the first time since running his first horse in 2001. The trainer has won at a 20 percent clip this season, earning 43 wins, with two graded stakes among them.

Lobo will take one final crack at another graded stakes on Saturday at Gulfstream Park, when he plans to run Center Aisle in the Sugar Swirl (G3), a six-furlong sprint for fillies and mares age 3 and up. He updated Horse Racing Nation on her and other graded-stakes horses in his stable.

The Into Mischief filly enters the Sugar Swirl on a hot streak.

Then she won her last time out at Churchill Downs, going 6 1/2 furlongs.

“It’s important,” Lobo said of Saturday’s race. “Every time you run a mare in a graded stakes, it’s very important for the breeder, for all the connections. We’re very excited.”

The Sugar Swirl will be the third graded-stakes attempt for Center Aisle, who finished third behind Frank's Rockette last year's Prioress (G2) at Saratoga and the Victory Ride (G2) at Belmont, when she was trained by Chad Brown.

Frank’s Rockette is expected in this year's race, as is Bronx Beauty, who finished second in last year’s Sugar Swirl. Quinoa Tifah also is likely to run and has won a stakes over the main track at Gulfstream, the 2020 Our Dear Peggy.

Center Aisle will be ridden by Luis Saez in the Sugar Swirl. Lobo was optimistic for her chances in the race, given her previous experience at Gulfstream.

“Her first race was here,” Lobo said. “She knows that track.”

The Agnes Gold gelding had a successful season in 2021, earning three wins, two of them in stakes races. Those came at Keeneland in the Keeneland Turf Mile (G1) in October, preceded by a division of the Tepin at Kentucky Downs.

After those wins, In Love headed to Del Mar for the Breeders’ Cup Mile. After getting bumped around early, he ran well late to finish seventh.

Lobo said the gelding will be taking some time off.

“In Love and Ivar, they’re in Lexington, Ky.,” Lobo said, noting that they will be back “Next year, April or May.”

Just like his stablemate In Love, Ivar also ran in the Breeders’ Cup Mile at Del Mar, where he was gaining at the end of the race, finishing in third place. Before that, he ran twice in 2021, finishing fourth in the Keeneland Turf Mile and sixth in the Turf Classic (G1) at Churchill Downs.

The 5-year-old Treasure Beach horse was supposed to be Lobo’s third entry in the 2021 Breeder’s Cup. But Imperador wound up not making the trip to Del Mar after appearing off during a gallop the week before the race.

Before that, he had put together a respectable 2021 season, highlighted by a Grade 1 place in the United Nations at Monmouth Park in July and a win in the Calumet Turf Cup (G1) in September.

Lobo said Imperador also is done for the year and is taking time off.