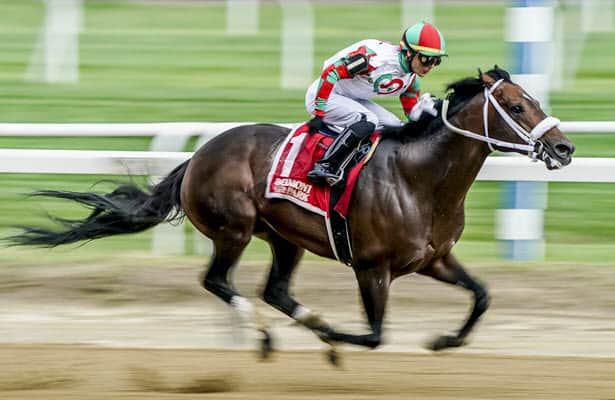 Photo: Scott Serio/Eclipse Sportswire
Check out Barn Tours on Horse Racing Nation
If you have read anything in the last few months about trainer Kelly Breen, it likely had to do with 6-year-old Firenze Fire, who gained notoriety after trying to bite Yaupon in the stretch of the Forego Stakes (G1).

Ahead of Saturday's Vosburgh (G2) at Keeneland, Breen told Horse Racing Nation last week – correctly – that he thought the incident was "a one-time deal." Despite breaking out of the gate ahead of the race, Firenze Fire went on to finish second.

Breen told HRN Monday that his next start will be in the Breeders' Cup Sprint.

"That's the game plan as of right now. I know (the Vosburgh) was a big race, and I want to point out one thing in particular – he did break through the gate before the start. And maybe it's my own pet peeve, but I've seen less than, like, 5 percent of horses that busted through the gates that actually run a top performance. Whatever it does to them, their psyche, their heart rate, whatever you want to call it – mojo? I don't care. But I haven't seen too many horses do that. …

"But he still ran well. We're still going forward and I think with a bigger field and maybe a heated pace, we'll probably be coming from just off the pace. We still have plans on winning the Breeders Cup Sprint."

Breen also provided updates on his other top horses for the latest edition of HRN's Barn Tour series.

Yes This Time began a five-race winning streak in February, culminating with a win in the Kent Stakes (G3) in July. His next start will be in the Bryan Station, a new, $150,000 stakes at Keeneland for 3-year-olds going one mile on turf.

Pickin' Time won the black-type New Jersey Breeders Handicap in August and then finished second to Jackie's Warrior in the Gallant Bob (G2) on Sept. 25. His next start will be in another new stakes at Keeneland, the $150,000 Perryville for 3-year-olds going seven furlongs on turf.

Another Breen trainee, Newbomb, is 3-for-5 this year, but the trainer said he has not determined the next start for the 3-year-old Speightstown colt.