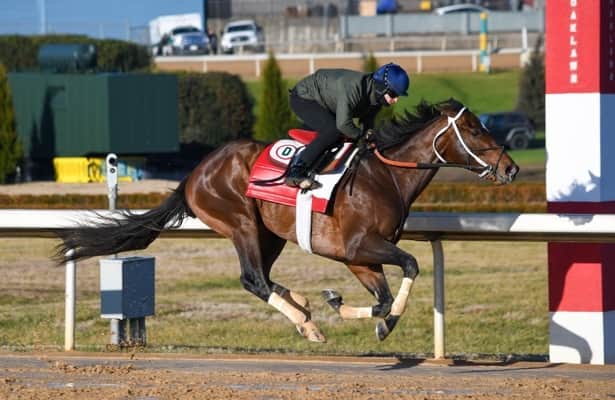 Robertino Diodoro enjoyed “a dream come true” on May 1 when he saddled Keepmeinmind to run in the 2021 Kentucky Derby.

Keepmeinmind finished seventh at Churchill Downs and then fourth two weeks later in the Preakness Stakes. The Laoban colt gave the veteran trainer Diodoro his first taste of those two Triple Crown events.

“I’ve got the itch to get back there very badly ASAP,” Diodoro said. “It’s kind of like the first time I ran a horse in the Breeders’ Cup in 2013 (Broadway Empire in the Dirt Mile) and I couldn’t wait to get back. It took seven years to get back (with Dreamer’s Disease and Keepmeinmind in the 2020 Juvenile).

“Hopefully it doesn’t take that long to get back to the Derby and Preakness, for sure.”

Diodoro’s sizable stable has competed this year across the U.S. in events ranging from American classics to claiming races. His 144 training victories in 2021 through Monday ranked fifth-most across North America, and his 544 starts ranked sixth.

The Canada-born Diodoro is based in Hot Springs, Ark., where he saddled 44 winners this spring during Oaklawn Park’s 2021 meet. Those Oaklawn training wins ranked second only to Steve Asmussen’s 60.

“It’s been a fun year so far,” Diodoro said, “and hopefully we can finish the second half of 2021 strong.”

Diodoro is now spending time at Saratoga, where his Charlie’sarchangel started the Spa’s 2021 meet Thursday by winning a claiming race. He also has strings at Canterbury Park and Louisiana Downs.

Horse Racing Nation spoke to Diodoro about summer plans for his stable as part of our Barn Tour series.

Keepmeinmind. After his Kentucky Derby and Preakness efforts, the colt returned to the races June 26 at Thistledown and ran third in the Grade 3 Ohio Derby.

The 3-year-old has breezed twice at Saratoga since that start and moved four furlongs Saturday in 47.40 seconds, second fastest of 139 works over the track at that distance. He will work again Saturday, then contest the $600,000 Jim Dandy Stakes (G2) on July 31.

Keepmeinmind approaches the Jim Dandy with only one career victory, which came last November at Churchill in the Kentucky Jockey Club Stakes (G2). He will run for his second win against a field expected to include Belmont Stakes hero Essential Quality and Ohio Derby victor Masqueparade, among others.

“He’s got his work cut out for him,” Diodoro said. “But he’s coming off a fairly decent race and just as easily could’ve won it. He shipped up to Saratoga quite well and his last couple works and gallop-outs have been very, very impressive.”

Lone Rock. Diodoro celebrated a win on the 2021 Belmont Stakes undercard thanks to the 6-year-old winner of the 1 1/2-mile Brooklyn Stakes (G2).

The Majestic Warrior gelding has found a niche at the marathon distance and will run next in the $120,000 Birdstone Stakes at 1 3/4 miles on Aug. 5 at Saratoga. He breezed four furlongs there Thursday in 51.49 seconds.

Lone Rock has won four of five starts in 2021, including the Brooklyn and the Isaac Murphy Marathon Overnight Stakes in April at Churchill. He also collected a pair of Oaklawn allowance wins earlier in the season.

“The longer we train him, the stronger he gets,” Diodoro said. “Same with the afternoons. He seems like a horse that wants to run all day all of a sudden. I think he knows he’s on a roll because he’s been training like a monster. He knows he’s the king of the barn right now.”

American Dubai. The 8-year-old son of E Dubai is entered in Wednesday’s ninth race at Saratoga, an allowance optional claiming event over the dirt at 1 1/8 miles. He is 10-1 on the morning line and is in for a $100,000 tag.

American Dubai won an Oaklawn allowance in April and was fourth last out at Churchill in the Blame Stakes. He contested the 2016 Kentucky Derby trail, then spent much of his career on the New Mexico circuit and will make his first New York start Wednesday.

She is two-time graded stakes-placed, having finished third in Saratoga’s 2020 Adirondack (G2) and second in April at Oaklawn in the Fantasy (G3).

Another New York Stallion Stakes Series race on July 28 at Saratoga is the next assignment for Dreamer’s Disease, Diodoro said.

Dreamer’s Disease won a Keeneland allowance race last October, but a fifth-place finish in May’s Texas Derby is his best finish in five races since.

Drena’s Star. The First Samurai gelding sports three wins so far in 2021, including an allowance victory in April at Oaklawn. He is now at Canterbury Park, where he won the Honor the Hero Stakes in May.

Game Day Play. The 3-year-old Violence gelding is “on the shelf for a while,” Diodoro said. A Remington Park stakes winner in 2020, he was sixth last out in May at Churchill in the Matt Winn Stakes (G3).

Thomas Shelby. The 5-year-old Curlin gelding gave Diodoro his final victory of the 2021 Oaklawn meet on closing day in May when taking an allowance race. He has raced three times since at Lone Star, notching a pair of starter allowance wins.

Thomas Shelby is headed to Saratoga, Diodoro said, where he likely will run in a claiming race.

Regarding other potential Saratoga starters, Diodoro referenced unnamed 2-year-olds who are approaching their racing debuts.

“We want to get more young horses and hopefully stakes horses in the barn,” Diodoro said.