Jamie Ness explains why he dominates at Parx, Delaware Park 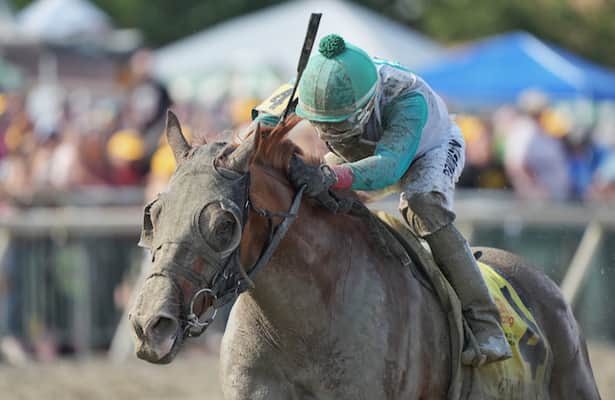 Trainer Jamie Ness has a simple explanation for why he's so successful at Parx. And Delaware Park. And Laurel Park.

"The Parx condition book's a little more conducive to the stable I run. I kind of run a blue-collar stable – mid-level and upper-level claiming races – and a lot of those races go (to Parx)," Ness told Horse Racing Nation Wednesday morning.

Laurel Park runs more turf races in the summer, he said, and he prefers the main track. "So we don't run as much there as we do in the fall, winter. And Delaware's home base for me, pretty much, where I keep a lot of my young horses. … I keep my hands on all three strings at the same time."

It's a strategy that works. Ness is the leading trainer at Parx this year, with 104 wins from 332 starts – a 31 percent win rate. His closest competitor has 40 wins. You'll find similar results for the previous two years as well.

Ditto for Delaware, where he has 28 wins from 96 starts and has won the training title nine years in a row (one of those was a tie). The figures from Laurel show top 10 finishes in the most recent fall and winter meets.

It also helps that all are along the Interstate 95 corridor, where he lives and operates his stable, Jagger Inc.

Most of his 120 or so runners are starter allowance or claiming types. But he is aiming to win a couple of stakes that he took last year with two of his horses.

Magic Michael is a 5-year-old co-owned by Ness. He's 0-for-3 in stakes at Parx, Delaware and Laurel this year, but those include two third-place efforts. Last year, he won the Greenwood Cup (G3) by a neck over Last Samurai, and Ness is pointing him there again this year.

You Must Chill, also co-owned by Jaggers, has four wins from seven starts this year. The 6-year-old Pennsylvania-bred gelding won the black-type Alphabet Soup at Parx last year, and Ness is looking for a repeat in September.

Ness said he has "quite a few" 2-year-olds coming up, but "I like to take a little bit of time with my 2-year-olds unless they're very precocious. I've got a few coming down the pipeline I think are going to be OK."

One of those is Chickieness, a filly who was bred and is co-owned by Jaggers. She finished second against males in her debut and then won her next start against fillies. "I ran her mom (Chickaletta) at Parx, she had some bad knees, we retired her, bred her. It's her first foal. She's come in and very precocious and we think a lot of her." He said he's point her toward Delaware and Maryland in the fall.