Barn Tour: In a career year, what's ahead for Rob Atras? 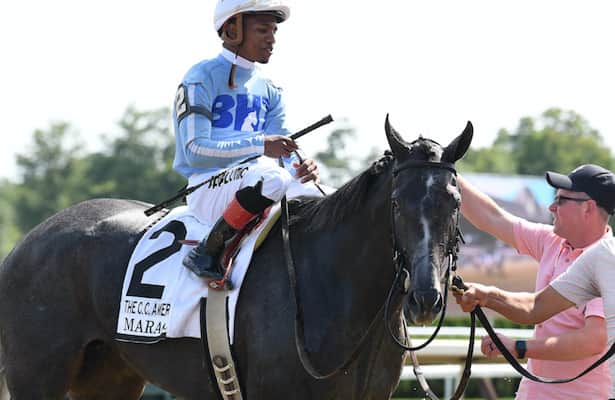 Photo: Susie Raisher / NYRA
Check out Barn Tours on Horse Racing Nation
It has been a very good year for New York-based trainer Rob Atras. His best year since he started training in 2009, in fact.

Atras is about $60,000 away from the $4 million earnings mark. That is almost double his previous high of $2.1 million last year. And last year was the first time he broke into the top 100 trainers, ranked by earnings.

Atras was at Belmont Park on Tuesday, and he provided Horse Racing Nation with a rundown of his top starters for the latest in our Barn Tour series.

Maracuja. After the CCA Oaks, the Honor Code filly finished seventh in the Alabama (G1) and fourth in the Cotillion (G1) in September. After that race, Atras said, "we sent her to the farm in Kentucky for 60 days. And she actually just came back a few weeks ago, and she's here at Belmont training right now. She's pretty much ready to breeze now. And right now the plan with her is to go down to Oaklawn and target a race in early March."

The goal for Maracuja is the April 23 Apple Blossom (G1), with a prep in either an allowance race or the Azeri (G2) in March. "She's just been in training for so long, and I just thought now's a good time to give her a little freshening, give her a little rest, because she'd been hard training for probably a year and a half straight."

Chateau. The Tom Fool score gave the 6-year-old gelding a 2-for-2 start to the year. He then went winless in his next five starts, albeit with a fourth-place finish in the Carter (G1) and a third-place effort in the Fall Highweight (G3). Last out brought a 3 1/2-length win in the listed Gravesend Stakes on Sunday.

"He got a pretty easy lead, but I was really happy the way he ran and finished up. I think he might have just needed the (Fall Highweight). He really had the battle to get that front end, and it kind of hindered him late. And so he came back in three weeks and ran a real impressive race. We don't have a plan with him going forward yet. The next six-furlong stake in Aqueduct isn't until March 5, I think it's the Tom Fool, so we don't have a plan for him between now and then."

American Power. The 6-year-old son of Power Broker won only the Caixa Electronica starter stakes after his win in the Toboggan, but he had a strong third-place showing behind Firenze Fire and Flagstaff in the True North (G2). His last race was a fifth-place finish in a Saratoga allowance.

"He actually is on the farm right now. He just wasn't quite himself. It was nothing really serious. He just he just didn't look himself, wasn't breezing the same. And we just decided to shut him down for 60 days. He went to Kentucky to a farm and hopefully comes back the same."

Sadie Lady. In her first three starts of the year, she won two races and placed second in the Vagrancy (G3). Then the 5-year-old mare finished fourth in stakes at Saratoga and Aqueduct, both on sloppy tracks.

"I never like to make too many excuses, but it just seems like she never runs her best race on sloppy track. And that's what she caught her last two races, where I thought she would potentially win. And I looked at her form. And her last race was on the sloppy track, then we turned her out, brought her back, she's doing really good. Rain came, track was sloppy again, and she ran the exact same way. She had an easy lead, looked like she was going to kick on of her own, which she normally does, and she kind of stopped on us. And then the rider got off and said the same thing. He thought he had enough horse to win it. And when he went to set her down, she just kind of just didn't get ahold of it."

So what's next? "There's two New York-bred races coming up. One's seven eighths in three weeks, or maybe it's two weeks, and the other one is not until February. So we've got to make a decision whether we're going to go in the seven eighths or wait for the six-furlong race. I think it's Febr. 5. She prefers six furlongs, so I've just got to talk to the owners and see what they want to do."

Atras said that among his 2-year-olds, "we had a couple of setbacks, or two or three of them – mostly nothing serious."

But he mentioned Impressionist, a gelded son of Mission Impazible, who finished third in his debut at Aqueduct on Dec. 5. "He just had a little trouble at the start, and then he got left probably about 10 lengths, and he actually ran a real fast-closing third. He's a New York-bred, New York-sired horse. So we're looking forward to running into him again."