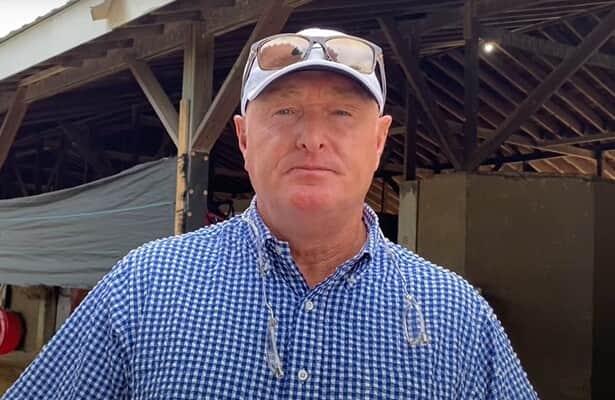 Trainer Randy Morse has been hot as a pistol to begin the Churchill Downs fall meet, winning in five of his 11 starts so far and even showing up with one horse in Las Vegas futures for the 2022 Kentucky Derby.

Morse said the run of success is due to several of his horses coming ready at the same time.

“It’s just one of those deals,” Morse told Horse Racing Nation on Tuesday. “I had a lot of horses fit some conditions, and some things fell into place. It’s supposed to go like that every once in a while.”

Texas Red Hot is rising to become a potential star in Morse’s barn. The 2-year-old Texas Red colt most recently won an allowance race at Churchill Downs on Oct. 31.

In that race he sat in ninth place after the first quarter-mile before coming back to take the lead down the stretch, winning by 1 1/2 lengths.

Before that the colt tried a stakes race, finishing fourth in the Ellis Park Juvenile on Aug. 15. Morse said that was the only time he had seen Texas Red Hot not run well, but said he flipped in the paddock ahead of the race.

“We probably should have scratched,” Morse said. “He’d never done that before, and after that they usually don’t run their best.”

The colt showed up in the Derby futures at Caesars at William Hill at 175-1. Despite those long odds, Morse said the colt could very well end up being pointed toward the Derby road.

The trainer said he is leaning toward entering Texas Red Hot in the Kentucky Jockey Club (G2) on Nov. 27 at Churchill Downs. That race offers Derby points payouts of 10-4-2-1 to the top four finishers.

“He’s still got to prove it,” Morse said. “I think he’s a very talented horse. He keeps getting in these races where his speed figures and sheet numbers are not very good, but I just think there’s a whole lot more that we haven’t seen of him, because he just kind of does what he needs to do.”
Morse may be long on lower-level starters. He did offer thoughts about two other horses in a brief Barn Tour for HRN.

Verylittlecents. The 2-year-old Goldencents filly finished third in her two most recent trips, the Myrtlewood at Keeneland and the Aristocrat Juvenile at Kentucky Downs. Before that she won the Ellis Park Debutante in August. “I’m going to run her in the sprint stakes on the same day,” Morse said, speaking of the $200,000 Fern Creek, a listed, 6 1/2-furlong stakes for 2-year-old fillies on Nov. 27 at Churchill Downs on the same card as the Kentucky Jockey Club.

Connie K. The winner of an allowance race in her most recent trip at Churchill Downs, the 3-year-old, Arkansas-bred, Street Strategy filly will wait a bit for her next race. “She’s ‘a-other-than’; we’re going to wait on that for her,” Morse said. “Unfortunately we start (at Oaklawn Park) in December, and they don’t even have an ‘a-other-than’ for Arkansas-bred the entire book.”