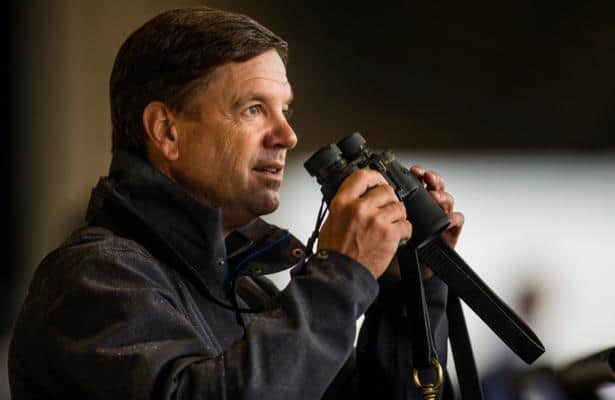 "My goal had been to get her to the Breeders' Cup for (owner Alex Campbell Jr.), so between losing her and Sharing earlier in the year, it has left a big void in our stable," Motion told Horse Racing Nation Tuesday.

But he still has plenty to keep him occupied, and he provided a rundown of his top horses and promising juveniles for the latest in HRN's Barn Tour series.

Wootton Asset got his first win of the year last out in the Virginia Derby (G3). Motion said he will start next in the Twilight Derby (G2) on Halloween at Santa Anita, where he might meet Rock Your World on his return to turf.

Caravel won three of her first four starts, including the Caress Stakes (G3) and finished sixth in Saturday's Turf Monster (G3) at Parx. The 4-year-old "probably is going to California," Motion said, either for the Breeders' Cup or the Senator Ken Maddy (G3) on the Nov. 5 Breeders' Cup undercard at Del Mar.

Oyster Box is having a good year, hitting the board in all five starts this year, but she has not won since January. Last out, the 3-year-old Tapit filly finished second in the Pucker Up (G3) at Arlington. Motion said she will run Saturday in the All Along Stakes at Laurel Park, facing older for the first time. "My biggest quandary with her is actually what distance she wants to go because I question – even though her mom (Starformer) was like a mile-and-a-quarter type, I question how far she wants to go. So I had her in the Pebbles the other day and she had a really bad post to reckon with, 13, so I scratched her."

Tuned has won his last two starts, most recently the black-type Old Nelson Stakes at Colonial Downs. She also will run in the All Along.

Invincible Gal, a 4-year-old filly looking for her first win since she broke her maiden last August at Saratoga, is pointed to the listed Glen Cove at Belmont on Oct. 15.

Blame Debbie won her first race of the year, the Searching Stakes at Pimlico in June, but the 4-year-old has not won since. "She was not 100 percent after her last race, so I sent her to the farm in Kentucky," Motion said.

Among Motion's juveniles, Sparkle Blue, a Hard Spun filly, won her debut at Colonial Downs last month. She will start Saturday in the Selima Stakes at Laurel Park.

Luna Antonia, a Malibu Moon filly who finished third in her debut Sept. 9 at Laurel, also will run in the Selima.

High Stock, a Noble Mission colt who graduated on second try on Sept. 18, is pointed to Saturday's Futurity at Laurel.