Barn Tour: Motion on what's next for Mean Mary, other stars 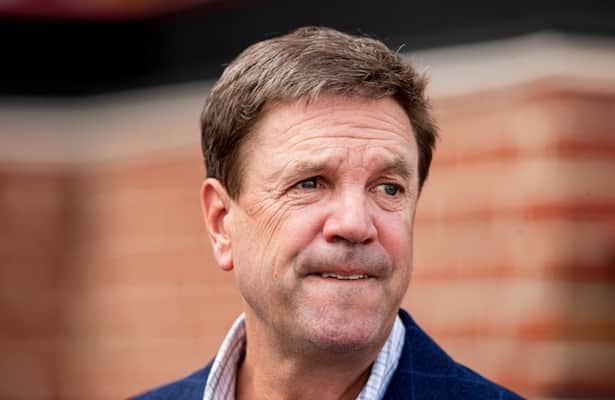 When Mean Mary won by a nose in the New York Stakes (G2) on June 4, she became the newest millionaire in Graham Motion's stable.

"I tried to go easy on her this last race, because I ran her back really quickly. She will be nominated to the United Nations. But I could just wait for the Beverly D and kind of – you know, we'll see how things go."

Motion also provided an update on his other stable stars.

Blame Debbie. The 4-year-old filly made her 2021 debut with a win in the black-type Searching Stakes at Pimlico on Sunday. "She'll be nominated to the Robert Dick (G3) at Delaware, which comes back in four weeks from her start the other day," Motion said. "It's a local race, it's graded, it's a mile and three. Seems like a fairly logical spot if she's doing well."

Bye Bye Melvin. His last out was a 10th-place finish in the Manhattan Stakes (G1) on June 5. Before that, he was fourth in the Dinner Party (G2) after starting the year with a second-place finish in a Keeneland allowance. "I'm a little unsure about where I'm going with him. You know, I kind of threw him to the wolves a little bit last time and he was very keen, he didn't settle very well, it was just too much for him. I do think he's that kind of horse. I just need to kind of figure him out a little better and place him a little better."

True Valour. The 7-year-old has not raced since his sixth-place finish in the Al Quoz Sprint in March. "He came back from Dubai and we got him back in training. And he had an injury at the bottom of his cannon bone that he had a small screw placed in, so he's having some time off. … There's no reason he can't come back, from a physical point of view. Fortunately, we caught it pretty quickly."

Mia Martina. Eased to the finish in the Gazelle (G3) on April 3, she came back with a fourth-place showing in the Hilltop at Pimlico in May. She was scratched from the June 3 Wonder Again (G3). "It was a very competitive race. It was coming back very quickly after Pimlico, it was three weeks after Pimlico. And we just decided to be more patient," Motion said. "We could run in a local spot like the Boiling Springs or the Christiana. Or we could try and get an invitation to the Belmont Oaks, which I think distance-wise would really suit."

Alba. She was the winner of the Hilltop, her first score in three starts since winning the Catch A Glimpse at Woodbine in August. Motion said she probably will come back in the Wild Applause at Belmont on June 26.

Invincible Gal. In her 2021 debut, she was second by a neck in the Soaring Softly (G3) in May. Motion said her next start could be in the Tepin at Churchill Downs on June 26.

Crystal Cliffs. The 4-year-old filly with a career record of 5: 2-2-1 was a nose away from winning Dahlia Stakes in April, her only start this year. She will start in the Eatontown (G3) on Sunday at Monmouth Park.

Ziyad. The 6-year-old gelding has had a rocky 2021, with sixth-place finishes in the Belmont Gold Cup (G2) and Man o' War (G1). "I want to get him in an easier spot. I've kind of thrown him in a couple of tough spots as well. A good chance he could come back at Arlington in the Arlington Stakes. That's a possibility."

Tuned. The 6-year-old mare is 0-for-4 this year, last finishing sixth in the Mint Julep (G3) on Saturday. "Tuned was disappointing the other night. She had kind of like a crazy trip – went to Texas, they took it off the grass, so we ran her in Kentucky. We'll regroup with her. Thought we'd give her a little freshening, let her get over her travels."