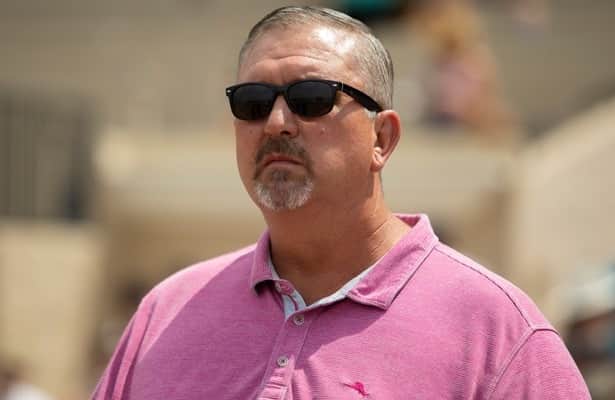 Southern California-based trainer Mark Glatt just had the most lucrative season of his 25-plus-year career in 2021.

The native of Spokane, Wash., who turns 48 on Saturday, banked more than $3.6 million in purse earnings last year while winning at an 18 percent clip. Glatt’s previous high for earnings in a season came in 2019 when the likes of graded-stakes winners Eddie Haskell, Law Abidin Citizen and Collusion Illusion helped push the bankroll to just over $3.3 million.

Collusion Illusion went on to become Glatt’s first Grade 1 winner  the following year when winning the 2020 Bing Crosby. A month later, the trainer gained a second when Dr. Schivel took down the Del Mar Futurity (G1).

On Wednesday at Santa Anita, Glatt provided Horse Racing Nation with the latest on both those top-class sprinters as well other top talents.

Dr. Schivel. It remains to be seen how the voting shakes out for champion male sprinter after Dr. Schivel’s disappointing effort in the Dec. 26 Malibu (G1). Connections hoped that another Grade 1 win after a tough-luck nose loss in the Breeders’ Cup Sprint would lock up the Eclipse Award for the son of Violence.

Instead, it remains a wide-open battle between Dr. Schivel, Jackie’s Warrior and possibly Golden Pal or Flightline.

In the Malibu, Dr. Schivel had only two horses beat after the opening half mile and ultimately checked in last behind Flightline’s dominating performance. Glatt pointed out the lackluster performance in the Malibu was likely because of an oncoming illness.

“It was a virus,” he said. “The blood work stayed pretty normal, he just had a temperature that kind of fluctuated on him and he wasn’t quite 100 percent.”

The immediate future for the now 4-year-old Dr. Schivel, who beat older horses last year in the Bing Crosby (G1) at Del Mar and Santa Anita Sprint Championship, remains to be determined.

“He's probably going to go back to the racetrack here in a day or two,” Glatt said. “We never really had a chance to fully evaluate him because he was sick. So we'll mess around with him here for the next four or five days, see where we are at and decide what’s best for him moving forward.

“Maybe we’ll give him a little bit of a vacation and point to something later in the spring,” he added.”

Collusion Illusion. Winner of the 2020 Bing Crosby (G1) as a 3-year-old, the son of Twirling Candy was limited to two starts a season ago. He finished off the board when trying turf for the first time in the Aug. 22 Green Flash (G3) at Del Mar after nearly eight months away, then was fifth in the Oct. 2 Santa Anita Sprint Championship.

Collusion Illusion has been working at Santa Anita for his 5-year-old debut, which is planned for later this month. He will head to Oaklawn Park to contest the $150,000 King Cotton Stakes going six furlongs on Jan. 29.

“He can run in a stakes and run on Lasix there,” Glatt noted. In California, the anti-bleeding medication is prohibited in stakes races.

Beer Can Man. The graded-stakes winner has been a model of consistency, having not failed to hit the board since his maiden win in August 2020, a stretch of nine starts. Last Saturday, Glatt suffered another nose loss in a graded stakes when the 4-year-old son of Can the Man came up just short against eastern invader Chewing Gum for Bill Mott in the Joe Hernandez (G2).

Prior to that race, Beer Can Man won an allowance at Del Mar and was second in the Turf Monster (G3) at Parx when shipped east in September.

Glatt said Beer Can Man likely would return in the $100,000 San Simeon (G3) on Santa Anita’s downhill turf course before heading east to go Grade 1 hunting in the Jaipur Stakes at Belmont Park in early June.

“I think we're probably going to point to that for now,” he said of the Santa Anita's San Simeon. “And then, after that, I think we want to look at the Jaipur. We’ll maybe need to schedule a little break in there at some point, but we’ll see.”

Maglev. The Irish-bred 3-year-old made his stateside debut on Saturday in the listed Eddie Logan Stakes at Santa Anita and found himself a ton of trouble before rallying for second. Sent off the 2-1 favorite in the one-mile Eddie Logan on turf, Maglev broke last and was rank early under Umberto Rispoli. He then was blocked on the far turn until finally being able sneak through along the rail to get up for second, 1 1/2 lengths behind winner Cabo Spirit.

By Galileo Gold, Maglev made five starts in England before arriving at Santa Anita towards the end of 2021.

“He’s a very talented horse and we’re really excited about him moving forward, but he’s really aggressive,” Glatt said. “That’s been his history, even overseas. So we’ve got to continue to work on getting that horse to kind of do things the right way. I think if we can, he could really become a top 3-year-old here in California.”

A start on the downhill turf course at Santa Anita could be next for Maglev, Glatt added.

“If he ever drops the bit early, relaxes and then kicks, he could have a serious turn of foot."

Zipse: Charge It charges into prominence with Dwyer runaway
As promising as Charge It looked in his first thre...
x