Barn Tour: Gargan has plenty of talent beyond Dubyuhnell 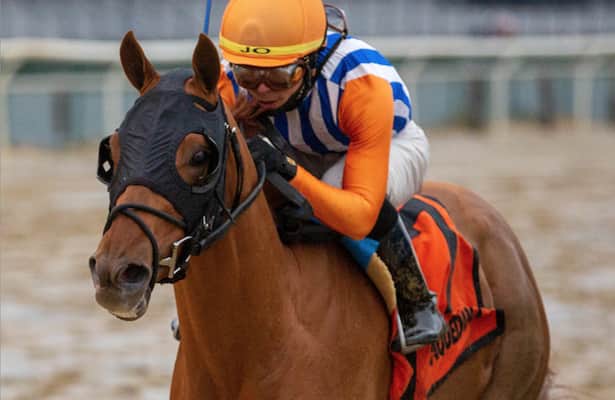 The horse of the moment in Danny Gargan's barn is Dubyuhnell, winner of Saturday's Grade 2 Remsen for his second straight victory in three starts.

“He's obviously a star star pupil right now,” Gargan said. “But he's been a horse that I've been talking about. And I still think he's got a lot of improvement to do. And I think he could be a future star.”

Gargan spoke to Horse Racing Nation Monday from Charleston, S.C., where he was taking a break on a drive to Florida. He has about 40 horses in training, and he winters the bulk of them in Florida. He discussed Dubyuhnell and other talent in his stable for the latest in HRN’s Barn Tour series.

Dubyuhnell. The Good Magic colt out of Wild Gams also was traveling to Florida and was set to arrive Tuesday. Gargan said he has yet to decide what route will take on the road to the Kentucky Derby.

“He could run once in Florida,” Gargan said. “He could go back and run in the Withers. There's a lot of options. If Tex Sutton was around, there'd be more options. But we don't have that luxury anymore. He could run once in Florida and then could end up in the Bluegrass or the Wood, or the Florida Derby is an option also. We're not putting anything in stone, but we think he's that kind of horse.”

Of Dubyuhnell’s Remsen effort with Jose Ortiz aboard, Gargan said, “I mean, that was a big performance. And he does it with his ears pricked, playing around. Jose really, really thinks he's got a lot of horse left. He says he's mature and he runs in spots. He's just kind of playing around.

“He's just naturally talented,” Gargan continued. “We don't take our horses out and lay them down in the morning to really teach them to run all out. I think with more racing, he'll eventually get faster and run bigger races. But he's got to find a horse that can run with him. He likes to hang around with the other horse. And he didn't want to leave his partner the other day. He was with him, but then he got in front of him and he kind of put his ears up and was like, Oh, is there anybody out here? Where's somebody at? So he's kind of waiting on his competition right now.”

Champions Dream. The Justify colt is another Gargan winner on the Derby trail, winning the Nashua (G2) after finishing fifth in the Champagne (G1). The trainer said he doesn’t know what the next step will be for the colt.

Listentothemusic. This 2-year-old son of Maclean’s Music is “a really nice colt” who has tried twice to break his maiden, finishing second last out at Belmont at the Big A. Gargan plans to start him next on Dec. 17 at Gulfstream. “I think he'll end up being a grass sprint stake course. … He kind of lost his way when they canceled all the grass racing in New York.”

Apres. She’s an unraced 2-year-old daughter of Lord Nelson who we “think is going to be a really nice horse,” Gargan said. “A well-bred filly, and she'll make her start down in Florida. … We're excited about getting her started here, probably around January. We think she has a big future.”

Tax. The 6-year-old son of Arch returned to racing in July after a year-and-a-half off because of injuries. He ran in seven graded stakes in 2019, including the Kentucky Derby (finishing 14th), the Belmont Stakes (fourth) and a win in the Jim Dandy (G2). He won a stakes in July before finishing eighth in the Jockey Club Gold Cup (G1) and then second in a Parx stakes last out.

“We're going to probably run him in a race at the Fair Grounds, a stakes, or the stakes he won, the Harlan’s Holiday (G3) at Gulfstream. … He was second last time in the stakes. I really wasn't pleased with his ride that day, He chased the horse and collapsed, he got run down. But he's doing well, cool horse. He's a millionaire, so that's kind of fun to have. We ran him in the Derby, and I think that's probably my biggest training accomplishment, that he ran in the Derby. And he ended up winning multiple stakes after. Being on the Derby trail can really tear your horse up.”

Dakota Gold. The 3-year-old son of Freud is 2-for-4 this year, with both wins in New York Stallion stakes, and was fourth last out in the Gio Ponti Stakes at Aqueduct with jockey Manny Franco. “I was a little frustrated after that race. But he's kind of a difficult horse to ride, and it was Manny's first time riding him and getting to know him. You know, he fought, he fought hard once and he got beat once because he kind of shuffles himself back, drops a bit, and it takes a minute to get him focused.”

He’ll run next in the Tropical Park Derby at Gulfstream on Dec. 26 with another Gargan trainee, Riot House, a Violence colt who was fifth in the Gio Ponti. “They're both really nice horses,” Gargan said.

Missy Greer. This 3-year-old Nyquist filly raced only twice last year and has a 7: 2-1-2 record this year, finishing second on Thursday in an allowance optional claiming race at Aqueduct. “The other day, she went a little too fast,” Gargan said. “Really well-bred filly. She'll maybe make one more start in New York, and then I'm going to freshen her up and then spot her around for a campaign as a 4-year-old. I need to win a stakes with her somewhere. Because she's Gronkowski's half-sister, and she has a really nice pedigree and hopefully we can get her a stakes win. And then she can go be a broodmare at the end of next year. But she's a beautiful horse.”

James Aloysius. This 3-year-old colt with only two starts is “my most talented horse,” Gargan said. He raced once last year and again in April this year. “He's going to start back working next week in Florida. He's a More than Ready colt, and I do think he's probably one of my most talented horses I train. He just had some setbacks with shins. And we're really excited about his 4-year-old career. He ran second first time out as a 2-year-old and got a shin and then came back as a 3-year-old and did it again. So now we just gave him enough time that we think we've waited it out long enough that we really expect to have a big 4-year-old year with him. He's a really talented horse.”