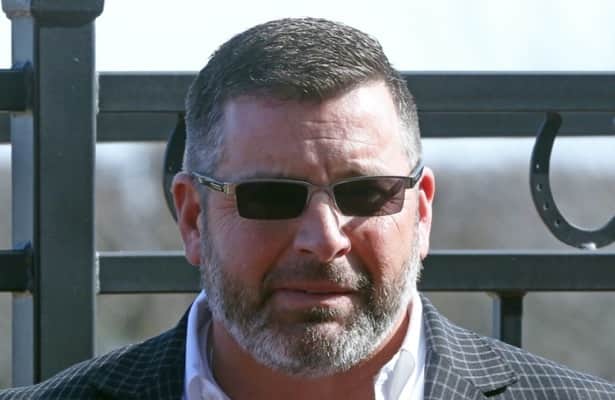 It has been “quite a summer” for Robertino Diodoro, who has seen about 15 of his upper-level horses sidelined in recent days.

"The only good thing was nothing was serious or career-ending, just things that needed some time or were minor surgeries. But it's kind of a rough road lately, but again, nothing that needs six months or a year off and nothing that's life-threatening. So it always could be worse.”

Speaking from Arkansas before taking off Wednesday for Saratoga, Diodoro provided updates on his leading horses – on the shelf or otherwise – for the latest in HRN’s Barn Tour series.

Ava’s Grace. The 4-year-old Laoban filly finished fifth last out in the July 2 Fleur de Lis (G2) at Churchill Downs. Her lone win this year came in an allowance optional claiming race at Oaklawn, but she finished third behind Pauline’s Pearl and Shedaresthedevil in the La Troienne (G1) on the Kentucky Oaks undercard. “She had minor surgery, is back in training, and we'll see her later in the fall. We don't have anything picked out for her quite yet. But she's doing well.”

Market Analysis. The 5-year-old gelding sired by Honor Code won his last race, the black-type Spangled Jimmy at Century Mile, for his third win in three starts this year. “He's another one had surgery, and you will not see him until the start of Oaklawn.”

Lone Rock. He has two stakes wins from five starts this year and last out was third in the Birdstone at Saratoga on July 28. The 7-year-old son of Majestic Warrior is “doing good, but he just went to the farm for a rest. And we're going to bring him back the first of October. He's coming to Arkansas, going to start swimming, and have him ready for the Oaklawn meet as well. So he's out of action for right now too – nothing wrong. Everything's good. But it's time to give him a little bit of a break.”

Dream Lith. The 3-year-old filly by Medaglia d’Oro, winner of the Golden Rod (G2) to close out last year, is winless this year, though she finished third last out in the Acorn (G1) at Belmont on June 11. “She had a little time off, and she's slowly coming back. No surgery or anything. But again, it seems like we're going to have a lot of fresh horses for fall time. But that's not always bad, it's just a little bit rough on the mind at this time of year because, as you can see, our wins have been very slow of late. But again, I kind of knew this coming out of Oaklawn, it was just going to be kind of a rebuilding summer and regrouping. It's turned out that way, definitely. Got to get through it and be ready for fall.”

Outofnothingatall. Another 1-for-1 juvenile, he was sired by Super Saver and broke his maiden at Evangeline on July 7 while under the care of Ricky Courville. He’ll fly to Del Mar on Wednesday to run in the Sorrento (G2). “I'd like to have had another race under her. You know, anytime you go to California, it's not easy. But she shows a lot of talent. And we'll see what happens. I know we're asking a lot of her but at the same time, she does have a lot of talent.”

Zaici. The 2-year-old ridgeling by Laoban broke his maiden on his second try at Churchill Downs on July 2. Diodoro said he will enter him in Sunday’s Ellis Park Juvenile. “He's doing really well. We love that horse. So keeping our fingers crossed with him.”

Lovely Ride. The 4-year-old Candy Ride filly has two seconds in three starts this year, most recently in the Mari Hulman George Memorial at Horseshoe Indianapolis on July 9. Diodoro said she will be supplemented on Wednesday for the Trillium (G3) at Woodbine on Saturday.

Red Knobs, a last-out winner in the Manitoba Derby, and Great Escape, looking for his first win this year, will run in the Canadian Derby (G3) at Century Mile on Aug. 20.