Barn Tour: Danny Gargan on Tax and his Saratoga winners 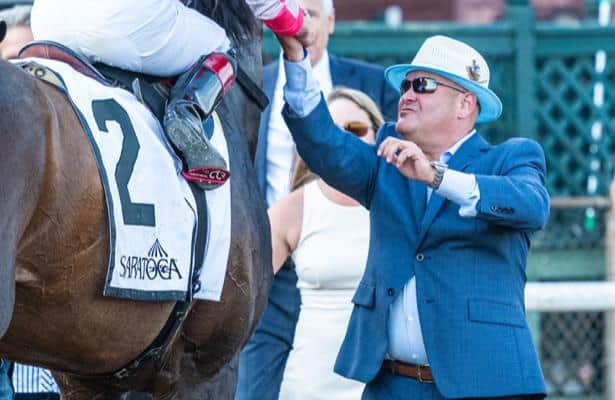 Danny Gargan is coming off a solid meet at Saratoga. With nine wins, he ranked No. 10, the second time in three years he has cracked the top 10.

Gargan keeps his stable at Saratoga after the meet, and he spoke to Horse Racing Nation from the track Wednesday for the latest in the Barn Tour series.

Gargan said his multiple-graded-stakes winner Tax, last seen finishing 10th in the Pegasus World Cup Invitational (G1), is back in training after recovering from a hind-leg sesamoid problem at Hogan Equine in New Jersey. "He'll start working here in a few weeks."

As for some of those Saratoga winners …

Ice Princess. After going winless in her first four starts this year, the 4-year-old filly won a 1 1/8-mile allowance race by four lengths. "We may run her in a stake at Belmont, a New York-bred stake, if not she'll run in a two-other-than."

Breakfastatbonnies. The 3-year-old filly broke her maiden on debut at Aqueduct and then finished third in an allowance at Belmont in March. After a break, she came back to win by a nose in an allowance race for New York-breds in July. "She's back breezing. Probably going to run her in a New York-bred stake towards the middle of the meet at Belmont."

Dakota Gold. This 2-year-old graduated on debut with what Gargan called a "pretty impressive" 4 1/2-length win at 5 1/2 furlongs. "He's either going to run in a New York-bred stake at Belmont or maybe the Pilgrim (G2)."

Another 2-year-old in Gargan's barn is James Aloysius, who debuted with a runner-up effort to Portfolio Company in a maiden special weight at Saratoga. "He's a nice horse," Gargan said, but he has had shin problems.

"I've got a filly that hasn't run yet that I really like named Missy Greer," Gargan said, adding that the daughter of Nyquist is "my most promising one that hasn't run."